Resurgam. Decoded from its Latin origins, the moniker for Fink’s latest album bears a clear message ‘to rise again’. With each of their previous records Fink have undoubtedly progressed their sound but the adjustment has always been made in subtle increments. So, as the band transition through their second decade, the desire to reshape and renew their sound is both exciting and commendable.

Resurgam stirs with its title track. Tim Thornton’s acoustic drums crackle under Guy Whitaker’s gurgling bass and a sense of welcome unease looms large. At minute two the cymbals kick into reverse and a haunting organ scratches the surface. For a split-second Radiohead’s 10/4 masterpiece ‘Everything in its Right Place’ sputters in the chord sequence only to dissolve into 6 minutes of sinister caustic trip-hop.

‘Day 22’ is up next and injects a groove into the fog. As the sub-bass pulses, detuned strings and distorted keys evoke film-noir terror. “These blood-shot eyes that gave me away”. Twilight prowl accelerates into haunting flight, as the song crashes to its close on a wave of digital churn.

For a band that set out their stall across a trilogy of sun-kissed folk records, track three and lead single ‘Cracks Appear’ feels much more familiar. Melodically the view is all sunset but the piano refrain and delayed guitars give a nod to the more ethereal horizons that occupied Perfect Darkness and Hard Believer.

‘Word to the Wise’ sees Fink at their most stripped back. Finn Greenall’s outstanding voice soars atop sparse piano chords and bittersweet words. “The clock is ticking / Every single second gets sweeter by the minute”. The optimism persists on follow up single ‘Not Everything Was Better in The Past’.

Fink are a band fully aware of their propensity for anthemic melodies. Notably they almost left their biggest hit to date, ‘Looking Too Closely’, off Hard Believer for being too obvious. The stadium swell that drives that song is still here, but in minimalist form, and with almost twenty years making music Greenall can be forgiven a wizened lyric or two. “Am I jaded by the notches on my belt / All I know is where I’ve been and how it felt”.

‘The Determined Cut’ is hewn from the same menacing rock as ‘Resurgam’, with a melody so similar it’s almost coda-like. Sadly, the song doesn’t quite get going and passes without note. ‘Godhead’ is up next and follows a similar blueprint. The final minute lifts out of a meditative climb into a superb percussive outro, evoking a raft of Ninja Tune’s mid-noughties pioneers. But just as the song is finding its feet, it’s gone. Frustrating.

‘This isn’t a Mistake’ sparks to an outtake of Greenall discussing his recording intentions. Finn’s vocal flickers in panned stereo as light-touch drums tumble in the distance, only to shatter into view. The execution here is superb, with the trip-hop that has permeated Fink’s later records deployed to great effect. The programming wouldn’t be out of place on an early Amon Tobin record and as the lounge-gore-glitch seeps its way into the spine of the record it really feels like Fink have turned a corner.

Luckily, the doom and glitch continue on ‘Covering Your Tracks’. The succulent reverb that draped itself over Hard Believer’s ‘White Flag’ makes a welcome reappearance and the lyrics aptly take a political turn. “No one hears if no one listens / All these limits to liberty, put them in a box and bury it deep in the dark”.

The record ends in a slightly off kilter manner with ‘There’s Something About You’. After weaving such an eerie blanket of organic and synthetic sounds it seems bizarre to end the record with a relatively straightforward uplifting number. Perhaps the idea was to pull you up and out of the gloom, so as to ‘rise again’. For me, sadly, Resurgam would have worked better as a narrative if it had been left off and the dying taste had been an ominous one.

Closers aside, Resurgam is a convincing step away from the remnants of Fink’s original sound and a logical progression of the experimentation that elevated Hard Believer. The stadium melodies and ocean soundscapes are still here, but the sun has set. It’s dark now and something’s out there, waiting, to rise again. 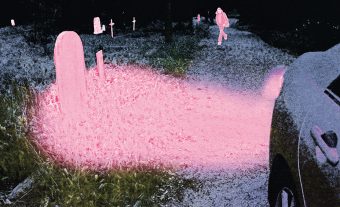 On his eleventh (eleventh!) album, Ariel Pink pays tribute to the troubled figure of Bobby Jameson with a mix of '80s synthwave and '60s psych-folk...
Read More