We’re big fans of Swiss six-piece Len Sander, having previously been charmed by the doomed romance of their Phantom Garden album and their gorgeously choreographed videos. So we’re delighted today to bring you the first taste of some fresh fruit from the Len Sander tree, in the form of a succulent new track called ‘(Is It) Because You Know I Love You’.

‘(Is It) Because You Know I Love You’ opens the group’s new Saltlick EP, and it’s a flavoursome entrée to say the least. Underpinned by a metallic beat and Massive Attack-style atmospherics, singer Blanka Inauen’s silky vocals engage in teasing shadow-play with rapid-fire staccato synths. It finds Len Sander in as melancholy a mood as before, but they now seem a little spikier, more tortured, and with an undercurrent of sexual tension. With tracks like this, it’s no surprise to learn they’ve been sharing stages with Róisín Murphy recently.

Blanka Inauen explains the genesis of ‘(Is It) Because You Know I Love You’ and the Saltlick EP:

“‘(Is It) Because You Know I Love You’ is about the oscillation between attraction and rejection in a dysfunctional relationship: I love you, when you don’t love me, I can’t love you when you love me. This was the first song we started working on for the EP and actually it was the last we finished. Many ideas were created for this songs, some of them made it to the final version. A lot of them didn’t make it, none of them were bad though. Ideas just kept coming, but eventually we had to decide in which direction we wanted to go with this piece. Alessandro, who is the producer of this song, once talked to me about making a 12-minute extended version. I think this could be very interesting.”

Sounds interesting to us too. Until that version surfaces, however, we’ll be more than content with Len Sander’s Saltlick EP, released this Friday on Mouthwatering Records. 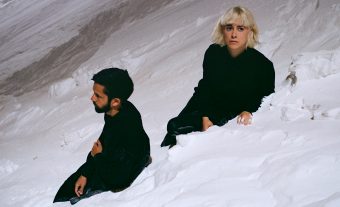