When you read that “anger, obsession, negligence, death, love, happiness, and hope” lie at the thematic heart of an album, you know you’re about to voluntarily journey into the abyss, albeit one with sufficient chinks of light to counter the sepulchral darkness.

Those seven words pretty much sum up Figure, the debut full length from Icelandic four-piece Vök. The album, three years in the waiting and released on the back of two highly successful EPs, was produced by Brett Cox (Jack Garratt). It’s a seamless segue of ten tracks – songs that flow in parallel lines through disparate yet familiar soundscapes.

Like its title, the album has several connotations and few boundaries, as it explores and juxtaposes myriad polar opposites like entrapment and independence, grimy reality and romantic vulnerability. At times the atmosphere is so intensely claustrophobic as to feel strangled and buried deeply under a mound of chaos.

Conversely, there are moments of perfect transcendence, dreamy interstellar loveliness that provide a welcome relief. Moments when, blinded by the dark and gasping for air, we are lifted out from the shadows back into the light.

Figure opens onto a dystopian landscape with ‘Breaking Bones’, a song that could have soundtracked Blade Runner or the #darkside of Star Wars. Something of a paradox in terms of atmosphere, it sees vocalist Margrét Rán’s breathy exasperation submerged in a deep sea of brooding electronica whilst at the same time appearing to float on a dreaminess redolent of Groove Armada’s ‘At the River’. Cutting into a micro battle scene replete with alien noise invasion and electro war dance, it closes with a flurry of hypnotic trance-reggae.

This combination of dark and light, harsh reality and ethereal dreaminess, sets the tone for an album. Although Figure shifts through several soundscapes, it never seems to fully extricate itself from a self-imposed twilight zone.

Light to the dark of ‘Breaking Bones’, ‘BTO’ is a mass of swirling melodies adorned with strobes of electronic iridescence. Electro-dream-pop muddled with random noises given a sense of calm by the cool gaze of Rán’s icy vocal. It opens up the album, allowing it to breathe more freely. However, while it is less tangible than the earthy opener, it also feels less ‘real’.

More echoey dreaminess can be found on title track ‘Figure’. There’s a delicious Eastern flavour to the instrumental stream and distorted harmonies that flow underneath, while a steady build of vocal progressions explode into full on distortion.

Vök’s sound touches on several genres without ever pigeon-holing itself into any one style. Trip-hop, R&B, dream-pop, electronica, alt-pop – they’re all there in various shapes and guises, all tailored and custom fit to exist within but not dominate the quartet’s idiosyncratic sound.

While the tracks ‘Don’t Let Me Go’ and ‘Show Me’ are all about R&B fundamentals, the more avant-garde, siren-filled ‘Crime’ is a grimy walk through an expertly captured nocturnal underworld rife with uncertainty.

Trip-hop ballad ‘Polar’ lulls you into a false sense of reverie from which you are lifted by a series of alarms and insistent percussive sequences. When they finally converge, they create the most dramatic crescendo in which Margrét Rán’s once wistful vocal reaches howling proportions before once again dropping back to a dreamy whisper. Virtuoso vocal volte face seems to be the Icelandic singer’s trademark as she seamlessly switches timbre and flips delivery from hushed ooo’s to plaintive wail throughout.

Figure is heavy on the dreamy side and there is no track more ‘otherworldly’ than ‘Floating’, another gauzy haze heavy on the reverb with a quirky skew on the vocal. A dark, forbidding atmosphere is conjured by some seriously intricate guitar playing, while a blend of ghostly harmonies gives the track a sense of eeriness.

There is a sense of distance and vulnerability which Vök have skilfully created through innovative arrangement. There is also a feeling of confusion and an air of mystery. In fact, there are several storylines running through this track but they are so vague as to keep the listener guessing.

In stark contrast to the dystopian opener, and following the sombre mournfulness of the rain-soaked ‘Lightning Storm’, the album ends on an up-tempo note with mid-80s dreamy electro-pop track ‘Hiding’, a song polished with a lush Latino sheen.

Laden with evocative echoes and contrasting shades, and abundant with space-age synths and intriguing guitars, Figure is a testament to Vök’s abstract sensibilities, Icelandic outlook and innovative song-crafting. With its ambitious soundtrack, Figure should see the Icelanders spread their wings far beyond European shores.

Vök is Margrét Rán (vox/guitar/keyboard), Andri Már (sax/synth), Ólafur Alexander (guitar/bass) and Einar Stef (drums/percussion). They have just embarked on a promotional European tour that will finish up mid-May in the UK, details here. 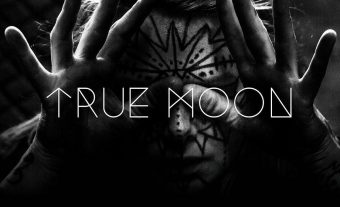 True Moon’s talent for dark-edged post-punk is abundantly clear on their debut album, but sometimes their references need a little reining in...
Read More