Sweden-based True Moon’s Karolina Engdahl and Tommy Tift define their band’s purpose as a reaction against the formulaic pop that threatens to suck the lifeblood right out of the contemporary Scandinavian music scene. To counter this, they themselves lurch to artfully embrace life’s full spectrum – sickly sweet bitterness, grandiose emotional turmoil, death and the wild.

The group would be a most welcome reply to a Bandcamp advert seeking “self-styled punk warriors to provide musical shelter for disaffected likeminded – flangers, reverb and eerie guitar sounds preferred”. A common criticism aimed at endeavours created against – rather than for – something, is that they lack a core, are bereft of a rock-solid mission statement.

First single ‘Voodoo’, however, promises exactly that. Studded with glimpses of Karen O chutzpah, it pulls you straight into a catchy verse full of swagger, seconds after the mood is set with a lingering Bauhaus-inspired chord, and still to be topped off with a well-executed Strokes-style guitar part. Anything seems possible if your identity can splinter into a demon, a sister, a warrior and a mother, at the drop of a D note.

‘Our own darkness’ and ‘True Moon’ do not quite match the original flashes of ‘Voodoo’. Sporting Interpol-inflected vocals, the tracks confidently but predictably navigate an overfamiliar post-punk guitar landscape.

By this point, it is obvious that, for their revolt, True Moon chose to look in the rear mirror for inspiration as they profusely celebrate the darkly exhilarating sounds of the late ’70s and early ’80s, which have reliably captured the imagination of a sub-section of every subsequent generation the globe over.

While each revival draws its slew of innovative bands adding to the mould of the genre – Interpol, A Place to Bury Strangers and Ought, to name a few – many more do not outstretch the shadows of their depressingly good forbears. True Moon are yet to convince me.

The album is a strong collection of very energetic, riffy singles that draw their flair from Engdahl’s surefooted vocals, Tift’s effect-laden, skilled guitar work – an accomplished blend of Bauhaus and John McGeoch guitar effects – and pulsing, restless drums throughout.

‘Sugar’, again, begins with a dash of the past, before it eventually morphs into present day True Moon and throws the potential of the band into stark relief. Great atmospheric mood, sweet yet dark, it also reveals Engdahl’s impressive vocal range. Influences subtly inflect the sounds without being overbearing.

‘Just like smoke’ continues in this vein, with slightly sharper edges and a great section at minute 2:14 that showcases Tift’s possibilities on the guitar and impressive mastery of his amp and effects pedals.

The lyrics on ‘Run Run Run’ border on pastiche – ‘When everything hurts, kill me first, If there is a heaven on earth, then what the hell is it worth’ – but they are swiftly redeemed by the same type of far-away guitars, sounding sullenly from the netherworlds, that also haunted Siouxsie and the Banshees’ ‘Halloween’.

‘Honey’ is a sweet relief from the laboured darkness of the preceding songs. Lyrics still a little contrarian but not trying so hard, this is a mellow pearl of a song that feels more delicate than the rest of the album, and this suits the band very well.

If True Moon were indeed writing the lacklustre pop songs they deride, you would not be reading this review. As a big fan of all the references named throughout this piece, I cannot help but like an album that uses them as a not so secret ingredient, and tastefully so. Yet, I think that sometimes less is more and that True Moon would leave a more solid impression if they reined in their influences and revealed more of themselves as the passionate and talented musicians they are. 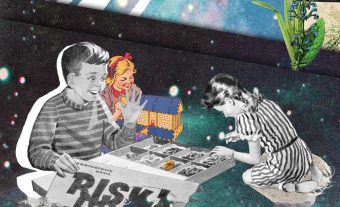