After being delayed by a particularly grim election night hangover and the depression that swiftly ensued, it’s time to pin a rosette to the best EPs sent to us last month…

I’ve been a big fan of Christian Löffler ever since his bewitching 2012 album A Forest. York, released on house label 20:20 Vision rather than his own Ki Records (although it’d be equally at home on a minimal label like Kompakt), exhibits the same qualities that won me over the first time, with his crisp production creating warm atmospheres and soft, misty-eyed emotionalism. I have no idea if the title track is actually about the county town of Yorkshire, but it’s a pretty gorgeous tribute if it is, while ‘Nordkap’ also employs a touch as light as air. Highly cultivated stuff.

A collaboration between Welsh ‘Super Producer’ Llion Robertson and classically-trained composer Seb Goldfinch, Cotton Wolf follow this week’s Monitors trend by incorporating all sorts of exotic field recordings into their palatable electronic blend. The city of Barcelona was apparently the biggest influence of all the cities sonically represented on the EP, and like that city Moxa is full of well-crafted structures that manage to feel curiously organic.

Also like that city, it likes to party. While the title track and the Peru-inspired ‘Siula Grande’ both have their woozy moments, neither stray too far from an uplifting harmony or solid beat. Best of all is the pulsating ‘Rotoscope’, which spins upwards with all the colourful craziness of that mental Thai rocket that was doing the rounds on YouTube a while back. Perhaps that’s where this globe-trotting twosome will be headed next…

For a while all I really knew about Jack Garratt was that he had one of the most hipster beards I’d ever seen (and I work in Shoreditch). Lucky, his Synesthesiac EP proves there’s more to him than prodigious facial follicles. From the dusty funk and sample clashes of ‘Synesthesia Pt. 1’ to the wibbly strut of ‘Lonesome Valley”s electro-blues, Garratt’s inventive production and mercurial song structures mean even the most wandering mind is soon snagged back into the music.

Best of all is last year’s ‘The Love You’re Given’, the soaring hook of which is still as ear-catching as ever, with one of the bassiest drops you’ve ever treated your subwoofer to. On this evidence, Garratt could end up being the next big thing. Or at the very least, the James Blake you don’t accidentally fall asleep to.

Despite suffering for some decades under reactionary regimes who frown on certain female freedoms, Iran has produced some of the Middle East’s most prominent female artists, from the graphic novelist Marjane Satrapi to film director Samira Makhmalbaf. Kali is the latest in this diasporic lineage, but her latest EP showcases a style that has few precedents.

She calls it ‘Bolly-Tech’, and while on one hand it sounds exactly like you’d expect that to sound, it also incorporates a bunch of other styles too, with the title track drawing in slightly unsettling whispered vocals, unconventional time signatures and a twisted pop sensibility. The more upbeat ‘Shanti Love’ is equally catchy and gloriously silly, while the EP also comes with a raft of remixes, of which Chong X’s bleepy version is the most interesting. As part of a wider global electronic dance culture which no longer looks to the West for inspiration, Kali fits in just fine.

Kissey’s Initiation EP earned in a place in our 2014 end of year list, and we’re pleased to report that The Awakening sees her continuing on that sharp upward trajectory. It starts off in familiar territory, with Kissey sounding like a more soulful Planningtorock on the airily uplifting ‘I Don’t Need Anything’ before shifting into some sort of evil android overlord on the suffocating ‘Distortion’.

It’s that darker mood which prevails for the rest of the record, with a distinct S&M vibe on the filthy-sounding ‘Animal’. The dreamily minimal thud of ‘Transform’ sees out an EP that confirms Kissey as an artist more people should be waking up to soon…

Reviewing a Brighton act called Sea Bed while the rest of the music industry is currently downing pints by the seaside at The Great Escape seems like a cruel joke, but luckily this duo’s classy electro-pop is capable of keeping me from getting too gloomy. There’s a nice old-school house vibe to tracks like ‘Dark Embrace’ and ‘Caves’, while the title track is blessed with a chorus that politely beckons your hands into the air and keeps them there. The fidgety ‘Haunted’ shows a somewhat more melancholy side, although makes sure to bring the beat into the doldrums too, and helps convince you that Sea Bed are more than a one-trick pony. Ahhh, that’s better. Why go to Brighton, when Brighton can come to you?

A first for EP Address: a soundtrack to a book. This is the third musical release from outdoorsy literary types Caught By The River, and it forms an accompaniment to At Hawthorn Time, the second novel by Melissa Harrison. The Independent called the book “as much a hymn to the ancient life-force of nature as it is a reminder of the underlying fragility of our busy modern world”, and in that respect it has a more than worthy musical companion in the two tracks that form Rivertones #3.

The first, ‘The Boundway’, is a gently brooding, cinematic piece that’s simply made for staring pensively through rain-streaked windows (or accompanying a country walk, as suggested by the accompanying text). The track’s even more ambient partner, ‘Babb Hill’, buzzes quietly with faint distortion and a subtle undertone of foreboding; its literary passage invokes a feeling of isolation and involves a radio, which makes perfect sense. I can’t find any information about who wrote actually this deceptively peaceful music, but they’ve done a fine job – book or no book.

Young Knives were one of those bands I quite liked without ever buying any of their records. You know, the sort of band you maintain respect for without ever wanting to go and see them, unless you’re at a festival and there’s nothing much else on at the time. So no one’s more surprised than me at just how bloody great Something Awful is. Apparently, like the record reviewed above, it also came with some attached print media – namely a fanzine of the same name featuring the likes of Kiran Leonard – but don’t worry if you didn’t grab a copy on Record Store Day as the music more than stands up on its own.

The creepy mutant-rock of the title track, which totally passed me by when it was first released a year ago, opens proceedings with a bang (“I can feel that I’m changing… into something awful”), before twisting into a bizarre instrumental that feels like it could be incidental music from Dexter’s Lab. It’s followed by ‘Something Sweet’ which is, ironically, even nastier, all twisted snarls of distortion and the occasional Scott Walker-esque melodic descent (with a little piano boogie being set oddly against it in the background).

‘Something Tragic’ goes for ‘Frankie Teardrop’ levels of anxiety-inducement, while ‘Something Cheap’ employs that sort of jagged indie sound frequently described as ‘angular’ by Artrocker. It’s probably the least diverting track on offer, but it doesn’t change the impression that Something Awful is awful good.

Single-Minded - Jenny Hval confirms 'That Battle Is Over'... 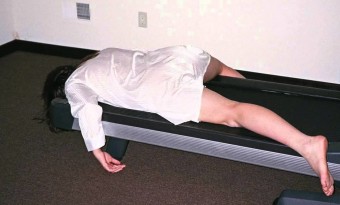 "Socialism is over," sings Norway's Jenny Hval on her latest single, and it's hard not to agree in a Single-Minded dominated by post-electoral depression...
Read More