As I take up my customary spot under the arches in London’s Heaven nightclub, True Widow are midway through their support set for Chelsea Wolfe. Two parts shoegaze to one part fuzzed-out stoner-rock, the Texan trio combine a soothing and ethereal indie foundation with explosions of darker sludge. In a similar vein to Georgia’s heavier Kylesa they incorporate two exceptional vocalists, with bass player Nicole Estile and guitarist Dan Philips sharing verbal duties. Both vocals have a similar wistful quality but differ enough to bring their own individual personalities to the songs.

The pummelling melancholic fuzz of newer tracks ‘Theurgist’ and ‘O.O.T.P.V’ sit comfortably alongside the trudging arpeggione colours of debut standout ‘Bleeder’. Tonight’s set demonstrates a heavier and more well-developed range of songs, and with the band amid touring for fourth long-player Avvolgere, missing half their set was a mistake.

Having recently been blown-away by labelmates Russian Circles’ use of the girthy sound-system on offer here, I am excited to see what Chelsea Wolfe’s industrial flecked goth-folk can do with such a weighty low-end platform. As is always the case with Sargent House’s genre-hopping stable, the crowd here is as diverse as ever, and as the opening synth stabs to ‘Feral Love’ ring out, a huge cheer swells. Wolfe’s use of subtle sound textures is detailed in all its hellish beauty tonight, and as the aching bassline stoops, what sound like distorted cracks of lighting lash across the audio squall.

‘Carrion Flowers’ follows and Wolfe makes full use of the glut of sub-frequencies accessible on such a large PA. With Nine Inch Nails such a hit and miss prospect these days, it’s great to see Chelsea Wolfe and her band carrying the torch for industrial emotive music. Wolfe’s banshee vocal flutter sits perfectly in the mix with never an off-note and tonight’s set has ignited with aplomb.

Sadly, as is often the case with bands that frequent a certain tempo-range, the set gets a little bogged down over the next few songs and some momentum is lost. ‘Dragged Out’ and ‘We Hit a Wall’ along with new song ‘The Culling’ are executed well but for me could have done with being separated. Credit is due however, as Wolfe and her band overcome technical difficulties with an ease that comes from being seven years into a touring career.

For a musician whose discography contains so many moments of understated beauty, it must be comforting to have an excess of subtle gems that can always be called upon to ignite a faltering set. ‘Simple Death’ does just this. As longing synths grow, Wolfe sings ‘White light, a desert storm, midnight’ and the evening’s first stand-out moment is deservedly met with a huge roar from the crowd.

Back now on solid ground, Wolfe continues with the whispering behemoth that is ‘After The Fall’. 2016’s lead single ‘Iron Moon’ again applies the duck and volley approach and delivers the evening’s most epic six minutes. As the band weave folk, post-rock and industrial into our ears, the crowd is engulfed in a perfect blanket of doom.

This evening Chelsea Wolfe and her band execute her seven-year wealth of songs with wraithlike ease. Throughout the set Chelsea’s name looms large above the band in an ever-changing apparition of lights. On tonight’s showing it fully deserves to be there. 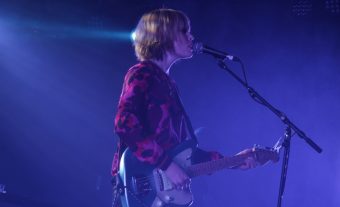 Haley Bonar charms an appreciative audience at Tufnell Park's Dome, although it's possible the crowd didn't charm her quite so much...
Read More