At first I must admit I find it odd that I’m being questioned about which gig I’m supposed to be attending tonight, however I soon realise what has happened. I’m at The Dome in Tufnell Park, a venue that’s also twinned with the Boston Music Rooms, which are below it. BMR put on a lot of hardcore, punk and metal shows. I am wearing a t-shirt of a hardcore band (the excellent Landscapes, go listen if you haven’t). What, at first, I think is the bouncer about to try and kick off with me, has in fact turned out to be a very kind gesture on his part to make sure I’m not about to mosh all over some poor unlucky souls upstairs. Luckily for them, we’re all here for the same reason, to watch Canadian-American (born in Canada, raised in America according to Wikipedia) singer-songwriter Haley Bonar (har har yes you’re right har yes it DOES sound just like that doesn’t it yes very good har grow up mate).

Until earlier this week I’d not actually heard of Haley Bonar before, but as soon as the gig was confirmed I had a search for her on Spotify and, I’m going to lie to you dear readers, I was pleasantly surprised. Her songs smack of hot, dustbowl summer nights in southern America, teenagers wandering the streets, drinking and looking for trouble. Despite all the riffs, there are some genuinely lovely folk songs in her back catalogue, including some that feature Justin Vernon of electro folk sweethearts Bon Iver. She’s got a wide range of material to choose from and I’m curious to see what she’s going to bring with her tonight.

I enter The Dome to find a nice sized crowd already gathered to watch supporting act Michael Nau. I grab a drink (god I love the prices at the dome – two drinks for under a tenner! In central London!) and weave my way through the heavily mixed audience. There’s people of all ages and backgrounds here, and it’s pretty nice to see.

Up on stage, Nau is introducing his next song. He seems pretty shy, only uttering the odd “thanks, this next one’s etc etc” without much audience eye-contact, but hey, he lets the music speak for itself. There’s a certain dishevelled charm to him and I can’t help but be reminded of Ethan Suplee’s character Randy in the TV show My Name Is Earl.

He begins his next song and it elicits the feeling of being on a beach on a warm summer’s day, a cool breeze rolling over the waves and dancing little moves out on your skin (yes there’s quite a lot of summer analogies in this review but you know what that’s just how they all sound OK and I happen to like summer quite a lot and what’s wrong with that exactly why don’t you move to Alaska if you like the cold so much jerk). I’m easily reminded of Mac DeMarco; that cool, lo-fi fuzzy chilled guitar sound he’s so well known for, but this isn’t a bad thing. While Mac certainly nails the genre, he didn’t invent it, and Michael Nau is a welcome addition. 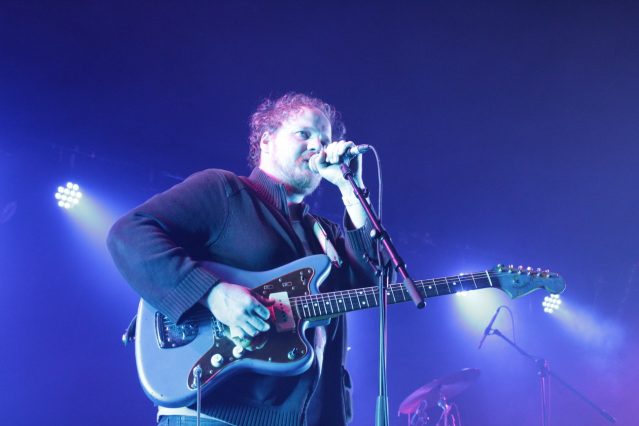 Annoyingly throughout every pause in his set (tune up, song change, quite moment etc) there is a very audible din of audience chatter. At first I don’t really notice it, but as soon as I do I can’t stop. I’ve said it many-a-time before and I’ll say it again, don’t spend money on going to a gig and then just talk the entire way through it. Sure, this is only the support act and you might only be here for the main event, but that’s not an excuse to be rude. Just shut up and listen because nobody else is here to listen to your moronic braying. Berk. But I digress. Nau seems happy enough and finishes his final song with a good flourish.

By now it’s pretty packed out in here, but I’m never quite sure on the dimensions of The Dome, it seems to slightly change shape and size every time I’m here. From where I’m standing, if I turn around it looks like the crowd goes on for miles, stand at the bar however and you can see the gaps. It’s not a bad atmosphere, just merely something I’ve noticed. So, there. The house is throwing out some odd music, namely ‘Re: Stacks’ by Bon Iver. I get it because, as I previously mentioned, Bonar has some songs featuring Justin Vernon. HOWEVER, that doesn’t mean that I want to hear their saddest, most delicate song while I’m waiting for a band to start. I’m here to have a good time, not to curl into the foetal position on the floor and start sobbing (don’t you even dare try to tell me you’ve never felt the same when listening to it). Luckily, the general hubbub of the audience drowns most of it out, so no crying for me tonight – get in! The song fades and the very familiar guitar plucks of Fleetwood Mac’s ‘The Chain’ ring out into the venue as the lights dim and Haley Bonar and her band take to the stage.

The lights switch to a cool blue and swirl around the band as Bonar steps up to the mic and the opening chords of a slowed down ‘Jealous Girls’ trickle forth from the speakers. It’s a different version to what I’ve heard, but we can all tell it’s leading up to something. My first impression is that Bonar sounds like an American version of the British band Daughter, the echoes of her guitar strumming creating a gentle wall of noise as she croons into the microphone, her voice scratchy but vulnerable. As the song builds, little whoops of encouragement emit from the audience, before the band do a complete 180 and burst into a head-bopping rendition of ‘Your Mum Is Right’. It’s a surprising shakeup and it pays off, the audience moving along to the upbeat riffs and pounding drums.

Bonar blasts through her set like a bat out of hell, each song segueing nicely into the next. There’s not a whole lot of chatting to the audience, but much like Nau before her there doesn’t need to be. There are no gentle songs here, this is a straight up rock ‘n roll setlist, and the audience lap it up. 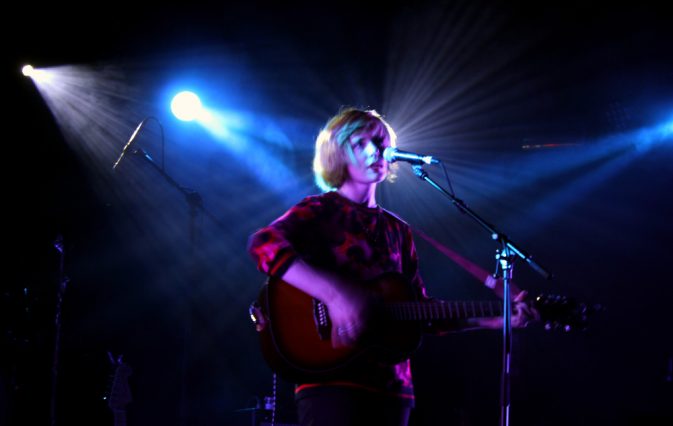 There’s something almost pixie-like about Bonar while she plays, but her command of the stage is unprecedented. There’s hardly any chatter from the audience anymore. At one point, someone screams “I LOVE YOU HALEY” and she offers a shy little smile. She flashes the same smile at her band members as well, first furtive but towards the end of her set it’s full on grins all round. However, at one point, around midway through her set, she makes an odd remark to the audience after finishing a song:

“What day is it? Thursday? You all seem like a Thursday night crowd…”

Like yeah, it is a Thursday what do you want, huge-lad-sing-a-long and mosh pits? Everyone here is clearly here for you, and from where I’m standing you’re getting a righteous amount of applause. I don’t really know, it’s strange moment and no one really knows how to react. I’m not sure if it was said in jest, but due to the fact there hasn’t been much chat to the audience previously it’s a strange comment to make. The place is pretty full so I’m not sure what the problem is (unless, of course I’ve gotten it completely wrong and am absolutely tone-deaf to jokes). Her guitarist gives a little eye roll but the other members of the band seem as nonplussed as the rest of the us.

Regardless, the moment is quickly swept over as the show continues. Whatever issues Bonar may have had evidently have now disappeared as she’s completely into the music. She finishes on a brilliant ‘Kismet Kill’ before bowing to the audience and leaving the stage. But not for long. She steps back out and grabs her acoustic guitar and serenades us with a lovely version of ‘Eat For Free’ (the one JV features on! He is, unfortunately, not around it seems).

It’s a touching moment after having been blasted with a wonderful dose of indie rock. The crowd goes wild with whoops and cheers and there’s definitely a little singalong going. When she finishes, she’s joined on stage again by the rest of the band as she makes an announcement that this will be her guitarist’s (I didn’t catch his name so apologies, if anyone knows it please let me know) last show with them. To celebrate (or, rather, to mourn) this, they launch into a cover of ‘Whole Wide World’ by Wreckless Eric, which is a perfect end to the night.

The band finish to huge applause and give many a bow before leaving the stage. There’s smiles all round from everyone I lay eyes on, and I’m glad I was able to share this moment with so many avid fans. I leave knowing I’m going to download and listen to as much Haley Bonar as I possibly can. Bring on the summer sun.

Shobaleader One and Sunn O))) shine at Convergence 2017

The fourth edition of Convergence brought forth stellar performances from Sunn O))), Shobaleader One, Daniel Lanois, Rival Consoles and many more...
Read More