Speculation about the origins of Dutch producer Pascal Pinkert’s droll-sounding alias Dollkraut is hard to resist. A homage to his beloved Krautrock influences? No. A doll made of weed? No. A poisonous plant? Erm. Because he liked it? Most likely. The down-to-earth Dutchman with floppy curls also likes the past, prefers analogue to digital, has a penchant for comics, ‘70s B-movies and yes, you guessed it, old vinyl.

Dollkraut’s first release, Shimanski’s Black Lullabies, left the impression of a nostalgic musician, concerned as much with sound’s aesthetic as with its sonic impact, superbly talented and a tad eccentric. His second full-length album, Holy Ghost People, does not change this perception one bit, though it adds intricate musical layers aplenty to the producer’s erudite library of musical and cinematic tastes.

Poking for references in the self-confessed patchworker’s oeuvre is as much a thankless task as it is a revelation and a pleasure. When first listening to Holy Ghost People, a little frustration added itself to the mix when familiar sounds revealed themselves as tricky to track down and never quite showed up where I expected them.

That is Dollkraut’s sweet spot. The tracks impress by how closely they resemble so and so, without exactly emulating anything: some post-punk pastiche, an echo of electroclash, the second half of the album swallowed up by a sexy ‘60s Wild West aura, did I mention Portishead? Sounds like a cup of tea I would happily dip my biscuit in.

The melancholic slant, perceptible on earlier Dollkraut tracks ‘Rollercoaster’ and ‘Fire’, firmly takes hold on Holy Ghost People. I always considered Ladytron’s 604 the epitome of deadpan melancholy; Dollkraut captures a similar vibe but strips it of its stand-offish cool. The result is a much more sombre and mysterious affair, like visiting a graveyard at the witching hour to find it drowned in a warm pool of flickering candle lights.

‘Bonnie Said’ and ‘Valium’ both use an even tempo, simple drums and minimalist bass waves. Dollkraut’s characteristic, drawn-out, spacey synth lines tear them away from mediocrity. The claustrophobic, inward-looking ‘Valium’ is as bit as addictive as the more fun-loving, ‘70s inspired ‘Rollercoaster’, and exactly as you would imagine I-F’s ‘Space Invaders Are Smoking Grass’ to sound after dosing it up with the sleep-inducing substance.

The trip-hop groove on ‘Oblivian’ could have been churned out by artificial intelligence after accidentally being fed someone’s dust-gathering Portishead collection.

‘Holy Ghost People’ feels like being trapped in a Newton’s cradle. As the song seems to take off, the rhythm flows back into itself until you dangle between disparate groove patterns. Requires more focused listening, but when a melody does squeeze its way out from the circular structure, the dedication proves worthwhile.

A prominent, driven beat, reminiscent of Shit Robot’s ‘OB-8 (Winter Mix)’, arrests me on ‘Red Girl’. Dollkraut uses a grittier version of the pulsating, staccato motions employed by Shit Robot. Like Thom Yorke in the magical woods of ‘There There’, ‘Red Girl’ flings itself forward, hurried on by drum beats that work their arses off to keep up with the siren waves of analogue synth – a welcome guest in any indie disco circa 2008, snuck in between Metronomy’s ‘Holiday’ and Klaxons’ ‘Atlantis to Interzone’.

Time has come to leave the sticky dance basement behind and join that big, old world out there. The slow, dreamy ’Beggarman’ could be the score to John Wayne as he sets off towards the sunset in a spaceship, or soothe an unrequited lover who is off to the future, but looks back with a sad smile. Or anything you can muster! Cleverly distilled, ‘Beggarman’ hits all the right spots and makes you bubble with nostalgic glee.

Two deeply enjoyable, psychedelic lullabies fade out the album, both helplessly infused with the evocative sounds of The Shadows and The Doors on ‘Riders On the Storm’.

Where the charming Shimanski’s Black Lullabies was a smorgasbord of influences, derived sounds, a genuinely effective but ultimately safe exercise in nostalgic reverence, I perceived in Holy Ghost People an earnest attempt to forge a more intricate and intimate record. If that was the plan, which it probably was not – Pinkert seems the nonchalant type – then it has come to fruition in the first half of the album. The slower songs, despite their accomplished suggestiveness feel a little too derived for unreserved praise.

I expect Dollkraut to gather a larger following in the UK with this album. Who knows, he might even regret his alias choice when an eager interviewer asks the near-irresistible question for the nth time. 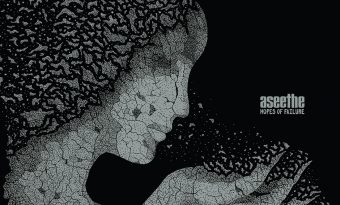 Hopes Of Failure's four bruising tracks scrape through the debris of doom and drone like a digger in a scrapyard of hope.
Read More