From MLiR to Massive Attack, our latest latest video compilation demonstrates the sheer range of tools available to directors these days, running from interactive innovations to people re-appropriating seemingly redundant technology. It also features God, a Godzilla-sized cello, a bunch of murderous bowling pins and a woman making out with a pig.

It might seem a strange way to kick off this month’s column, but I’d actually recommend not clicking play on the above video.

Instead, follow this link to experience the full, interactive version of Cassius’ ‘The Missing’, which allows you to play God by substituting the kissing couples at your whim. Which would be a pretty weird thing for God to do admittedly, but Christ knows He must be bored enough some 6000 years after creating the bloody universe…

Speaking of God, he actually turns up in this one. Director Najeeb Tarazi has created a 16-bit, SNES-style version of Milton’s epic poem Paradise Lost, which seems like the result of the weirdest creative urge since that guy wrote that Seinfeld 9/11 screenplay, until you realise Paradise Lost is the name of Delta Heavy’s recent album.

Even the most biblically ignorant viewer probably won’t consider it a spoiler to reveal that Jesus makes for quite the end-of-level boss.

I actually went bowling last night. Despite a few lane-shaming scores, a fine time was had by all – probably because we weren’t all brutally murdered by giant bowling pins, as happens in the video for FEWS’s ’10 Things’. The best b-movie that never was, it even has a happy ending (for the pins).

I’m not the biggest fan of noted rave-robber Jamie xx, but credit where it’s due for an eye-popping video. Apparently no CGI was used for this, which I’d find hard to believe if it wasn’t directed by the esteemed Romain Gavras, the man behind this MIA classic among others. (Actually I still find it pretty hard to believe, but what does it matter with results like this?)

I’m always impressed when a music video not only manages to imaginatively tackle a song’s subject matter but softens my opinion of the song’s writer/s too. Kudos to director Pedro Martin-Calero then, whose work on ‘Warts’ has made me realise just how charming Hinds’ song is. Or maybe I just feel sorry for them after watching the band get bumped off during the video’s denouement. Either way, ‘Warts’ is as beautifully shot as the John Vermont video above, although with a much more primary coloured approach.

The masterfully executed ‘Fantasy’ gives us a glimpse of the jilted Kari Faux’s flat, which becomes increasingly neglected as she struggles to come to terms with her heartbreak. Until, that is, a rampaging cello in the style of Ghostbusters’ Marshmallow Man (honestly) appears on the scene…

Massive Attack & Ghostpoet – Come Near Me

Although it contains no violence, gore or murderous bowling pins, this is probably one of the most upsetting videos we’ve featured on MPEGs Eleven. An understated yet powerful take on abusive relationships, the stunning simplicity of ‘Come Near Me’ remains transfixing until the end, which, importantly, sees the tormentor’s aggression ultimately bringing about his own downfall as well as his victim’s. A nice little nod to Massive Attack’s iconic ‘Unfinished Sympathy’ video too.

This is the first MPEGs Eleven selection to have actually been premiered on The Monitors; it’s just too good not to post twice. You can read more about the video’s creation on an old Commodore 64, and director Raquel Meyers’ brilliantly baffling explanation of the process, here.

MLiR might stand for ‘Modern Life is Rubbish’, but modernity has its perks; one of which is the ability to watch this video on repeat. The duo’s Einar Christoffersson created this addictive montage of people for ‘People’, which perfectly suits the summery Swedish sounds of the music, made with his MLiR mate Marco Gegenheimer.

Another awesome montage, although this one is focused on a nautical theme. The glitchy, sailor-packed footage not only suits Opal Blue’s name, but also goes surprisingly well with the slick two-step of their track ‘Taking My Love Away’, thanks largely to some energetic editing. It’s also a fine spot to moor up this month’s edition of MPEGs Eleven – see you next time, me hearties… 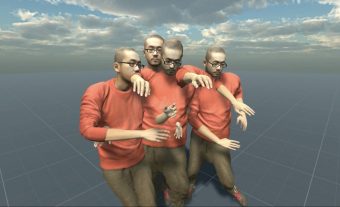