The term ‘raising awareness’ is one of many that risks having its meaning dulled by over-repetition. Or perhaps simply ignored because of its meaning. After all, many of us spend our time actively trying to resist awareness of shitty things like obscure terminal illnesses and cruel forms of exploitation. Being ‘aware’ doesn’t seem to offer a cure for these problems, just threatens to add another burdensome bit of condensed misery to the overflowing knapsack of things to be worried, depressed or paranoid about. To paraphrase Keats, “to be aware is to be full of sorrow / And leaden-eyed despairs…”

This is wrongheaded of course, and especially in the awareness-raising case we’re discussing today. CheckEmLads is a UK charity that fights to not only raise awareness of testicular cancer but also offers a community of survivors able to advise and offer comfort to those unfortunate enough to suffer from the condition. It’s also the beneficiary of all funds raised by a new compilation from DIY promoter Wrongpop, which is available for just £5 via Bandcamp and features a stonking assortment of some of our favourite bands, from Part Chimp and Songhoy Blues to Teeth of the Sea and Future of the Left. In fact, before you read any further, head over there and buy a copy. Go on. Do it now.

The reason raising awareness of testicular cancer is particularly important is because it’s 98% curable if treated early, and men aged between 20 and 40 are most at risk. The more aware of it young men are, the more likely they are to check for unusual lumps in the old scrotal sack. Equally, the more demystified it becomes, the more likely those young men are to go to their doctor should they find anything, rather than applying the usual 20-to-40-year-old-male remedy of ignoring it and hoping it goes away.

Wrongpop founder Stephen Sinnott-Clarke is better placed than most to say just how important early detection is. As he explains honestly and movingly in this must-read interview in The Independent, discovering his cancer a little earlier might’ve saved him from the gruelling courses of chemotherapy that almost killed him. Discovering it a little bit later, on the other hand… well, you don’t need me to spell it out.

As someone who suffered my own testicular cancer scare as a teenager, I can testify to the importance of awareness campaigns and their effectiveness when it comes to encouraging a healthy bit of bollock-fondling. In my case it was a plot-line on Grange Hill of all things that alerted me to the danger, but 26 tracks from a bunch of barnstorming bands would’ve been an even more effective eye-opener had it been available at the time. (In fact, raising awareness of bands like Lay Llamas, Henry Blacker, The Oscillation, Hey Colossus, Grey Hairs, The Wharves and Cowtown is a worthy endeavour in itself.)

As Sinnott-Clarke poetically puts it: “Dropping your pants and letting a stranger touch your bollocks could literally save your life. If you leave it and it grows and spreads like it did with me, you might prevent yourself from going through a similar ordeal where 1 week of chemo turns into 14 months.” If that’s not an incentive to start raising awareness via the healing power of maximum rock and roll, I don’t know what is.

If you ignored the earlier link to buy Wrongpop’s CheckEmLads album then here it is again. If you already clicked it, fuck it, click it again and buy another copy. And don’t forget to touch your balls*.

*Or those of a loved one. 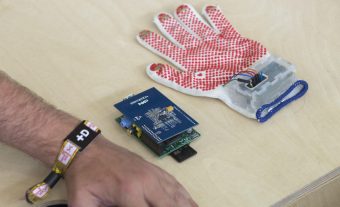 From Brian Eno to the Eye of Horus, the tech side of this year's Sonar seeks to provide attendees with more than just beats, sunburn and hangovers...
Read More