Our monthly EP column marches on with our round-up of the best EPs released in, well, March…

Many people may have shuddered when the world went gaga for ‘Gangnam Style’ a few years back, but personally I don’t think people come up with enough dance crazes these days. Disappointingly, a watch of the video for Parisian pair Charlotte & Magon’s ‘Egg Dance’ reveals they haven’t come up with an actual egg dance, or any type of dance beyond a sort of haphazard twirling, which is a shame. Then again, an actual egg dance would probably involved rhythmically smashing your head open and pouring the contents into a frying pan, so perhaps that’s for the best.

The good news is that a B-52 of a chorus means ‘Egg Dance’ will still get you going, and if you can keep from smashing your head open then it’s likely to remain lodged in there permanently. The rest of the EP is decent as well; ‘The Maze’ could slide in amidst the slower numbers on the second side of Remain In Light without being noticed, while ‘Cognative Dissonance’ occupies similar jerk-funk territory before elevating into disco. ‘Flower Fighter’ rounds things off smoothly with shades of St Vincent to the clipped vocals and the EP’s most serious groove, although in common with the other tracks it perhaps goes on slightly too long. Nonetheless, Charlotte & Magon have proved, if nothing else, that they deserve their own egg dance. Choreographers, get in touch.

Do we ever need to hear the chords of Erik Satie’s Gymnopédies anywhere other than an actual performance of Erik Satie’s Gymnopédies? I suspect not, but Indiana-based composer City Water clearly disagrees. ‘To Sleep’, the opening track on his 1 EP is underpinned by those overused chords, and while this familiarity can’t help but initially breed contempt, the reverb-drenched vocals manage to provide an otherworldly sparkle.

The rest of the EP produces similarly ambiguous reactions, as solid but unspectacular ambient drifts are enhanced by some excellent production. At times the gently repetitive piano phrasing recalls Norwegian instrumental types Deaf Center, albeit with a little less drama, at least until the plaintive baying of ‘The Scream’ begins; even if it’s not nearly as violent as its title suggests. Finally, the subtlest of grinding crescendos on ‘Firmament’, a track which recalls ‘The Power of Love’ by Frankie Goes To Hollywood of all things, cements the fact that City Water has the production chops to create the perception of boundless depth even with very little material. Impressive.

One constant challenge here at The Monitors is working out how to shoehorn last year’s amazing Tayi Bebba album by Clap! Clap! into every single review. That’s much easier than normal in this case; DJ Khalab guested on the pulsating ‘Sahkii’s Elevation’ on that very album, and Clap! Clap! returns the favour here on ‘Tiende!’, the second track on Khalab’s Eunoto EP. Surprisingly their Khalaboration (sorry) is probably the weakest of the record’s five tracks, with a little too much cutesy synth wiggling and not enough bass, but that disappointment is more than made up for across the rest of the record.

Eunoto takes flight with the fluttering ‘Substance’, a hovering hummingbird of a track that manages to come across as almost weightless despite an abundance of energetic activity. ‘Amagqoboka’ is a little heavier, bolstered with the occasional blast of elephantine synth trumpeting, but remains measured and cautious, stalking the plains rather than rampaging through the bush. ‘Medal Of Freedom’ and ‘Malala’ follow the tried and tested whack-an-African-field-recording-over-some-tasty-beats formula with similar success, but perhaps a little too stringently to emerge out of Tayi Bebba‘s shadow. Without that record’s bassy roar Eunoto might just struggle to make itself heard, but there’s plenty here to please anyone listening in.

The name and EP title might lead you to anticipate some sort of flesh-tearing Black Metal growlathon, but this is actually the sweetest, gentlest EP of the month. Which actually makes a lot more sense when you realise that a ‘Gengahr’ is actually a type of Pokemon. While the subject matter of the ridiculously catchy lead track might not be overly chipper (“I gotta witch that cries all the time,” runs the chorus), the musical mood is light as a feather throughout both the track and the EP as a whole.

‘Haunter’ puts some prime Real Estate up for sale with added indie-pop keyboard action, although it’s followed by the previously released single ‘Powder’, which is more functional than flamboyant. The best is left till last though with that track’s former b-side ‘Bathed In Light’, a breezy, melodic track that takes what Teleman have been trying to do over the last year and perfects it. This sort of music so often seems irritating or superfluous, but Gengahr have managed to make it palatable. Clearly there’s some sort of witchcraft going on…

Kwannon’s Honey Moon / Dizzy Spell was one of our 20 favourite EPs of 2014, and now he returns with another free release under a new name. Admittedly not the most Google-friendly of names, seeing as it tends to bring up either the famed luvvie drunkard or the esteemed bluesman Mississippi John Hurt, but happily the music is as good as ever.

Partially because some of it is the same music; both ‘Honey Moon’ and ‘Strawberry Daiquiri’ make another appearance after also featuring on his last release. The former is as blissful as ever, although opening track ‘First Flower’ matches it, adding an extra layer of electronic juddering to create the impression of a circuit board covered in fresh moss. The rough edges to John Hurt’s otherwise tender music see ‘Ignorance Is Bliss’ channelling the same faded heartbreak as early Dirty Beaches, while ‘Natural High’ shares similarities with Suicide’s ‘Cheree’. While the EP plateaus after the charmingly rickety ‘Ferris Wheel’, and the occasionally wavering vocals may put off some listeners, SLOWERLOVE proves that Kwannon’s musical quality is undeniable no matter what name it’s released under.

At seven tracks, John Hurt’s SLOWERLOVE stretches this column’s definition of what constitutes an EP. New York producer Kronodigger’s Subliminal Design only has four tracks, but the fact they’re all around ten minutes long means you can basically consider it an album too. In fact, there are enough ideas firing out of every track that you could form an individual EP out of each one.

Take opener ‘LFA’, which begins with some gorgeous kaleidoscopic chimes before traversing through Autechre-esque robotic carnage, dreamy aural backrubs, shattered fragments of dubstep, and woozy Board Of Canada workouts. ‘Mute’ maintains a grittier texture, coming across like the remnants of your memory after a rave in some grimy basement club underneath some railway arches, while ‘Sibyl’ periodically snaps at you from the depths of an arrhythmic cavern before rolling on its back to smatterings of alien ambience. While your stamina may have snapped by the time you reach the brutally busy ‘Chamaeleon’, you can’t deny Kronodigger’s roving eye when it comes to sound design, even when it’s less than subliminal.

This effort from Swiss producer Little People is so slinky it doesn’t so much start playing as sashay in draped in Versace. And while the title of opening track ‘Enola’ may be free-associated with the ebola virus, the plane that dropped the first atomic bomb, or the word ‘alone’ backwards, the music conjures no negative thoughts at all, being a summery drift through immaculately styled beats and breathy vocal samples. Nice.

The title track adds some delicious sweeps and a finger-snapping pulse into the equation, before ‘eightyOne’ fiddles with the formula a little. Focused around some almost Reichian percussive repetition, it builds and twists before dropping into a perfectly judged dose of bass. The whole shebang is than wrapped in a swirling synth bow before being served on a silver platter. If this music an item of clothing, it’d be frankly too expensive for you to afford. Luckily it’s music, and can be downloaded from Little People’s Bandcamp for free. Fill your boots.

It’s rare that the opening line to a press release makes you want to do anything other than ignore the rest of it, but that’s one hell of an opening line. And happily it comes with a decent record attached too. You may know the Eccentronic Research Council from any number of skewed releases over the last couple of years, not least the track that instantly became my favourite festive song of all time, ‘Black ChristMass’; a Scroogetastic bile-a-thon featuring regular collaborator Maxine Peake. The Moonlandingz EP sees them join forces with Fat White Family miscreants Lias Saoudi & Saul Adamczewski, who play the role of The Moonlandingz, a fictional band who suffer the affections of an obsessive fan on forthcoming album Johnny Rocket, Narcissist And Music Machine… I’m Your Biggest Fan. Don’t worry if that all sounds a bit wearyingly conceptual though; the important thing is the music.

We’ve already enjoyed the sleazy sound of lead single ‘Sweet Saturn Mine’, and the good news is the rest of the EP doesn’t disappoint. ‘Lay Yer Head Down In The Road’ is a country clip-clopper with a maniacal gleam in its eye, and ‘Psyche Ersatz’ recalls the ECR’s previous incarnation as The All-Seeing I at their seedy best. ‘Man In Me Lyfe’ is the only track that falls a bit flat at first, attempting the same sort of stomp as ‘Sweet Saturn Mine’ while stumbling slightly, but it’s properly flying by the end. Hopefully it’ll earn them the same amount of attention as the fictional band do on the album. Well, apart from all the sinister stalking stuff. 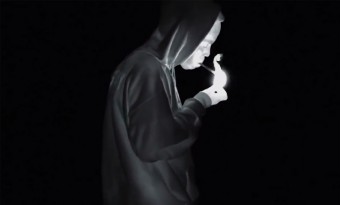 Has Amerie got more than '1 thing' to offer? Is Earl Sweatshirt's new single bound to give you 'Grief'? And will Nile Rodgers 'Be There' every summer from now until eternity? Find out in this week's Single-Minded...
Read More