From the return of old friends to the arrival of new ones, grab a cup of punch and get mingling at the Single-Minded social…

Despite shoegaze now being quite a long way past its sell by date, ‘Sparks’ is a luscious slab of thick production values (trusty Hammond organ and all) and comes complete with a subtly engrossing distorted guitar outro. Nicholas Burman

Creeping in through a spooky haze of electro smog, ‘Piece By Piece’ is a fearsome beast, full of foreboding and punctured by the glint of flashing blades. As such, it’s not really likely to get you dancing, but if sitting alone in a darkened room feeling paranoid is more your thing then it’ll do just fine. Kier Wiater Carnihan

Clap! Clap! is back with another burst of thrusting, percussion-driven electronica. Not the biggest tune we’ve heard from him, but with nicely placed vocal samples and a fun rhythm ‘Camo’ is certainly a welcome return. NB

Demob Happy – Wash It Down

A hair-friendly grunge revival isn’t the most surprising thing in a year where a Kurt Cobain documentary has managed to fill up endless column inches. Despite feeling that I can’t really enjoy blueprint rock now I’m over the age of eighteen, ‘Wash It Down’ is probably as good as you could hope for from this particular Lazarus-like rebirth. NB

Despite the carefree title, ‘It’s Time For Fun’ feels as joyously end-of-the-world as many of Goat’s previous tracks. But then, maybe nihilistic psychedelia is the point? NB

H A U N T E D is the new alias of Phil Jones, who first came to our attention as Dog Bite back in 2012, when the brand of spaced out indie-pop he specialised in ruled the (chill)waves. ‘Soft Night’ is just as spacey, but with a pleasing addition of some snappy beats and electronically-induced euphoria that suggests nights out clubbing rather than nights in at home with a microphone and some effects pedals. Akin to Animal Collective’s Merriweather Post Pavilion in many ways, and deserves as big an audience. KWC

I really liked Meat Wave’s Brother EP and I really like this too, despite the fact it sounds a bit like listening to My Vitriol practising through a Camden rehearsal room wall circa 1999. The rough-around-the-edges production of ‘Delusion Moon’ suits them well, and will hopefully be retained on their forthcoming album of the same name. KWC

While it’s not like Mica Levi hasn’t been keeping busy in the interim, an actual new Micachu & The Shapes album is real cause for excitement. While it’s fair to say ‘Oh Baby’ isn’t the sort of jerky, upbeat track they’re known for, that doesn’t dampen our enthusiasm a jot. Sullen, wounded and employing the sort of warped discordance that have seen Levi’s soundtrack and classical compositions so celebrated, her voice is also treated in a way that makes it sound oddly masculine, Planningtorock-style. Not what we were expecting, and all the better for it. KWC

Considering its title, and the name of the band who’ve composed it, I didn’t expect ‘Sianne Don’t Work In A Factory’ to be a particularly conventional offering, and so it proves. If the opening two-minute noise crescendo doesn’t scare you away however, you’ll be rewarded with a surprisingly sweet, synth-led post-punk number which waltzes around a scratchy viola loop. Maybe it’s just the title, but it ended up making me wonder what a Gang Of Four 7″ would sound like at 33rpm. KWC

I spent most of this track’s 7+ minutes trying to work out whose voice singer Tim Darcy (nee Beeler) reminded me of. The surly cadence immediately brings Mark E. Smith to mind, but eventually I realised it was Paddy Considine’s mentally challenged character from the Shane Meadows film A Room For Romeo Brass. Without giving away any spoilers, that basically means he seems harmlessly quirky but with an edge of menace underneath. A pretty good combo I’m sure you agree, and when combined with the unfurling, Life Without Buildings-style instrumental, it’s even better. I never really got on board with Ought’s last album, but I’m right at the front of the queue for the next one. KWC

I’m nowhere near enough of a Prince know-it-all to be able to judge this against his previous output, but on its own merits it sucks. No one wants glam to come back. If Muse had done this track everyone would have laughed. NB 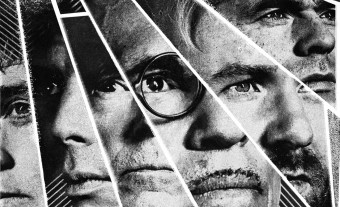 Should the artistic streams of music and comedy ever cross? Franz Ferdinand and Sparks' FFS collaboration suggests that sometimes they should, in our latest Haiku Review...
Read More