Readers, I’m going to start this review with a relevant personal anecdote. I went to see Viet Cong on January 29th, came home, excitedly banged out the below and went to bed. The next morning on my commute, I fell over on an icy sidewalk in the middle of a snowstorm and broke my right arm, then had surgery just over a week later. As a result of this medical misadventure, this review is very, very late – trying to type one-handed is about the least fun thing to do with your time, FYI. I haven’t edited the below to reflect its lateness, and I’ve added very little to it, even though I have a lot more to say about Viet Cong. I like its current state; a funny document of some dumb crap that happened to me.

Viet Cong is a band with Baggage, in the most romantic-comedy-heroine sense of the word. At this stage in their career, a scant week after their debut LP’s pronouncement as Best New Music on Pitchfork, I suspect most of the readers of this review are aware of said Baggage. While it’s a long, dramatic and interesting story, I don’t feel it’s very relevant in contextualizing Viet Cong’s music (and anyway, if that’s piqued your interest, just google it, man). I’m basing that opinion on having spent a while with both the LP, its goddamn sublime lead single, ‘Continental Shelf’, and having seen them perform a thoroughly engaging show this past Thursday at the Mercury Lounge.

I’ll get my one Women reference out of the way. Matt Flegel and Mike Wallace – bassist and drummer respectively – play like two dudes who’ve played in bands together for the better part of a decade. They are one hell of a rhythm section. The bass and drums interact in the manner of a conversation between two people who are talking to make sure they agree. While their record is reasonably funkless, the live show had a low-slung lope to it that I didn’t anticipate – verging on motorik. Certainly, this alteration is partially down to the excellent mix at the Mercury, but nowhere near entirely. That shit was LIMBER. These guys sounded like they’d been on tour for a million years, to the point where their complex syncopation sounded positively flippant. It sounded EASY, and dude, it is really, really not easy.

To the best of my knowledge, Matt hasn’t been the frontman of a band before. Also, I think it’s not well known that he’s done some terrific work as a sideman – to known weirdo Chad VanGaalen, and NYC guitarist Marnie Stern. Matt’s always been a pretty goofy jokester onstage, as a foil to whoever’s up front, and it was interesting to see him adjusting to being The Guy. He started out the show goofing on himself, with a self-deprecating off-mic comment – “Let’s play this one how it’s supposed to go!” immediately before playing “Continental Shelf” – but as it became clear the audience was totally on HIS side, he loosened up considerably. I’m really interested to see how the band’s performances evolve with their new wider audience, and Matt’s increased visibility onstage. Which is not to say he’s not always been a great performer, and he’s clearly very comfortable onstage. However, it’s a very different thing to be a scene-stealing jester bassist in a variety of acclaimed underground bands, than to be the singer and frontman of a hotly-tipped independent band on the rise. It’s clearly a mental adjustment that’s taking place as we watch – as I watched, while they played.

Viet Cong have one record, which clocks in at a slender 37 minutes. They played pretty much the whole damn thing (I didn’t write down the setlist – SORRY – is this bad reviewing?) as well as a new song, which somehow came out to be a set pretty well dead on a full hour. There were definitely some workouts, but of the settle-in-to-a-groove type, not so much the noodley type. I feel like this band is a pretty stridently noodle-free zone. The mix was VERY good, and very bassy, which is fuckin’ key for the physicality of those extended workouts. Scott Munro and Daniel Christiansen, guitarists and synthers both, were synced in tone and intention, but mostly not in rhythm or melody. Perfect counterpoint for that dexterous rhythm section.

Generally this is where a classical reviewer would exhort you to go see this band before they’re playing much bigger venues, and sure, it’s true that you should see them soon, they are very very good indeed. I think that this standard reviewer – uh, meme? – comes from the fact that when a band is headlining a 300-capacity venue just after their first record’s come out, they’re generally at the BEST stage in a really good band’s development. It’s the tipping point between confidence, practice, and energy, before meeting the later pressures of following up and road weariness. So yeah. See them soon, no matter what size venue they’re playing at. 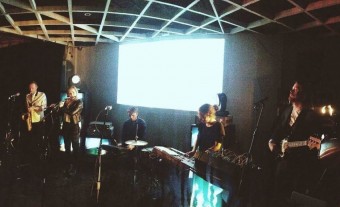 It was hard to know what to expect from this highly conceptual multimedia performance by Yila & friends, but while the meaning may have threatened to go over our heads, the music certainly didn't...
Read More