Tucked behind a petrol station just off Stoke Newington High Street, Total Refreshment Centre is one of those buildings so well hidden it feels like stumbling on the secret lair of some arty gangster. Entering through a yard haphazardly scattered with paintings and furniture in varying states of repair, it’s hard to escape a vague feeling of illegality, either that you’re unintentionally trespassing or that the building itself is actually a very well-maintained squat. Certainly the relaxed vibes around what is actually one of London’s most vibrant creative hubs (to recklessly use three words that should only really ever be uttered by an estate agent) lead you to half-expect someone to wonder out of one of the studios in their slippers at any moment and offer you a cup of tea and a spliff.

Beyond the offices and studios that host the likes of All Tomorrow’s Parties among others, Total Refreshment Centre is quietly cementing its position as one of North East London’s most consistently progressive and impressive live music venues. For example, a fortnight earlier the excellent Landshapes finished off a month-long residency here alongside morph-suited noise-spewers Berberos; indeed, before tonight’s gig a couple of Landshapes members can be seen mingling amidst the Scrumpy-clutching crowd. (There may have been members of Berberos there too, but they wear masks onstage so who knows?)

They are here to see (and indeed take part in – more on that later) the second ever performance of Souvenir, a conceptual touring performance that attempts to pose questions about collective memory and psychogeography. It’s the brainchild of one Alastair McNeil, aka Yila, in collaboration with the writer Steven ‘Polarbear’ Camden and a host of musicians, film-makers and animators who’ve previously worked with everyone from Faithless and Bryan Ferry to Zero 7 and Floating Points. What all this would actually amount to was anyone’s guess, but the banks of televisions stacked onstage suggested we’d be diverging at least somewhat from the regular eight-tracks-and-out gig formula.

Yet to begin with the differences are muted, with the ensemble onstage initially consisting of two synths, electro/acoustic drum kit, flute and saxophone, all bathed in violet light. The first track starts building and turns out to be one of the best, a bouncy slice of lofi electronica that ebbs and flows in the low light, before a projection of a block of flats hits the screen to the sound of a domestic argument in full swing. (A recording that is, no one was having a barney in the audience.)

The initial impression is of a jazzier, am-dram incarnation of Coil, but the arrival onstage of a trio of close-harmonising vocalists necessitates an immediate reassessment. At times shades of Micachu are audible, particularly her work with Tirzah, with occasional jazz freakouts keeping everyone on their toes. While at first the disparate elements of Souvenir seem to clash in a way that feels slightly unrehearsed, gradually everything syncs in and the sound begins to meld together to form a formidable, flavoursome whole.

The next surprise comes during a track about kneading dough with your Nan, during which a host of extra harmonies appear courtesy of several women standing next to me (including the girls from Landshapes) who suddenly morph from fellow audience members into active performers. They proceed to segue into an a cappella section which sounds like something from the O Brother Where Art Thou soundtrack if Meredith Monk had been on music supervision duties. The sharp change in tone works brilliantly and while it isn’t my favourite piece of the set, it’s my favourite moment.

A somewhat sinister onscreen poem and a final echoing snare hit add a dark undercurrent to what would otherwise be a pleasantly bucolic final track, underlining the unpredictable nature of the performance. However, while the concept and multimedia elements of the show provid an intriguing layer, it still feels very much like a gig at heart; albeit one more ambitious than the average offering. Perhaps the most effective technique was the placement of the choir in the crowd which created a feeling of inclusion and collaboration as if we were taking part ourselves, even if we were actually doing little more than tapping our feet or idly thumbing the ring pulls on our beer cans in time. 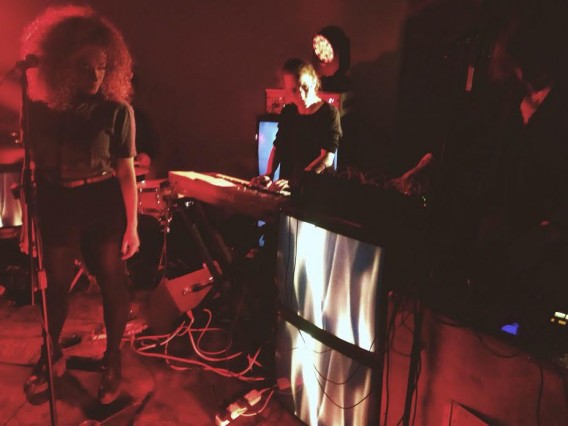 At one point these words flashed onscreen: “Outline me. Define me. Do me. The new alone.” Was this intended as a universal modern plea for any hint of intimacy and meaning in an age where most communication seems to take place through a device? Or something else entirely? Only Yila knows for sure, but for a brief period of time, in one of the few venues in London which seems to genuinely engender a sense of community, Souvenir makes sure that no one feels alone. 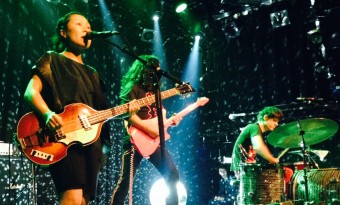 Deerhoof's chaotic jazz-punk carnival has never failed to engage audiences, but can they take it up a notch and make an emotional connection as well?
Read More