Described as a practitioner of “avant-garde balladry,” Toronto’s Eric Chenaux has been both beguiling and bewildering listeners for almost a decade now. Skullsplitter, his fifth album on Montreal label Constellation Records (responsible for some of the most essential leftfield albums of the last twenty years), sees him continue on his singular path, utilising techniques such as physically swinging speakers with recording engineer Radwan Ghazi Moumneh. The result will leave you feeling either spellbound or seasick.

Opening track ‘Have I Lost My Eyes?’, for instance, may leave you asking whether you’ve actually lost your mind. Chenaux’s warped, woozy guitars seem to ooze out of the speakers like he’s left them sitting on Salvador Dali’s radiator, before his clear, placid vocals give them something solid to stick to. His voice has something of a Nick Drake quality to it, and seems to flow downstream in a similarly untethered fashion, washing up against the sort of secluded, jazzy shores that John Martyn or Gil Scott-Heron would occasionally visit during more melancholy moments.

Yet there is a freeness to Chenaux’s compositions that transcends traditional comparisons. His wah-wah guitars yawn and drool in such a way that you sometimes wonder whether even he knows where he’s going next. Yet whether improvised or not, the overall impression is that whichever route he takes, he always ends up exactly where he intends; no matter how confusing the map, his voice, like a compass, always points in the right direction.

The currents he’s subject to take even previously released songs in new directions. ‘Skullsplitter’ is one such number, and finds his voice in even finer form, softly soaring over gorgeously undulating keyboard chords that eventually sink into a fulfilling drone. ‘My Romance’ then sees his melodies transposed onto guitar, weaving through a vibrato solo in such a way that it almost sounds bowed. It’s a testament to his musicianship that his playing here is as expressive as his singing.

The acoustic solo on ‘Spring Has Been A Long Time Coming’ is a lot more ramshackle, stumbling from note to note like a carousing drunk reciting half-remembered poetry in a red wine haze, while strolling home along a country path. The awkwardness is almost too jarring at points, but is happily contrasted by the sobriety of Chenaux’s voice.

The combination is altogether tastier on the eight-minute ‘Poor Time’ however, where his voice pulls together the twisted accompaniment like a fork winding through spaghetti. ‘Le Vieux Favori’ (‘Old Favourite’ in French) has an altogether thicker texture, as if Chenaux has been refracted into a chamber orchestra. The resulting music feels like slowly drifting through a hall of mirrors, phrases being shot back and forth, each time manipulated into a different shape while remaining recognisable.

‘Summer & Time’ is the sweetest song of the lot, with Chenaux asking “When will you be home? / The place is cool and warm” as his acoustic guitar softly crackles like a fireplace in the background. It’s probably the most accessible song on Skullsplitter, but as a result possibly the dullest too. Nonetheless, if you find Eric Chenaux tends to leave you feeling queasy, you should find this settles your stomach. Others, meanwhile, will be turning the record straight back over in order to split their skulls all over again. 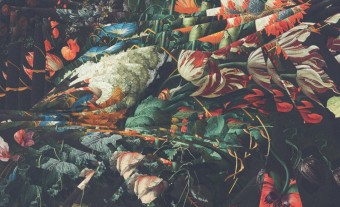 Their name might make them sound like someone's grandad, but Swiss six-piece Len Sander have served up the heartbreak album of the year. Get your tissues ready...
Read More