The Yuseddit Brothers are, confusingly, just one man, albeit one with a talent for making Yiddish-sounding band names out of the most American of phrases. Luckily that man, a Canadian who goes by the name Shane Campbell, also has a talent for producing crunchy, sun-baked slacker-rock, as evidenced in his debut single ‘Metronome’. Even better, the accompanying video shows he clearly possesses a sense of humour and unparalleled budget-stretching ability.

Seriously, it’s amazing the amount of music videos where the director has clearly been given a decent budget, only to spend it on nothing more interesting than an expensive location, a flashy camera and maybe some floaty bits of silk. Which they use to produce a video simply showing the act in question doing what they do normally, but in an expensive location and surrounded by floaty bits of silk. Oh yeah, but it’ll be shot in gloriously high definition. Which is really important when 90% of the people who watch it will do so on YouTube.

In contrast, with only a small budget, a cheap back-alley location and absolutely no expensive bits of silk, the video for ‘Metronome’ manages to feature a laser shoot-out, an alien invasion and an army of clones. Oh yeah, and an important message from the future at the end. All in the same alleyway, all within three-and-a-half minutes. Now that’s how you make a music video.

Of course, even all that wouldn’t count for much if the music was crap, but luckily ‘Metronome’ is hugely enjoyable even sans screen invasions. Saddled to a drowsily loping rhythm (pleasingly ironic given its title), the fuzzy guitars and bass strut alongside with palpable insouciance. This is a song that doesn’t wake up before noon and is passed out by midnight, probably after one too many hooches.

In an interview with Impose, Campbell described the recording process with the following bizarre maxim: “Mixing your own music is like messing around with a dead horse and trying to bring it back to life. You have to really love the horse.” We don’t, to be completely honest, have a fucking clue what that means. But if you only buy one dead horse this summer, make sure it comes from The Yuseddit Brothers’ stable. 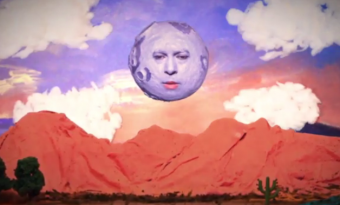 Ever wanted to see Bill Callahan star in The Mighty Boosh? This is as close as you'll ever get...
Read More