Len Sander might sound like the name of the local carpenter your grandad drinks bitter with in the Dog & Duck, but fortunately Phantom Garden is not an album of skiffle tracks knocked out in his shed on Sundays. Instead, it’s the debut album from a Swiss six-piece whose ‘Ungrowing’ video we had the pleasure of premièring last month. It may also be the break-up record of the year.

It’s also apparently taken almost ten years to finish, and you can hear from the slick way ‘Flickering Lights’ slips in how the hours spent on it have paid off. There’s a touch of the Radioheads to Dennis Schärer’s mournful guitar arpeggios, while singer Blanka Inauen sets the breathily melancholic tone for the rest of the album.

There are initially some Portishead vibes to the equally gloomy ‘Electrocardiography’, albeit without the dusty, crate-digging vibes of Bristol’s finest. In fact, the association is sadly left behind during an underwhelming chorus, although fair play for actually fitting the song’s title in there. A hard one to scan, but Inauen just about manages it.

The title track also plods by without providing much more than a half-decent synth bassline to prick the ears up, but after that the album really begins to swell thanks to lead single ‘Ungrowing’. The sparse composition and cymbal ripples set things up nicely for ‘Nightshade’, which seems to settle on the centre of the record like a sparkling mist. The withdrawn keys are lightly sprinkled with droplets of percussion, leaving it sounding like a Lorde track stripped right back to its breaking heart.

‘The Bird’ then swoops in, all gently throbbing bass and quiet drama, before ‘Black Bryony’ chucks a bunch of salty piano keys at you before fleeing in tears. To be honest, not all the songs are especially diverting in terms of composition – each tends to be fairly similar in terms of mood, tempo and range – but the production is so dexterous and thoughtful that each is showcased in a perfect light. A six-piece band has probably never been presented so minimally, and they sound all the better for it.

The pulsing percussive thuds of ‘Mendrake’ pick up the pace a little, calling to mind the dark bass tracks of Emika (another superb producer) and adding an appreciated change of colour to the album; even if that colour is just an even darker shade of black. “I can’t be / If I’m not repeated in your reflection,” sings Inauen, and it’s a feeling that will resonate with anyone who’s been left psychologically adrift at the end of a relationship.

See, Phantom Garden is in many ways a romantic album, but it exists at the end of a romance rather than the beginning. The ideal way to experience it is probably accompanied by the sound of rainfall against the window of an empty bedroom, while weeping onto still-warm sheets recently vacated by a departing lover.

Yet as the album seems to be slinking out the door with ‘Animal State of Mind’, a rousing crescendo, or as close to a crescendo as this most restrained of albums gets, seems to offer a touch of optimism. Len Sander may be leaving, but you get the sense a tearful reunion is on the way. We look forward to it. 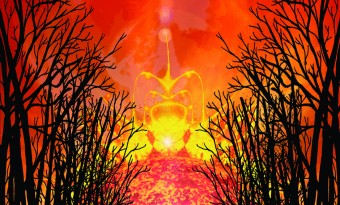 Tad Doyle (you know, from TAD) presents Brothers of the Sonic Cloth, an album heavy enough to kick-start the apocalypse. Or at least eviscerate a goat...
Read More