Having not heard a whisper from Wye Oak since their formidable debut album Civilian in 2011, their new material comes as a bit of a shock. The taut emotional indie of ‘Holy Holy’ and introspective folk stylings of ‘Doubt’ is long gone. In its place, we now have the ’80s electro-pop of current single ‘Glory’, and the jerky, wonky synths of the track that accompanies their brilliant new video – ‘The Tower’.

The clip sees the Baltimore duo collaborating with fellow city resident Ben O’Brien, an artist and comedian associated with the comedy wing of notorious B’More collective Wham City (which has spawned brilliantly bizarre acts like Dan Deacon and Ed Schrader’s Music Beat). Now admittedly, the following description will likely turn a lot of people off immediately, but I assure you that, despite being a wacky video inspired by mime, those words should be digested in the knowledge that they’re implemented in the least irritating way possible.

You should probably just watch the video to understand why, but in case you need further convincing here’s a cast iron guarantee: you will laugh at least once. If not, we’ll pay for you to enrol on your nearest humour awareness course. The two lead actors in the clip (sadly not band members Jenn Wasner and Andy Stack) are perfect as a pair of deranged decorators, although much like restaurant managers will have balked at Le1f’s customer service in the video we featured last week, we’d advise any Baltimore residents to look elsewhere if they need their house painted.

However, the really impressive element of ‘The Tower’ is the choreography. Considering the extremely odd time signature of the track (fifteen beats per phrase by my count), it all manages to look extremely natural. Well, perhaps natural is the wrong word, but certainly more fluid than you would think. The track itself is also endearingly quirky, with the day-glo synths and fuzzy bass clashing brilliantly against the occasional scratchy, dissonant strings. If Wye Oak in 2011 was an actual tree, it would’ve been somewhat gnarled and forbidding. In 2014, someone’s wrapped fairy lights around it and tripping lunatics are hanging from its branches. And that’s just fine. 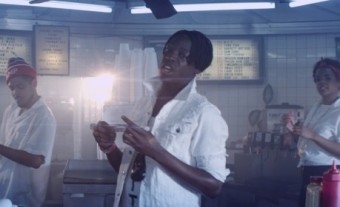 It's just as well Le1f's a talented bastard, because he's probably scuppered any potential fall-back career in the catering industry with this video...
Read More