A crumpled wreckage of grease-proof paper that’s been smeared in far too much grease. Its ‘proof-ness’ overwhelmed to the point of saturation, negating its core intended purpose. Its paper content, once emboldened and protective, barely registers through the clotted wads of rendered lard.

The once delicious matter that it had so seductively held within its enshrining confines spill out across a grey wet slab of cracked concrete. Isolated in a corner of a deserted station platform, sticks of life are carelessly left, strewn and rotting.

Chips. Chips all over the place.

A disgusting visceral shock, like a kick in the teeth with a shoe covered in dog shit. That is the delightful stench that this debut EP from new duo Soft Issues left hanging in my audio-nostrils.

Soft Issues, formed earlier this year and hailing from Leeds, feature members of the truly excellent Cattle and the now sadly defunct Super Luxury, who themselves released their final EP in September – check it out.

This self-titled EP will be released on cassette tape (I love a cassette me) through the also Leeds-based Concrete Block label in November, but you can download the EP from the band’s Bandcamp page now as pay as you want, which is nice.

This EP is the sound of the desperate creatures of the earth scurrying to and fro from the spilled moulding potato mush, carefully – but greedily – carrying away chunks of debris in their mandibles, using it to create a new and deconstructed shape.

Influenced by the ‘aggressive immediacy’ of punk and hardcore and the work of industrial/noise bands like Gerogerigegege, Masonna and Rusted Shut, the EP is not easy listening. If you’re a fan of the intense combination of harsh, agonised noise and droning synth-punk then this may be for you.

Opener ‘BDC’ is a horrible whistling howl of disturbing industrial noise and screeching vomit-inducing vocals. ‘Radiator Paint’ a bubbling, sci-fi nightmare of sonic brain mangles, like several bombs all going off at once.

The brilliantly titled ‘The Thrill Of Seeing Your Friends Fail’ releases from the clenched fist of the furious openers with a slow, ominous drone and low whispered vocal clips – the sound of distant pain echoing through a long and dark corridor.

It’s an eerie palette cleanser that moves straight into the horrible machine gun throb of ‘Degloving’. The harsh scraping clatter of the EP’s five tracks jars and corrodes in the mind, building a scaffold of decay.

Lyrical subject matters across its 15-minute duration ranges from the mundanity of life (‘Radiator Paint’) to being witness to horrific accidents (‘Degloving’), though you’ll be lucky to decipher any words clearly through the bleak mouth screams.

As ‘Degloving’ veers towards the EP’s end, the faltering, pollution-enshrined sun is momentarily blotted from the smeared brown ceiling that we call a sky.

Final track ‘Hetchell’ replaces the dispersed glow with a shadow, a shadow that is cast across the land as the sky comes tumbling down, destroying all as it crashes into the man-made horizon. Remnants of musical clarity and cleanliness remain but they are grossly deformed and distorted.

Among the wreckage is a crumpled and eviscerated bag of soggy chips, hiding under a now half-formed bench.

On that bag of greasy chip paper sits a face, a face sporting a big shit-eating grin.

That face is this EP, smiling at you through the audio rubble that it has wrought and cocking you a cheeky, lovable wink. 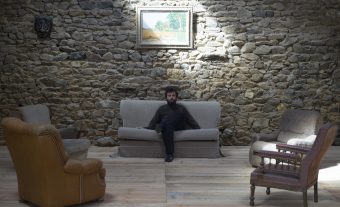 Synthesizer specialist Losange has announced his first album, the sparkling 'Quartz', and we can exclusively reveal the first music from it today...
Read More