It was around this time last year that Losange’s self-titled EP started melting its way into our ears, so it’s a pleasure to reveal that a full-length follow-up, Quartz, is now shaping up for release in September.

The Provence-based synth enthusiast is still channelling influences that range from Air to Mozart via German psy-trance pioneers Electric Universe, but Quartz was also composed according to specific artistic parameters. Described as “an ode to the computer”, Losange challenged himself to keep to a strict protocol: using one synthesizer with only one type of synthesis, with a specific number of values and parameters. Unmixed and unmastered (“thanks to an FM synthesis that settles any sound issues with surgical precision”), Quartz can be considered a “manifesto against the extreme sound compression that [Losange] feels impoverishes dynamics”.

If you want to know what that sounds like, look no further: we have the first music to be released from the album exclusively on The Monitors. ‘Atone’ is an engrossing, meditative piece that stacks and swaps layers of harmony to create a delicate rainbow of music. The playful halving and doubling of time also make sense considering the album’s title, a reference to quartz’s association with temporal regulation when used in clocks and watches.

The title of ‘Atone’ is also a play on words, as Losange explains: “in French it means lifeless, and in English it means expiate, but something a-tone can also means something toneless. The album Quartz is a poem, and ‘Atone’ is the origin: something lifeless without tone; only the idea exist[s], only the notes”.

Have a listen to those notes here, or check out the video at the bottom for the appropriately colourful accompanying visual: 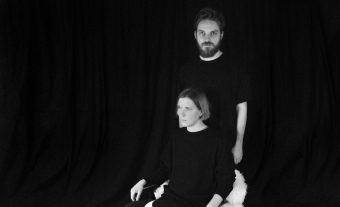