Lelystad is a purpose-built city in the Netherlands, founded on reclaimed land in the late 1960s. Its attractions include one of the world’s finest collections of model ships, an aviation-themed theme park, and something called National Old Timer Day. If you can countenance tearing yourself away from these myriad delights, once a year, it’s also the dropping off point for Lowlands.

Lowlands is another addition to the Euroschedule of summer fests. Unless you’re Dutch you might not be au fait with the festival, which started life as a vaguely countercultural offering (though it doesn’t show much evidence of that these days). In the larger international picture, it doesn’t quite boast the dense, inter-stage-hurtling roster of a Primavera or one of the upmarket canonical UK entries, but it’s certainly a decent thing you could do in mid-August, if you like to see music bands. Lelystad is a half hour from Amsterdam on the fast train, so you can go hang out there for a bit too if you want to have a yuppietastic long weekend too.

Feel-wise, it’s pretty chill, though the dope clouds we were promised didn’t seem to materialise. Indeed, it all feels very civilised – though this might just be in contrast with the urine-soaked aggro/shame of the British and British-infected festival paradigm. You can even eat pretty well, if so inclined; it ain’t cheap but hell, it’s a festival and you certainly could get less for your munten elsewhere. Munten, yes. For some reason, you can only buy stuff with the festival-specific currency that works out about €3.50 a plastic token. Not totally sure why, but there never seems to be much of a queue at the bar…so cool? Also: heh heh, munten. 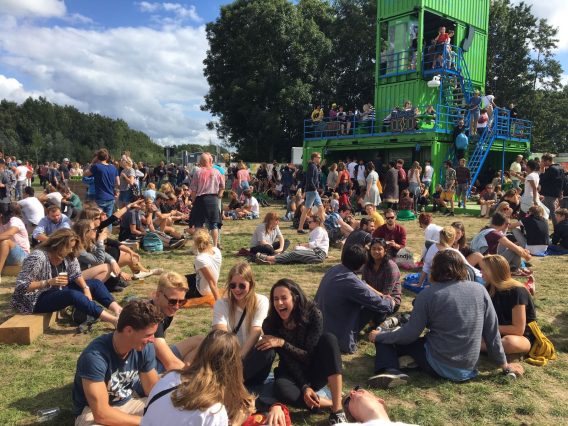 People are having a Good Time

We’re in Europe’s most densely-populated nation, and you can totally feel that in the stream-veined campsites (hazards!) in which most spots will afford a view of the back of someone else’s tent. A bucolic idyll it is most certainly not, but that’s fine, that’s not why we’re here. We’re here to see some bands. Let us tell you a little something about some of those bands.

Day one we took in a bit of Solange. Her choreography is a bit naff, but the band is tight. Hard to shake the feeling she’s a bit of a pre-packaged social conscience special edition for those who ain’t so into the other Knowles (or is she a Z now?), and then feeling guilty for being such a cynical bast. Don’t ask too many questions though, and hey, it’s well put together pop with credible references and such. 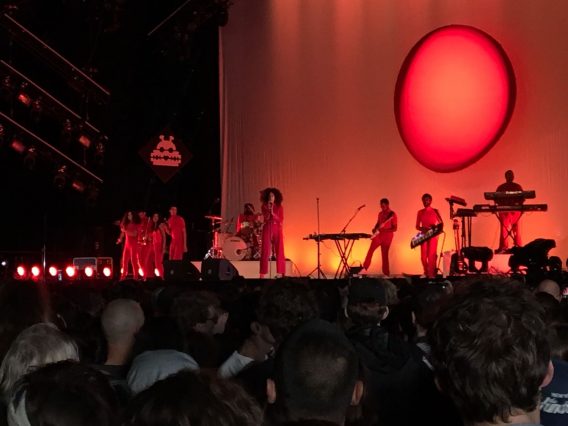 Mac DeMarco is another of whom one might ask questions, leaving you in an ambiguous space between musical sophistication and robust tomfoolery. The latter this time comes in the guise of an extended, tempo-shifting cover of ‘Gypsy Woman (She’s Homeless)’, a tune clearly well overdue a revival. Even if you’re not a person of nonsense, mind, there’s always a lot of jangly, dreamy pleasure to be had from a Mac DeMarco set. Is it kind of like that Achewood skit where Ray says he can only deal with having Teodor fellate him by talking the whole time to stop it getting awkward?

Fewer questions to ask of Moderat on the big stage. They’re workmanlike, but enjoyable. You can have a good old dance around and not feel too ashamed of yourself, beyond the thirst in your soul for Class A drugs. They’re followed by the night’s headliners, The xx, who are shiny and big in a big-stage band sort of way. Probably, it’s very powerful and emotive for those masses of people who love The xx, but perhaps a bit soulless and mechanical if you happen to think The xx are second only to Arctic Monkeys in terms of their emperor’s new clothes-level of mediocrity. Whatever; there are lights and water features and we’re all pissed, so fine.

For the late night we popped expectantly to catch a bit of Clap! Clap!’s afro-tinged glitchy fun. Turned out to be a bit more of Eurotrash-tinged fudge than anything, so maybe stick to the record if you don’t want to be rhythmically pissed on aurally, while being taunted with snippets of the stuff you actually enjoy.

On Zaterdag we started the day with pop punkers/rockers Black Foxxes, who are as pleasingly honest on stage as they are on record. The songwriting is actually of a high-enough standard that it wouldn’t be overly surprising to see their appeal overreaching the fact they are a straight-up guitar band, making music that would fit in seamlessly 15-odd years ago when there were scenes and that.

Sampha, since crowned as Mercury Prize winner, has obvious appeal in spades. Classy stuff, without ever being arch. His band work without a guitar, which gives it a cold, clean edge, though with a lot of percussion, which means it’s still fun. Skepta is also lots of fun, and it’s pleasing to see something so overwhelmingly Landan in this strange corner of the Netherlands. Nice to know it translates over the North Sea, really. He seems like such a nice chap also. 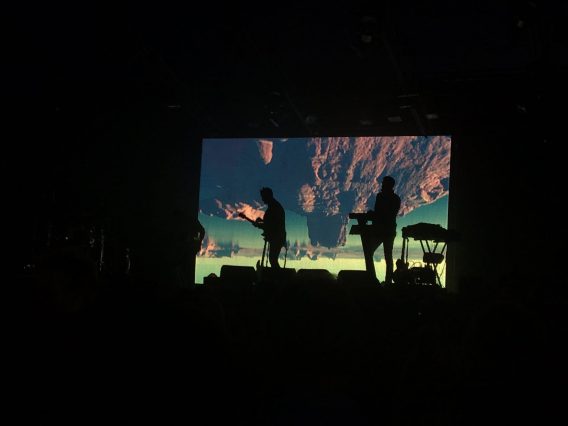 Tycho can’t quite match Skepta for cred; indeed, they’re clearly massive fucking nerds. That’s fine though, cos they’re using their nerdy powers for good, making pretty, dreamy soundscapes, with a solid rhythmic engine that keeps the endorphins pumping. They’re not reinventing music, but hell, they do what they do really well.

Editors are tonight’s main headliners; it’s a mystery how they got this big, but fuck it, there are worse things in the world than having some songs that sound a bit like Interpol. Like having songs that sound like Muse, without the ambition. Meh.

Vince Staples’ set is somewhat murky and steamy, perhaps by virtue of the shitting rainstorm we’ve just been caught in, but something about the steam rising in the hot tent kind of adds to the appeal of this bright light of contemporary American hip-hop. Almost gives it a quasi-religious vibe, but don’t tell any of the rap geeks, who need no further encouragement. 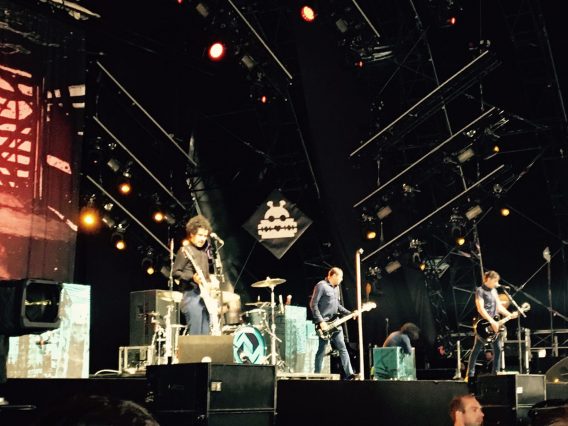 Speaking of quasi-religious vibes, At the Drive-In seem to be back… albeit not with a vengeance. In fact, if you’ve been waiting half of your life to see them (y’know, just for example), you might be a touch underwhelmed. Mind you, they’re playing off a listless audience, so maybe the feeling is mutual – it’d be good to see what this was like with a horde of frothing-at-the-mouth punters, maybe. Cedric’s still jumping around like a magical prat and Omar is still very good at playing the guitar, so at least there’s that. There’s some malarkey with tea too but at least there’s no sign of a typewriter.

Car Seat Headrest do a fine line in melodic, modern indie. Will Toledo et al, despite their slightly awkward, extremely earnest shtick, have got some pretty hefty crossover appeal. Which is nice when people are feeling a bit wobbly about guitar bands as a thing… 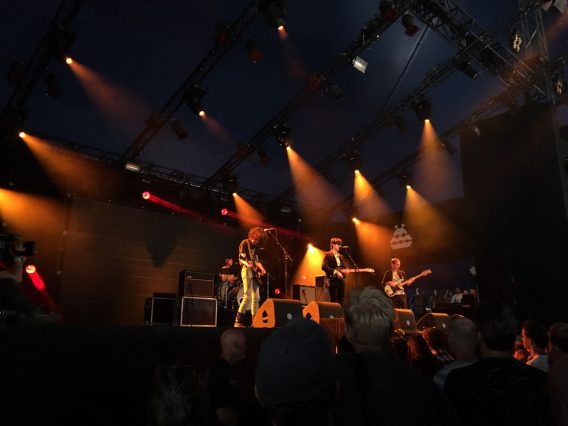 Returning to Latino musical titans, we go to see Cypress Hill for a laugh. It isn’t as funny as we hoped. HMLTD are pretty funny, but kind of for the wrong reasons. They might be a band for twats. Also, it smelled a bit like a farm on the stage on which they were playing. MC Ride would definitely eat them for breakfast. Death Grips, true to form, are rib-shakingly fucking intense. Which is fine, because that is what Death Grips are for. Kind of makes you want to go have a lie-down. 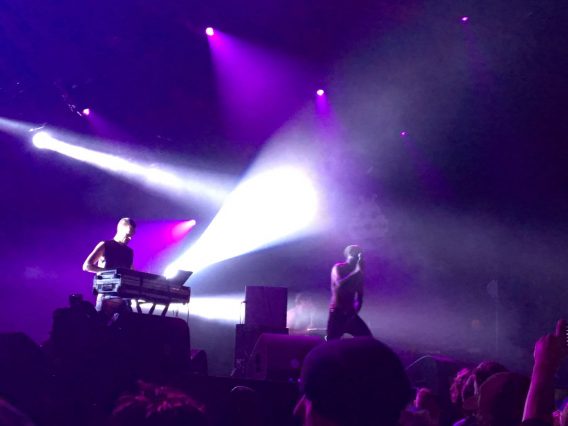 You could have a full night’s sleep in the time it takes Nicolas Jaar to actually start playing a tune. But, yes, that is the point of the Nicolas Jaar. It’s as big as a small planet when it gets going, and is certainly in contention for being the contemporary gold standard of thinking person’s electronic music. Which makes it very hard to tear ourselves away to go and see Future Islands. It’s worth it though; while they can’t get up there with Jaar for scale, they’re no slouches when it comes to pumping the old feelings meat. Also, who can resist a little bit of Southern charm, eh?

The last act proper we catch is the mind-bending magic of Warp Records royalty Clark, performing Death Peak in its entirety. It’s pretty smashing, but kind of in a way that makes you want this not to be in a small barn. No one’s mind seems to be twisted in a notable way either, which is almost a bit strange. Just lots of standing and nodding. These bloody civilised Europeans, eh…. 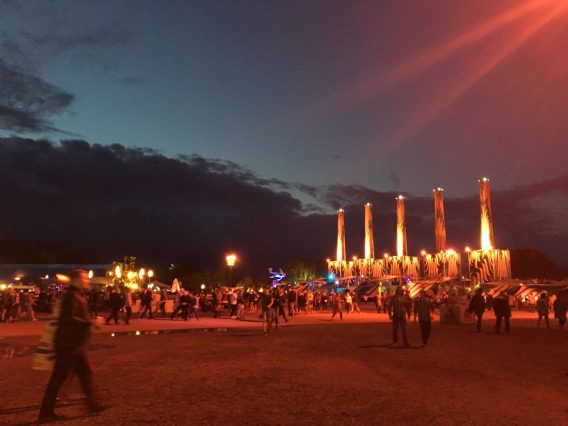 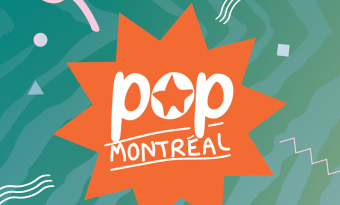 As POP Montreal celebrates it’s 16th birthday (and the city itself turns 375), we select some of the festival's most unmissable acts...
Read More