Something seems to be amiss as I turn onto Ashwin Street. The sound emerging from Cafe Oto, London’s centre for chin-strokingly challenging music, is not the usual squalling free jazz or avant garde noise. It’s not even the first murmurings of The Necks, who are due to start any second. Instead, they’re blasting out Drake.

For a second I wonder if I’ve got the right date, or the wrong reality. It’s only upon entering that I realise, of course, that the music is coming from a party at Dalston Roof Garden on top of the building. In contrast, the interior of Cafe Oto is almost silent, save for the extremely hushed sound of The Necks making their first appearance on the second night of a three date residency.

Still, while they’re not about to launch into a 40-minute modal exploration of ‘Hotline Bling’ (although what a thing that would be), it is certainly hot. Sweltering in fact. The tail-end of the hottest August bank holiday since records began has turned the venue into a furnace, a far cry from the temperate spring evening when I last saw The Necks play in the lofty, draughty environs of Union Chapel. It’s hard not to wonder how the crowd, let alone the musicians, are going to cope.

Luckily The Necks have a solution. Whether by design or serendipity, they proceed to play some of the most watery music I’ve ever heard. The opening ripples of pianist Chris Abrahams are accompanied by Tony Buck’s soft, babbling percussion, spreading softly through the venue as double bassist Lloyd Swanton delicately but assuredly selects notes from his fret using only his left hand. It’s a cooling, fluid progression that somehow mirrors the sweat trickling down my back.

It doesn’t stay so calm. As the music swells, a slow but relentless current seems to pull The Necks towards greater urgency. Abrahams starts to widen his scales, Swanton moves to bow, then fingers, and Buck’s cymbals start to break against the music with increasing strength as the overall volume increases. Soon the sound is tumultuous, crashing and cascading around us. It’s a crass comparison to make, but thoughts of recent flooding disasters in East Africa, North America and South Asia start to slip into my mind. It’s powerful stuff, and at the music’s dramatic peak it feels like it could almost run beyond The Necks’ control.

It doesn’t, of course. Gradually the storm dissipates and the music is brought back to the soothing territory where it began. Finally, after a period of time that’s hard to quantify, the last tones begin ebbing away until only Buck’s drizzling clack remains. Finally, that too evaporates. There’s a moment of silence as everyone tries to perceive whether the last frequencies have completely faded – then rapturous applause. I wipe the sweat from my brow and hit the bar and the merch stand, wondering how they can possible follow that.

Truth is, they can’t. Yet while The Necks’ second performance of the evening isn’t nearly as fluid as the first, it still contains some of the night’s most transcendent moments. The opening, in particular, is stunning, with Abrahams and Swanton circling an exquisite phrase that’s more emotionally harmonic than anything in the first half. However, after a few minutes it stops flowing so smoothly, and before long we’re in much knottier territory. It’s often hard to know with improv groups whether dissonant or chaotic moments are fully intentional or a result of crossed wires, but either way the band take a while to escape the musical snarl that develops.

The destination they do finally reach, however, is possibly the high point of the evening. Again the intensity builds irresistibly, with Abrahams moving up the register towards a passionate, heart-wrenching nexus, the sheer beauty of which means it’s hard not to feel a sense of loss as the music moves on, all too swiftly by their standards.

While we’re soon back on more difficult terrain, this time it feels more assured as Abrahams and Swanton fix their focus on high-speed repetition of single notes, sewn together by Buck’s expressive drumming. Once again the trio draw things to a graceful close, and if anything the applause lasts longer second time around. (The venue isn’t quite so roasting now, so perhaps the need to race away for cold air and cold drinks isn’t as urgent).

While obviously lacking the unique instrumentation and grand surroundings of last year’s Union Chapel performance, that only makes the creative scale of tonight’s performance all the more impressive. Whether building to a meditative swell or a chaotic crescendo, The Necks in full flow are able to lift you out of yourself, above the heat of the crowd, above the roof of the building, above ‘Hotline Bling’ and into the beyond – before nudging you back down to earth. Roll on their return in December… 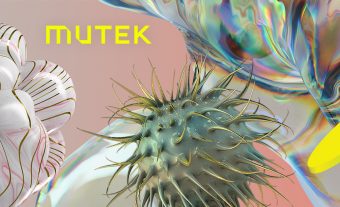 From quasi-Brechtian encounters to skull-piercing rods, we take a look at the impressive A/VISIONS programme at this year’s MUTEK Montréal...
Read More