This week, with the 18th instalment of Montréal’s festival of digital creativity and electronic music, MUTEK, we see the city once again play host to one of the most strangely unique festivals in North America. With a diverse line-up of more than 120 artists ranging from classic house DJs to blisteringly immersive drone, the four-day event is set to coincide with Montréal’s 375th anniversary, exploring cultural links between the city and other metropoles like London, Mexico City, Barcelona, and Berlin. However, the focus of this particular preview are the three signature ‘A/VISIONS’ programmes that highlight the audiovisual aspect of the digital arts.

A tradition at MUTEK, A/VISIONS are a series of nights that showcase the avant-garde of the technology-driven intersection between auditory and visual aspects of live performance. I often find that visual arts at electronic music festivals feel like an afterthought. As artists go unbilled, have their jobs relegated to nothing more than providing textural wallpaper or digital-pyrotechnical hype man, it’s refreshing that there is a place where they’re invited to really experiment and try and push the audiovisual relationship to its limits. Performances this year will return to Montréal’s historic Théâtre Ludger-Duvernay at the Monument-National.

The first installment of this year’s A/VISIONS series has only one sole artist playing, Robert Henke. A MUTEK alumnus, Henke has a long history of innovating and pioneering live-performance techniques and technology. His music production pedigree is long and storied; from his early work as Monolake (originally as a duo with Gerhard Behles) in the nineties, Henke has always been pushing the boundaries of sonic exploration, from drone and ambient to techno and dub.

This year, Henke is performing the third iteration of Lumière. Self-described as “eroding the barrier between visual score and musical expression”, Henke’s Lumière series manoeuvres on the interrelations of light and sound. Accounting for our persistence of vision, Henke sculpts the traces left behind our eyes at that limit of seeing where for a brief moment the image exists solely in our mind. Juxtaposing light with shadows to mould the “darker than black” shapes that emerge in the after-image, Lumière III promises a unique and indelible sensory experience.

The second night billed under the title ‘In The Realm Of Alchemical Interface’ brings together four multidisciplinary Montréal artists exploring the limits of the audiovisual, blending such time-honoured dichotomies as science and technology with art and sorcery.

The first performance is Imaginary Optics by moving image artist and composer Maxime Corbeil-Perron. With 3D glasses provided, Corbeil-Perron’s performance navigates the possible configurations of the audiovisual in three-dimensional space. In treating his visual elements as though they were sonic objects in an electroacoustic composition and pairing it with layered glitch-laden improvisation, Corbeil-Perron’s piece promises an interesting approach to space, movement, and texture.

Commissioned by MUTEK, this will be the debut of artificiel members Alexandre Burton and Julien Roy’s ‘Three Pieces With Titles’. Three Pieces fuses together technology, media arts, and music to create an audiovisual instrument that merges cameras, acoustic instruments, synthesizers and projectors.

The “three pieces” mentioned in the title refers to the ways in which audio influences the image, and image influences the audio, and finally the way in which sound and image work in tandem while simultaneously influencing each other. The audience will be encouraged to move and interact with the production in a quasi-Brechtian encounter described as “the breakdown of performance hierarchies and vectors of control – and lose themselves in the infinite abyss of the space-time of ‘re-re-recorded’ video projections and sound”. I’m not sure what that entails just yet, but my curiosity is definitely piqued.

A sample of a previous artificiel work, ‘condemned_bulbes’:

The final performance of the second evening is by multimedia artist Herman Kolgen, who will be channelling the experience of having had a metal rod accidentally pierce his skull in a piece appropriately titled ‘Impakt’. Driven by his traumatic history, Impakt is about violence, the body, and perception. Prominently featured geometric and disfigured bodies bordering on the uncomfortable and uncanny blur the line between digital and biological. The performance will be performed using a bazooka (yeah, that’s right, a bazooka), that he will use to bombard a digital target which then reacts violently according the variables of the projectile. In this work, Kolgen channels aggression, proximity, data and capitalism in a suffocating dystopian mixture of visceral imagery and sound.

The programming for the final night entitled ‘VoLuminous Visionariness’ finds each piece resonating along a similar theme that abandons the screen so that light can float freely to reflect and refract in the performance space.

Emerging Montreal-based Lucas Paris will start off the evening with his light and sound-sculpting work ‘AntiVolume IN/EXT’. With extensive knowledge of building digital instruments, Paris uniquely tailors each rendition to the location, creating space-specific, algorithmically driven light sculptures that react to his live improvisational performance. AntiVolume explores the synesthetic dynamics between timbre and colour to producing a textural and physical experience that draws from noise, IDM, techno tropes and rave-isms.

Partnering with Belgian sound artist Glenn Vervliet, Italian multidisciplinary artist Michela Pelusio will be performing the North American premiere of their kinetic ‘SpaceTime Helix’. Sporting a console and wearable interface, Pelusio’s sculptural opto-acoustic instrument is an interactive and transparent string that suspends from the ceiling. Controlled by the movement and breath of Pelusio — and reacting to light, sound and touch — the helix plays with helical symmetry and geometry. Drawing her influence for the piece from ideas of standing wave harmonics, a concept first put forth by Pythagoras and later confirmed by Kepler, Pelusio taps into foundation themes of modern physics. At once delicate and profound, I am extremely excited to see/hear it live.

Closing off the A/VISIONS portion of MUTEK’s programming is Mexican-born and Barcelona-based Fernando Corona, better known as the electronic musician Murcof. His sparse and minimalist interpretation of electronic music is saturated with aspects of ambient, minimal techno and IDM. With his productions’ intricate percussion and mournful melodies drawing from modern classical to musique concrète, his sound can be described as cinematic and invites visual collaboration.

Partnering with Corona for this performance is another Montréal-based member of artificiel, Jimmy Lakatos. Lakatos’ long history of working with video projections and light shows at raves and in public spaces makes him a perfect collaborator in a performance linking the poetic relationship between sight and sound. They will be performing a piece titled ‘Nebula’, an immersive A/V set-up consisting of RGB lasers and a semicircular screen positioned to diffract and create forms in the space of their performance.

Get the lowdown on Lowlands 2017 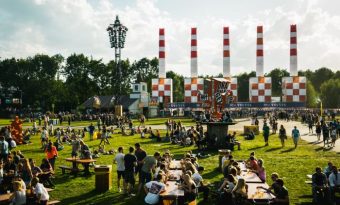 As one of the biggest Dutch music festivals, Lowlands pulls in plenty of well-known names. Here are five smaller acts we suggest you catch there instead...
Read More