Eric Copeland certainly has pedigree when it comes to making experimental electronic music. He’s an integral part of the Black Dice trio, and has previously worked with Animal Collective’s Avey Tare as one half of Terrestrial Tones. All of this comes in addition to his frequent solo work which has seen him appear on Ron Morelli’s L.I.E.S. and James Murphy’s DFA Records. Next up from Copeland will be Goofballs, his third album for New York’s DFA – it will be released on September 22nd.

Ahead of Goofballs dropping, we caught up with Eric to find out why he’s moved from New York to Mallorca, what his recording process for the album was like and how isolation played into his new album…

Patrick Swift: You’ve recently moved to Palma in Mallorca. What prompted the move and how does it differ from your previous residences like New York?

Eric Copeland: My partner and I were just looking for a change from NY. She’s Spanish and wanted to live closer to her family as well. It’s obviously a big change from NY – weather, language, food… it’s less expensive and healthier. I’ve got some distance from the politics in Washington. Nothing can replace NY but I’m in a good place for now.

Goofballs was made with a “minimal gear setup”. Can you break down that setup for us a bit and explain what a “homemade drum brain” is?

I left a long term private studio in Brooklyn that Black Dice had for a decade. We’d collected shit on shit, and I’d written everything through my speakers at volume. We purged the space before leaving NY and only some small pieces made it to Palma: a drum machine, a bass machine, and a little sampler. The drum brain is basically a handmade oscillator that was made by my friend Barry London. It’s a surprisingly versatile little sound maker, greatly appreciated in my paring down of gear.

Do you prefer to work with a minimal setup? You’ve also mentioned isolation regarding the recording process – has this affected the sound of Goofballs in any way?

I have no preference regarding my setup, it’s always an exploration into what’s available. I made my record Aladdin with no gear, just a cassette player. It’s more important to maintain my work than to sweat the gear. I work in private, have done for years. The isolation of Mallorca is more social as I moved my studio into my apartment and often only see my partner and dog for days. I don’t know how this affected Goofballs, but it does make me feel like I’m ‘on the clock’ more than when I had a separate studio…

You played some of the tracks from Goofballs while on tour with Animal Collective last year. Where exactly did you play them and how did they go down?

Animal Collective took me from San Diego up the coast to Canada, across the continent to Pittsburgh, mostly “b-market” as it’s called. It was a familiar tour. AC have thrown me many bones over the years. It’s their crowds so I’m just there doing my best. Nothing to lose.

Alongside your solo work, you’re also known for your work in Black Dice and with Avey Tare in Terrestrial Tones. How does working with others differ from working on your own?

Black Dice is a live band. We write as a live band and recordings are more documents of a performance. Dave (Avey Tare) and I haven’t played together for probably ten years. Playing in a band, I’m only responsible for one sound. The hardest part is just figuring out the language between us all, playing alone is less about live concerns. It’s something I do daily in studio practice, but the main difference to me is that alone, I make music, while in a band I play music. Slightly different roles.

You seem to have good relationships with DFA and L.I.E.S. as you’ve released a fair amount on both imprints. How did both relationships come to be? Would you say the material you release on the respective labels intentionally differs in style?

I’ve known the people who run both L.I.E.S. and DFA for almost twenty years. Both relationships started because of Black Dice but became more personal through the years. I’m not catering my music to respective labels, but they both have their own tastes and can take or leave what I offer.

Was there anything that you were focusing on or trying to communicate via Goofballs?

I wanted to focus on bass and drums. Less numbers more grooves. Always a sense of humour in this shit. Avoiding zeitgeists. Trying to make decisions without the pocketbook in mind. Above all I’m soundtracking my days; it’s an audience of one to me!

When and where can we see you playing out next?

Black Dice have shows in September in LA and Chicago, then in a few Euro cities in October. I’ve got nothing solo planned; no offers really.

What’s next for you? 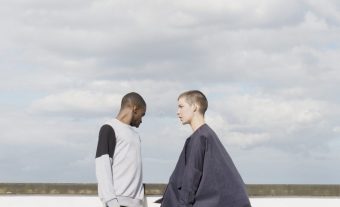 LE SON tell us how living in London has shaped their spacious, glimmering productions and where to find fish & chips so good they're worth fighting for...
Read More