What do you expect from the man who plays everything?

That was the question on my mind after watching Colin Stetson play another phenomenal set at St John’s Bethnal Green last November. It was the third time I’d seen him play in a year, with each gig as mesmerising and astonishing as the last.

There’s a reason why Stetson is probably the most written about artist on this site, and if you watch him play you’ll immediately understand why. His combination of emotional intensity with technical mastery, which sees him produce so many simultaneous musical threads that most people assume he’s using a loop pedal (the dropped jaws when you explain how he’s actually doing it are always fun), is frankly beyond compare, to the point where you wonder where next he could possibly go?

The answer came in an announcement immediately following that gig in Bethnal Green – the next Stetson show would be with his partner, the violinist Sarah Neufeld, to support a new collaborative album by the pair.

In retrospect, the decision was obvious. While Stetson’s ever-evolving technique will no doubt see another one-man auditory assault in future, after three solo albums the idea of seeing how his approach might work (or fail to work) in tandem with another musician was more immediately interesting. That the musician would be Neufeld, a sometime member of Arcade Fire and underrated Montreal outfit The Luyas as well as a solo artist in her own right, seems obvious in retrospect too.

The dangers were also obvious. Stetson’s music is such a powerful, all-encompassing hurricane of sound that many musicians would struggle not to be simply blown away. While the fact Stetson and Neufeld are both long-time collaborators and touring musicians of some repute means they’re hardly new to the idea of working in ensemble, the challenge for a violinist to contend with the sheer volume of Stetson’s saxophone(s) while also offering a complementary yet distinctive voice is not a small one. While Stetson’s technique clearly requires an extraordinary amount of control, the impression it creates is of an elemental, untethered force. Neufeld’s solo work shows a similar fondness for Reichian repetition, but would her bow be able to temper that force without taming it completely?

I heard the album Colin Stetson & Sarah Neufeld have created, Never Were The Way She Was, the same day that I saw them play Islington Assembly Hall last month. After an impeccable warm-up set by mallet-wielding combo Ex-Easter Island Head, there was an overlong gap before the main event that only served to build anticipation to the point where the chances of disappointment were heightened through sheer impatience.

That possibility was forgotten, as it is on the album, within seconds of the opening strains of ‘The Sun Roars into View’. Neufeld’s contributions to Stetson’s minimalist repetitions are subtle and delectable, adding an exquisitely piquant textural tint and, crucially, offering another layer of harmonic possibility. Neufeld’s clear, wordless vocals tie a tender bow around an already extremely passionate piece; as far as I’m aware neither party has spoken about their relationship in interviews, but watching them rhythmically rocking as they conjure almost overwrought sounds makes it hard to shake the crude but undeniable impression that, if they are romantically attached, they probably have really good sex.

Their live set is skilfully sequenced, with both musicians performing solo pieces in the centre (offering the other a well-deserved breather in the process). Stetson’s music is such that it sometimes seems like he is just a conduit for music being blasted through him from some transcendental Elsewhere, and perhaps the most impressive achievement of this collaboration is that this perception remains vivid, only now with two outlets instead of one. It’s interesting that Neufeld’s whalesong vocals are very similar to those Stetson still occasionally produces through a contact microphone on his throat; without watching it’s hard to work out who is producing the vocal melodies at any given point.

The one moment of genuine astonishment during the gig comes during ‘The Rest Of Us’, where Stetson creates a percussive beat so strong that you can’t help but look around for a drum machine. This track is also the most memorable on the album, thudding and thundering across six-and-a-half minutes, with the saxophone sounding like a trapped bear snared in the taut strings of the violin.

Beyond that it’s fair to say the record can’t quite reach the electric levels of potency that the live show offers, but to be honest that’s an impossible ask. As an emotive work of art it’s still unlikely to be bettered this year. Aside from the soaring heights of the aforementioned tracks, the collaboration is noted for a wider dynamic range than either party’s solo work, with several softer, gentler moments pillowing the more fervent sections. The reflective title track is particularly moving, spilling wounded melancholy through simple phrases and showing that the neither musician has to rely on instrumental virtuosity to enrapture their listeners.

So what now for Colin Stetson & Sarah Neufeld? It’s a question that, right now, they need not rush to answer; although we can be sure that we won’t be disappointed when they do. Until then, this album and the accompanying performances are sure to fill your heart, empty it, and repeat the process without a drop of emotional dilution. 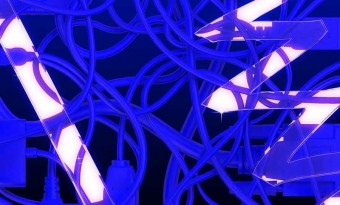