From the titillating sleaziness of Tommy Cash to the monochrome oddities of Mary Ocher, set your square eyes onto eleven of last month’s finest music videos…

Not only the first track to have been featured in MPEGs XI twice with two separate videos, but also the first of our selections to have been publicly denigrated by the president of the USA. Which, to be fair, isn’t so surprising now we’re in the age of Trump.

The controversy in this case stems from a scene towards the end, when guest star Snoop Dogg shoots a clown dressed as Trump (who still manages to look less clownish than the real thing). This was enough for the Prez to tweet: ‘Can you imagine what the outcry would be if @SnoopDogg, failing career and all, had aimed and fired the gun at President Obama? Jail time!’. The ‘gun’ in question is a kid’s clown gun. You know, one with a little flag saying ‘BANG!’ that pops out the end.

The controversy has helped the video attract over eight million views on YouTube to date. BadBadNotGood’s previous video for this track managed just over 200k. Bearing this in mind, can we assume Trump has some sort of stake in the Canadian jazz-rap trio? It’s the only explanation that makes sense…

The barmy, brain-based video for Paul White and Danny Brown’s ‘Accelerator’ would have made last month’s MPEGs XI, but an OpenOffice cock-up meant the shortlist got corrupted. Sorry.

Luckily Mr. Brown followed it up with another belter in the form of ‘Ain’t It Funny’. Directed by Jonah Hill, it’s a twisted take on nineties American sitcoms that raises questions about how society often turns damaged individuals into domestic entertainment, hammering its point home so hard that, as with Brown’s equally tormented Atrocity Exhibition LP, you wonder whether it’s a genuine cry for help…

Maybe not one of his best tracks, but aesthetically ‘Humble’ is one hell of a way to reintroduce yourself. Appearing as both Jesus and the Pope in the same video? John Lennon would be impressed. You know a video is iconic when it immediately finds itself being parodied, and the bit with all the baldies nodding their heads reminds me of this great video by DELS.

I have no idea what’s going on in this oddly euphoric bit of animated madness, but its ballooning beauty is the perfect foil for the ticklish electronica of Japanese artist KOM_I. Likely to make you feel like you’ve done a few balloons yourself…

Mary Ocher – To The Light (feat. Your Government)

I missed Mary Ocher when she performed a reportedly excellent show in London recently, but at least I can watch this video whenever I like. Director Robin Lochmann conjures something akin to a (more) twisted version of Michael Haneke’s The White Ribbon, with the monochrome template and malevolent masks creating an increasingly eerie atmosphere.

The best depiction of the Grim Reaper since Bill & Ted’s Bogus Journey, ‘Show Yourself’ stars Death himself as a down-on-his-luck soul reaver with a demanding boss and an unsympathetic spouse. Given an assignment to slay the members of Mastodon or face the sack, poor old Death tries his very best, with mixed results…

If the kodama spirits from Princess Mononoke stumbled into the ‘pink elephants’ scene from Dumbo, it might look something like this. Assuming BJ The Chicago Kid happened to be lurking in the background.

Most calls for music video extras are for people to pretend to be in the crowd at a gig or a club. The request for Napoleon IIIrd’s ‘The Scrape’ must have been far more intriguing: ‘Looking for people to smash the shit out of the everyday objects that most frustrate you, apply within’. Hell, people would probably pay for the cathartic privilege. The carnage is slowed down to match the funereal pace of the track, before everything climaxes with a big old ritualistic bonfire. Smashing.

Atlanta rapper Nessly is presumably a fan of Adult Swim classics such as Superjail and Rick & Morty, at least if this cartoon caper is anything to go by. Merrily piloting his $tar$hip through the solar system, it isn’t long before Nessly finds himself the subject of some unwanted alien attention…

It’s fair to say ‘Somatic’ boasts the simplest concept, the lowest budget and the stickiest substances of this month’s selections. It’s also possibly the most suited to its soundtrack, with the sickly skin-on-skin imagery complementing the harsh queasiness of Pharmakon’s ear-splitting sounds. 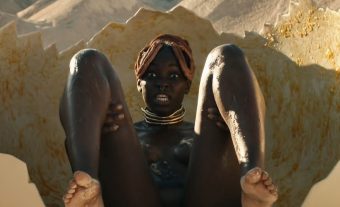 From Residente's eye-catching abnormalities to Max Cooper's mind-bending experiments, enjoy an eclectic and explicit collection of music videos from the turn of the year...
Read More