I am a relative newcomer to the music of Emma Ruth Rundle. Having seen her name on tour posters alongside bands with the heft of Deafheaven and Inter Arma, I was always intrigued. After finally pulling the trigger on recent sophomore effort Marked for Death, there was an element of surprise to being met with eight melancholic and beautifully restrained folk songs, at least when considering her choice of tour-mates.

It was, however, immediately obvious why Rundle has been keeping such heavy company in recent times. The record is not heavy in the traditional down-tuned sense but there is an indisputable weight to the depth of emotion and delivery, and it is this that affords Rundle the ability to sit comfortably on heavier bills. Tonight sees her name in the largest point size in a headline slot at one of London’s most prestigious smaller venues, The Lexington.

This evening’s support is supplied by British doom trio Darkher. Built on the foundation of Jayn H. Wissenberg’s flawless haunted vocal, the band work their way through the highlights of last years Realms. Opener ‘Hollow Veil’ bears a striking resemblance to Godspeed You! Black Emperor’s ‘East Hastings’, only more concise and with a heavier hammer-drop.

The set’s highlight arrives in the form of aching slow-burner ‘Moths’. Dressed all in black, and with her long auburn hair the only colour to puncture the gloom, Jayn H. Wissenberg’s articulate finger-picked refrain underpins a truly breathtaking vocal delivery. With the tempo set to doom and not a dud note in sight, the audience is genuinely gripped by such hushed tails of impending doom: ‘They warned of dark clouds, gathering overhead’. I had not heard of Darkher before tonight but in performing their shadowy slow-builds with such impressive craft they have gained a new fan.

Emma Ruth Rundle takes to the stage alone and proceeds to start her set with the location-appropriate song ‘London’. Thickening her sound with swells of delay it becomes clear that Rundle is completely at ease on a stage this size. As she stamps her foot to inject momentum her crowd-commanding charisma is palpable and the song receives a huge cheer. Next up is ‘Arms I Know So Well’ from her outstanding debut. Whittling her vocal between soaring accentuation and aching murmur, I am reminded of her label-mates Russian Circles’ softer work.

Despite having a folk-sensibility at its core, recent long-player Marked for Death is delivered via a full band and layers of delay-tinged crescendo. With the solo introduction now over, Rundle clearly intends to bring every rising peak to the stage tonight and is subsequently joined by her band and tour-mate Jaye Jayle on second guitar. ‘Run Forever’ follows and the added weight proves invaluable on The Lexington’s superb sound-system.

There is always something engagingly primal about a musician really enjoying themselves. So, as the band run through the Jose Gonzales inflected ‘Hand of God’, the musical chemistry between Rundle and Jaye Jayle is genuinely infectious. The song’s heights prove considerably heavier on this live stage and as the band draws it to a close the two guitarists exchange a knowing look of acknowledgement. The audience subsequently roars in agreement.

The world of underground music can often be a small one and it was only after conducting my research for this review that I discovered Rundle is an integral part of L.A post-rock band Red Sparrowes. Their 2010 long-player The Fear Is Excruciating, but Therein Lies the Answer is an exercise in colossal guitar-strata. With the benefit of hindsight, I am not at all surprised by the ease with which Rundle executed her delay-swell guitar solo in ‘Marked for Death’. As the melodic runs shatter and stall through each other it is evident that Rundle has a lot more than folky finger-picking in her audio tool-box.

As the band leaves the stage, Emma Ruth Rundle closes out the set with a delay-soaked solo rendition of ‘Heaven’. The next eight minutes serve as a testament to her experience as a touring musician and the resilience and optimism that permeates Marked for Death. As she begins the opening picked arpeggios, the guitar is perceptibly out-of-tune. In situations like these you are faced with two options, stop the performance and start again or plough on and save it through force of will. Rundle chooses the latter, and while the detuned guitar is ever-present, her courage in the face of adversity earns her a huge cheer as the last chords ring out.

Now clearly aware that the previous song has faltered, a visibly determined Rundle proceeds to bring down the curtain with a spectacular version of the grunge-inflected ’Real Big Sky’. As she sings ‘I won’t ever change my mind, I can’t wait to kiss the face of the big sky’, the command in her voice confirms what Deafheaven, Inter Arma and Russian Circles already know: Emma Ruth Rundle is a charismatic and powerful performer who transforms reflective indie-folk songs into poignant ethereal juggernauts.

Cigarettes After Sex light up KOKO 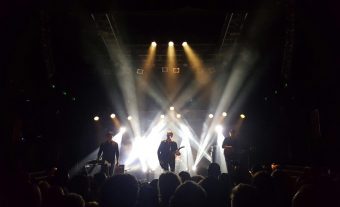 El Paso dream-poppers Cigarettes After Sex manage to achieve the impossible - they distract Alex Platt from the chattering crowd around him. Well, almost...
Read More