The tranquil folktronica (are we still allowed to use that term?) of Astronauts, aka Dan Carney, first came to our attention a year ago after encountering his bewitching single ‘In My Direction’ and its equally engrossing video. We’re delighted to inform you that his latest track ‘Civil Engineer’ is even better, and to host the premiere of its similarly excellent video on The Monitors today.

The track bubbles along in typically hypnotic Astronauts style, with a pleasingly bleepy loop threading together Carney’s soft melodies and crisp acoustic guitar. The press release states that it’s “possibly one of the finest songs about civic planning ever written”, but there isn’t any ‘possibly’ about it to be honest.

The video meanwhile, created by Armenian film company Mañana Films, is a moody yet groovy piece featuring eighties aerobics and lots of milk, and proves a perfect foil to Astronauts’ swirling musical atmosphere. Mushegh Baghdasaryan from Mañana Films explains the method behind the video:

“We wanted to place the action and characters in a USSR-themed setting and wanted the video to have this simple cartoonish look. Therefore we decided to keep the camera and focus static throughout the video and to tell the story through lights and staging only.”

“This is the second video they’ve made for me,” Dan Carney enthuses (the first being for the aforementioned ‘In My Direction’). “I think they’re brilliant. Simple ideas beautifully done which look amazing, videos which genuinely add something to the songs. It’s a pleasure and a privilege to know them.”

‘Civil Engineer’ by Astronauts is released next Friday, and comes with two excellent remixes courtesy of Bit Cloudy and Kieran Mahon. It will be followed in April by the release of the second Astronauts album, End Codes, the follow-up to his 2014 debut Hollow Ponds. 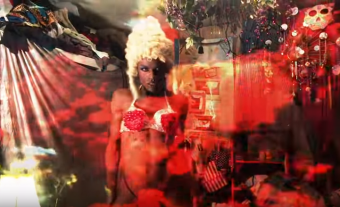 The new video from RR Perkins features all the woozy, multi-layered DIY magic of his music; with a little added drag queen action...
Read More