As ATP sign off with a double header of weekenders to put their UK holiday camps to bed, I was one of the first people to confirm tickets when the line up was announced for Weekend One. ATP V Primavera Sound, the highly respected Barcelona festival, was a sure-fire hit to be a winner. The initial acts announced were stellar: Godspeed You! Black Emperor, Television, Dinosaur Jr., múm, Low, Tortoise. Texts messages were sent, friends confirmed, tickets booked and I was in!

Cue excitement? Unfortunately as the weeks went on, after tickets had sold out (quite quickly, unsurprisingly) and additions to the line up were made, it was clear to see that ATP had decided a sold-out event didn’t need any more attention, or ‘stellar’ acts on the bill – especially when Weekend Two (curated by Loop) – hadn’t sold out. Bands such as Shellac and Slint joined the bill for the latter, and where Weekend Two had Mogwai signing off, Weekend One had, er, Los Planetas. Disappointing.

Still, as much as I wanted to defer my tickets to the second weekend (as a number of people were doing judging by the message boards and social media) I couldn’t let my friend down who booked the tickets. Also, I simply couldn’t afford Weekend Two tickets, as unfortunately I’m not made of money (although I am working on it). I bit the bullet and resolved to enjoy my last ever ATP.

How was it? Well… 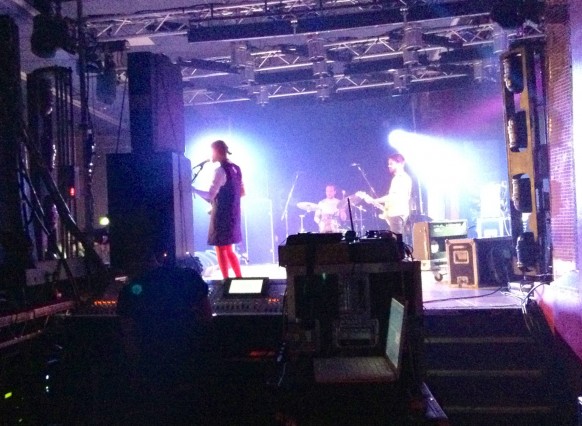 The Friday was enjoyable enough, although far too sparse in terms of acts playing. Monitors favourite Scout Niblett kicked things off on the Main Stage. She provided an apt set to open proceedings, with her harrowing vocals and bluesy guitars and drums pinning everything together (despite people chatting all the way through it).

múm played an excellent set, and a great bonus was the newly rejoined Gyda providing her strained vocals over a selection of the band’s back catalogue, from Go Go Smear the Poison Ivy to Finally We Are No One (No ‘Green Grass of Tunnel’ though, unfortunately). They proved they really are one of the true masters of delicate, twee electronica. It must be the melodica. 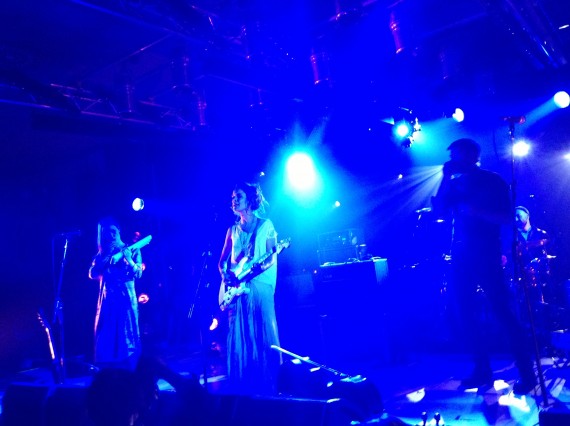 Sonic Youth’s Lee Ranaldo and The Dust brought a decent set but nothing to capture the imagination, whereas Blanck Mass were responsible for a Jekyll and Hyde performance, the first half more subdued and ambient (bummer) before a more thumping second half (party bringer).

To be honest, it was all about Low on the first day, probably my favourite band from the last 15 years, constantly moving forward musically while consistently maintaining a high standard of quality. They played for an hour-and-a-half, and I wish they’d played for another. Performing songs from The Invisible Way, they offered beautiful versions of ‘Just Make it Stop’, ‘Clarence White’, ‘Waiting’, and ‘Plastic Cup’. It really doesn’t make sense to me how this band aren’t more well known. ‘Sunflower’ sounded majestic and ‘Pissing’ was played with an underlying sinister vibe which boiled over into a truly frightening climax. As Alan Sparhawk leaves the stage, he makes sure we get his message: “We’ve only got one shot at [life]”. Hear hear. 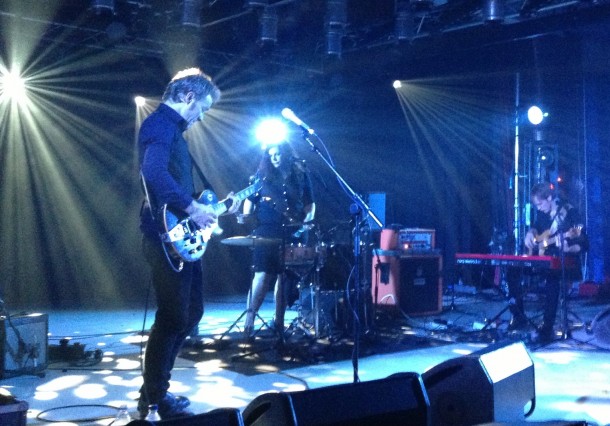 Saturday was the big one. How could it not be? The line up was possibly one of the strongest at any festival, ever. Period. There was no chance this day wouldn’t get the pulse racing… yet it fizzled rather than exploded.

The schedulers must take note. Whose bright idea was it to have Les Savy Fav and Har Mar Superstar play so early? Party bands like that should be saved for last. And surely Godspeed You! Black Emperor would’ve been better playing either as openers (a slot which they definitely prefer) or super late, instead of sandwiched between LSF and Dinosaur Jr.? Wolf Eyes at 5.30pm? Puh-lease!

Either way, the opening act for the day, Tortoise, proved to be in their usual incredible form. Opening with ‘Eros’ from TNT, they glided through one of the best sets of the festival, playing a wonderful blend of free-form jazz over tightly structured foundations, all orchestrated by drummer/keyboardist John McIntyre. 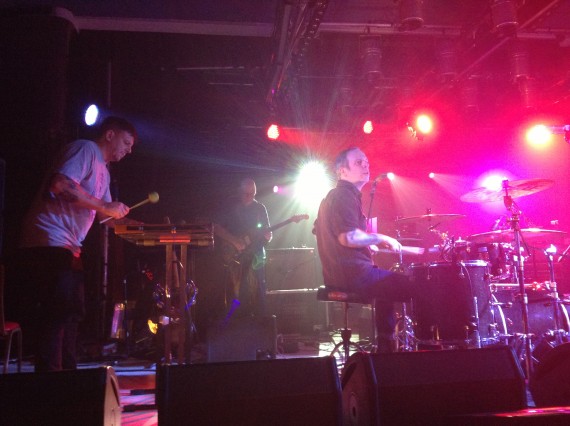 Thurston Moore’s Chelsea Light Moving (pictured at the top of the page) cherry-picked all the best elements of Sonic Youth (the melodic fuzz parts), before legendary and influential rockers Television performed Marquee Moon. Grown men cried. Literally, I stood next to two of them who bawled their eyes out. The set was nice enough, and seriously, Interpol should be thanking this band every day for making a career from their sound. The songs were played professionally and without any trouble, sounding like they do on the album. Which is pretty much what everyone wanted, I guess.

Downstairs I did catch some Har Mar and Wolf Eyes but, as I said, I simply wasn’t in the mood for them. Wrong time, wrong place. Les Savy Fav brought the good time vibes, but again it felt too early. Too sober. They unleashed the hits such as ‘The Equestrian’ and ‘Patty Lee’, which should’ve blown the roof off, and singer Tim Harrington did his best to get the crowd up for it, getting into the crowd, ripping off his jeans, scrawling black marker on everything and everyone. Yet although the front portion of the crowd moshed away, the remaining 90% of people stood timidly and statuesque. Shame. The highlight was getting a stage light into the crowd, like a flash bulb during an interrogation.

Next up it was Godspeed You! Black Emperor, and after a prolonged drone intro to ‘Mladic’, they performed a near-perfect rendition of ‘Lift Your Skinny Fists’, with its ‘Swing Low, Sweet Chariot’ crescendo. I know the word ‘epic’ gets bandied around all too freely, but this really was spine-tingling. The new songs sounded good too. 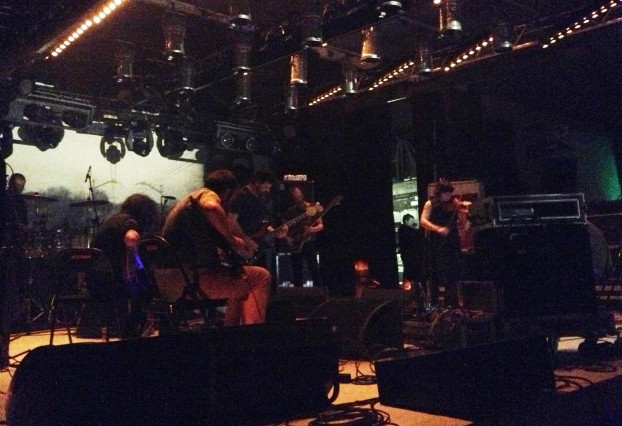 Dinosaur JR followed, but again, although they were solid enough, they shouldn’t have been headlining. To my knowledge, they were actually bumped up to headline status as the bill filled up and the quality of bands was diluted. Quite cheeky of ATP advertising them on their promotional posters as lower down the bill, and then letting them headline the Saturday night. Anyway, the evening ended with our group checking out DJ Fra Soler, who played some amazing ambient techno beats, before we stumbled through chalet parties to the (freezing) beach at 3am. The things I will miss most about ATP are the random chalet parties and the beach.

To Sunday. I’m going to stick my neck out and say this was, without doubt, the worst day at an ATP weekender. Ever. The main stage was filled with some pretty sub-standard Spanish bands, although Headbirds again suffered the scheduler’s curse and should’ve been on much later with some pretty damn good beats. Refree played their distinctive brand of MOR rock to a less-than-half-full crowd. Embarrassingly, headliners Los Planetas apparently played to 200 people by all accounts. I wouldn’t know. I had no desire to see them after hearing their stuff on Spotify.

However, Zyna Hel will go down as one of the WORST things I have ever seen, not only at ATP, but anywhere. She was truly terrible. The songs were bland, the performance was hilarious; like KT Tunstall if she wanted to be Kate Bush. Zyna Hel seemed to think all she had to do was doll up and keep touching her chest area, and that should get her by. To be fair, a lot of the of ‘soap dodgers’ (Barry Hogan’s lovely term for ATP goers) were loving it. Perhaps they’d never seen breasts in real life.

Adam Gnade, clearly intoxicated, slurred through a spoken word set backed by members of Youthmovies. Lots of in-jokes and drunken mutters, but he clearly got rattled when a drunken dude at the front kept blowing a party-horn which “harshed his mellow”. Dull as dull can be. Forest Swords wasn’t bad; however, Matthew Barnes and his band came on stage around 20 minutes late, and once one song was heard, you’ve probably heard them all. Boring.

Thank the stars for Beak> then. They salvaged any remaining enthusiasm with a killer set. Sure they might sound repetitive, but it was nice to see a band play with some edge and drive, the hypnotic synths and basslines all pushed forward by Geoff Barrow’s drumming. Fantastic, and had the place moving. Finally! Afterwards we ventured downstairs to see Declan Allen DJ for the 7th time of the weekend (‘cos he clearly hadn’t DJ’d enough) but after a few songs decided to head back to the chalet and eat garlic bread and drink till the wee hours.

ATP, you’ve been fun, but less for the music and more for the people. The friends. The chalet parties. The beach. ATP is simply the forum and platform for this to occur. Unfortunately, the people behind the event ran it like a bunch of amateurs. This weekend was proof of that. The scheduling, the bands playing; they simply stopped caring about this weekend and focused on Weekend Two instead, as that needed the ticket sales. Poor form.

It’s probably a good thing these will be the last UK ATP festivals, judging by Barry Hogan’s bitter rant in the programme at the people who questioned their past misdemeanours. I’m sure he doesn’t even want to do it any more. Perhaps someone else will take this “unique brand” (yes, “unique” – I’m sure it was Belle & Sebastian’s idea, non?) and do it properly. ATP – RIP. 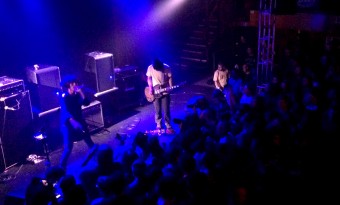 Whether you can stand their abrasive thrash or not, the Japanese noiseniks know how to put on a good show...
Read More