Our first singles round-up of the year following a server transplant celebrates the welcome return of Colin Stetson and Sega Bodega, plus fresh sounds from Celeste, Opal Blue and more…

There’s nothing sour about Celeste’s ‘Milk & Honey’, with the Brighton resident serving up a suitably viscous bit of languid soul. A deceptively smart arrangement gives plenty of depth to the track, even if the outro could’ve been snipped thirty seconds earlier.

Colin Stetson’s ‘re-imagining’ of Gorecki’s 3rd Symphony won him plenty of plaudits last year, but frankly it’s far more exciting to hear him back producing original work. And what work. The spiralling, transcendental magnificence of ‘Spindrift’ is on a par with his finest productions, which is to say above three rungs up from everyone else’s. In a politically sour era, watching one of the best musicians of our times going from strength to strength is a singular pleasure that provides escapism of the most inspirational and all-consuming kind.

As solid an acid-tinged groove as you’d expect from a man as skilled as Ghost Culture, but lacking the electro-pop songcraft that made his debut album such a delight. Wake me up when he’s found his voice again.

To be honest, I’ve never got the fuss about Jens Lekman. Having listened to ‘Evening Prayer’, woe betide anyone who tries to force the fuss upon me. Winsome, cloying and irritatingly smug, I was praying for it to end.

Not for the first time recently, the best hip-hop track I’ve heard all week isn’t from the USA (or the West for that matter). This creeping, muscular collaboration between some of South Africa’s biggest rappers owns the edge that most Yank rappers are really struggling to reach these days.

All of Mark Lanegan’s songs could be considered nocturnes really, in the sense that they’re best consumed at night. Chilly, dark and gruffly soulful, ‘Nocturne’ isn’t exactly a departure for Lanegan but it gets anticipation going for his new album Gargoyle, set to be unveiled at the end of April.

Adam Scrimshire and Dave Koor combine to form one Modified Man. A Modified Man with an impressive collection of synths, no less. ‘Thorns’ takes a while to get going, gently looping several undulating ribbons of sound, before the beat kicks in and sends it soaring.

The most expansive track to date from enigmatic London trio Opal Blue. A gorgeous bit of hang is suspended amidst gentle edits and subtle beats, resulting in something that would fit well next to the new Bonobo material in any early 2017 playlists.

It’s hard to think of a more fitting soundtrack to our times than a thrash metal track entitled ‘Nightmare Logic’. Power Trip pull no punches on this formidable neck-loosener, which launches a volley of infectious rage at those who deserve it. Listen to this before you read the paper or switch on the news, it’ll help.

The first singles from PVT’s New Spirit album (out tomorrow) didn’t really do much for me, but the blunt poetry of the title track is on another level. Rhythmically seductive and sonically satisfying, this is PVT at their most starkly economical. It’s not the best track on their new record (that would be ‘Murder Mall’) but it’s not far off.

Russ feat. Rexx Life Raj – Take It All In

It’s all about the xylophone riff on this. The smoothest of smooth production turns ‘Take It All In’ into a track that begs to be replayed.

It’s been a few years since I last heard anything from Sega Bodega, but nothing could’ve prepared me for this. A razor-sharp beat with memorable vocals from a clearly ill (in every sense) Shygirl, ‘CC’ is a cold, captivating banger. Expect big things from his new EP out next week. 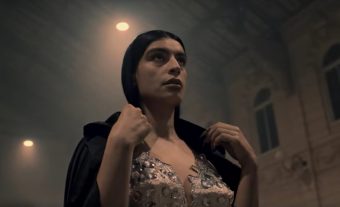 From the resurrection of Angel Haze to the bare humanity of Sevdaliza, this week's singles column shows there's life in 2016 yet...
Read More