From the resurrection of Angel Haze to the bare humanity of Sevdaliza, this week’s Single-Minded shows there’s life in 2016 yet…

A few years ago Angel Haze seemed certain to become the next big thing in hip-hop. She seemed to have everything – a sharp, syllable-slicing tongue, a moving backstory and, most importantly, tunes like ‘Jungle Fever’ and ‘Werkin’ Girls’. Yet somehow her debut album Dirty Gold failed to deliver on that promise, too unfocused and confused to deliver the statements she clearly has the talent to make.

It seems Angel Haze is potentially in agreement. ‘Resurrection’ starts with the line, ‘2014, the year I died…’ (which probably says all you need to know about last year’s under-the-radar release Back To The Woods) before declaring this to be the year of her resurrection. Angel Haze’s acidic delivery, combined with the tension between the strings and the synths, suggests she’s not bluffing this time either. Hopefully that’s the case; her ‘Resurrection’ makes a nice change from artists choosing 2016 as a good time to pop their clogs…

What was that other thing that was all the rage back when Angel Haze first appeared? Chillsplash? Lightwave? Either way, it’s not likely to follow her lead anytime soon, and this soothing track by Montréal band Bodywash almost makes me feel sad about that. Then I remember the last Washed Out album, and notice the term ‘#creampop’ on SoundCloud, and come to my senses. Nice tune though.

Apparently this was put out for sale accidentally by a record shop in Toronto, much to Hyperdub’s annoyance. Frankly it’s hard to shake the feeling they might have sent it out by accident themselves, as Burial’s latest release feels strangely unfinished. The usual texture and ambience is all there and there’s a fluid progression to it, but ultimately it doesn’t seem to lead anywhere. Forgettable.

From SoundCloud: “Progressive shoegazing? Music of the outer spheres? An irrevocably mentally unstable Gentle Giant and a severely alcoholic Todd Rundgren having a love child which, after being adopted to Russia, finds himself performing a rock opera in the Ural Mountains? It is typical of the human mind to try and classify things, but when confronted with Kairon; IRSE!, many are at a loss for words.”

Obviously not the person who writes Kairon; IRSE!’s promotional material. Yet while the commanding description above also suggests music that could potentially be completely fucking awful, there’s no denying that ‘Starik’ is a galactic riot. It manages to whoosh through metal, jazz-punk and bucolic folk in the first couple of minutes, and then basically does it all over again. God knows what to expect from their forthcoming second album Ruination, but I suspect the title is probably a good indicator of the state it’ll leave your brain in.

‘Creola’ actually sounds relatively straightforward after the madness of ‘Starik’ but then so would pretty much anything. The Meltybrains? mixture of stunning drumming and overloaded arrangement is diverting enough though, almost distracting you from the fact that at times it sounds like a post-rock version of ‘Still D.R.E.’ (no bad thing). It’s also a little remeniscent of Three Trapped Tigers, whose drummer’s solo project knocked our socks off this week…

All the people disowning Kate Bush after her one-woman Theresa May rally this week are presumably on the lookout for a replacement. They could do far worse than London trio Peluché, whose lilting ‘Muchachito’ sounds a bit like KB number put through a gentle Latin filter.

The beat’s nothing to write home about, and it has no chance of containing Princess Nokia’s pugnacious delivery. Much like previous single ‘Tomboy’, the shrill belligerence of ‘Kitana’ manages to please and irritate in equal measure, so she must be doing something right.

Tehran-born Sevdaliza is set to drop a debut album in 2017, and the signs from ‘Human’ are very promising indeed. Sevdaliza combines the slick, stark style of fka Twigs with the affecting moodiness of Portishead, and when combined with the video’s studied dissection of the male gaze, it makes for a pretty hard to ignore package. (I had to Google the quote that accompanies it on YouTube: ‘the basic human need to be watched was once satisfied by god’. Was expecting it to be from some clever theological novel, turns out it’s from a first-person shoot-em-up called Deus Ex. I’ve never felt so out of touch.)

OK, so it’s impossible to ignore how much this sounds like Amy Winehouse. Still, it’s not like Amy’s sound was exactly original. Snoh Aalegra’s voice can’t quite reach the Winehouse standard (although there’s an intriguing touch of Michael Jackson at some points) but ‘Feels’ is a decent song and she does it justice. Not sure about that ending though.

I know nothing about The Submissives, although I seem to be following them on Bandcamp for some reason. I’m also pretty sure I’ve never heard the finished version of anything demoed here. Frankly I’m not sure I want to, as it’d be near impossible to beat the ramshackle, lofi loveliness of this. Cheers mysterious Bandcamp email.

Would Ought still sound like The Fall without frontman Tim Darcy? ‘Tall Glass of Water’ half-answers the question, as Darcy’s enunciation gives what is otherwise not a particularly Fall-like track that distinctive Mark E. Smith flavour (eurgh, just imagine what a ‘distinctive Mark E. Smith flavour’ would actually taste like. Worst vape flavour ever). There’s a touch of the Jonathan Richmans to ‘Tall Glass of Water’ too, although on this first showing Ought’s more rollicking style seems better suited to Darcy’s vocal disposition.

Uniform seem to be making a late bid to throw 2016’s noisiest and most damaging musical punch, and ‘Tabloid’ is another pulverising track with a thumping, Lard-like pulse (‘Lard-like’ as in like the band Lard, I’m not suggesting they’re fat). Their Wake in Fright album comes out on Sacred Bones in January, which is a good cue to remind you that the label is donating all the money they make via Bandcamp to the campaign defending Standing Rock, until December 4th. You can contribute to both the cause and your music collection here. 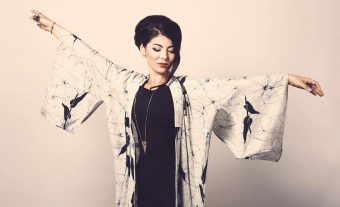 From ALYUSHA's angular electronics to the emergence of a Cyrus sister who actually isn't bad, this week's singles round-up is full of surprises...
Read More