I should admit straight away that I’d never heard of Ian Stonehouse or his noise-improv group, Rutger Hauser, before falling into Voyage en Kaleidescope. Photos of Ian playing live capture a somewhat unimposing man, sitting thoughtfully at a desk full of analogue equipment – tape machines, several old ‘suitcase’ style portable record players, what I’m assuming are some kind of modular synths, even a typewriter or two – in a cheerful pattern shirt with hugely oversized earphones snug on his head.

A friend once described an argument she’d had with her boyfriend about noise music. Surely, even once you get past the idea of noise music, a contradiction in terms if ever there was one, how can you even tell if it’s good? To counter – you just know. You can just sense it and it taps straight into a quiet personal space.

Voyage en Kaleidescope’s take on noise is joyous and anarchic, a distorted lens closely focussed on a small palate of decaying vocal samples, gorgeous static fuzz and the occasional high pitched dentist drill (just in case we were all getting a little too bit comfortable, just in case we all forget this is noise after all). The album’s largely comprised of odd looped vocal samples, mixing of said samples with analogue distortion, krautrock-ish repetitive guitar looping, more samples and more and more distortion. This (I’d like to call it noise pop) is fun, funny and full of possibility.

‘Vitriol’ opens us up with a soft rain patter fuzz which shifts to soft sweet analogue radio hiss. A children’s music box motif in a ticking loop backs a chant of “Oh wretched man that I am / Thor shall deliver me from the body of this death”. Much of the album is in the same kind of vibe with variation on tones: aggressive in ‘Annihilation of Ogres’, ‘The Three’ focussed on a sinister looping “I’d like to show you.. a book of blood”, ‘Sunday 12.27am’ playing out a saucy voicemail from a late night party.

The standout tracks are ‘Dog Morrow’ and ‘Solve et Coagula’. ‘Dog Morrow’ builds on a drum and vocal loop muttering ‘I want you’, slowly adding strings and peppering with talk about dogs. It’s somewhat effervescent while drawing on a hypnagogic pop sensibility. ‘Sole et Coagula’, on the other had, is – surprise! – Stonehouse’s take on drum and bass through his own method.

To finish us off, ‘Erasure of Birds’ closes out with birdsong becoming more and more indistinct in a haze of analogue distortion. It’s hard to see exactly where Ian Stonehouse’s fascinating, fun and heartwarming analogue patchwork could go next after this but I am hugely excited at the possibilities.

Ravioli Me Away - Living is a Myth 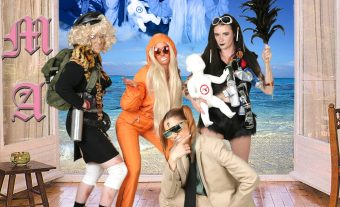 Brioche or muffin? Street art or latte art? Or perhaps you'd prefer the righteous new Ravioli Me Away album? Yes, of course you would...
Read More