Yoshimio is the Siouxsie Sioux of Japanoise, a pioneering musician and frontwoman who has worked with Boredoms, Free Kitten and Yoshimi & Yuka. Yoshimi returns this year with genre-defying Japanese four-piece OOIOO’s jarring ninth record, Gamel.

A disorientating mix of Far Eastern tonality & instrumentation and electric Japanoise mayhem, Gamel is fucking insane even by OOIOO’s standards. Yoshimi P-We guested on The Flaming Lips’ seminal concept album Yoshimi Battles The Pink Robots, and once again she makes barmy Wayne Coyne look as tame as Mary Whitehouse with this latest release. Macabre and hilarious, Gamel is based around gamelan instrumentation and notation, the droning atonal national music of Indonesia which has become internationally popular with experimental musicians. Electric guitars flirt with chiming metallophones and discordant female harmonies reminiscent of The Slits in a bizarre and imaginative amalgamation of ironic scatterbrain aesthetics.

This isn’t easy listening. It is spiky, coarse and charmingly unbalanced mood disorder pop; OOIOO inflict intense discomfort, offering relief when it all gets too much and you start clawing for a way out of the atonal centrifuge. At times, the sheer insanity and silliness of this record can get too much, especially during the 7 minute night terror ‘Shizuku Gunung Agung’. The annoying ‘Gamel Udahah’ begins as a promising loop and swiftly descends into unsettling chaos after the 1 minute mark. Yoshimi and chums torture the listener like children throwing shit at a caged monkey in this exceptionally weird, inventive and exciting July release.

If you can stick it out through this album’s more nauseating moments, you will find imaginative gems the likes of which you have never heard and snatches of genius amongst the cacophony of eardrum abuse. The primal vocal breakdown of ‘Gamel Ninna Yama’ sounds like The Chantels during benzo withdrawal, and the joyous ‘Jesso Testa’ thrills and confounds in equal measure. The shrieking four-piece combine like a wailing Yoko Ono multiplied by 666 on the nightmarish ‘Pebarongan’, where abrasive single-note electric guitar stabs pervade the hallucinogenic gamelan backing. The cheerily discordant ‘Atatawa’ is the most accessible song on the record, and contains the most unexpectedly captivating tempo break of the year, while Björky closer ‘Gamel Ulda’ closes shop in suitably wonky fashion.

OOIOO have the power to disturb and disorientate as well as thrill and excite, often all at the same time. Listening to Gamel for the first time is like being spiked with tranquilizers, hooded with an empty egg noodle sack and spun round in a circle for an hour. Sickening, imaginative and emotionally stimulating, there is good plain sense to be unearthed in the musical word-salad from Yoshimi P-We’s most fruitful venture so far. For all Gamel’s unintelligible moments, there are lucid echoes of the lush, atmospheric beauty of artists like Salyu, the droning ambient electronica of Eriko Toyoda/So and the cut-and-paste cultural montage style of The Go Team! and early Cornershop.

Nightmarish, annoying, wacky and inspiring, Gamel tries to shock, surprise and excite, and for effort and execution, OOIOO get an A*.

Morrissey - World Peace is None of Your Business 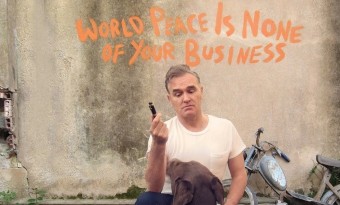 A misjudged reshuffle in Morrissey's musical cabinet doesn't prevent his latest record being the best he's released for a decade...
Read More