You know how everyone who saw the early Velvet Underground and Sex Pistols gigs supposedly went out and formed a band? Well, I took a friend who’d just moved back to London to see Ravioli Me Away play at 93 Feet East last year, and within weeks we were ensconced in a grubby practice room, messing around with Casio keyboards and greasy ride cymbals. Forget the fact that we’ve since disbanded with just one gig and four probably-never-to-be-released tracks to show for it; seeing Ravioli Me Away poured a bit of petrol on our creative spark, even if the end result was inevitably ashen.

Obviously that’s not to say that Ravioli Me Away are the modern equivalent of the Velvets or Pistols, even if they share a similar rough and ready approach. However, they manage to do something that arguably neither of those bands ever did, which is make being in a band look both easy and fun. That’s what helped make 2014’s The Inevitable Album such a spirited, manic affair, and that sense of focused chaos continues in the follow-up, Living is a Myth.

The cover suggests that the trio have now expanded into a four-piece, although the artwork is still reassuringly garish (the inclusion of a free poster also providing an opportunity to challenge the tolerance of your partner/flatmate/cellmate). The tessellating WhatsApp messages of the inner gatefold take the visual disturbance even further, like a twisted chat mandelbrot (‘Oh god / Is this album art? / If it is I like it’). 8% of phone battery well spent.

The record itself, which comes in a challenging shade of fake tan orange, opens to cheers, thumps and yelps about polyester suits. The brassy keyboards might border on irritating were it not for the madcap Shonen Knife meets Andreas Dorau charm. However, it’s the spiralling mantra of ‘Power in Mind’ that plunges the album deep into your skull for the first time. Whether the titular power is a form of madness or enlightenment seems up for debate, but the swirling structure and insistent keyboards have a hypnotic quality that nicely parries the percussive jabs.

‘Holy Eyes’ is a sort of nursery rhyme gone sour, an anarchic sing-song that brings to mind ‘Kidnap the Sandy Claws’ from The Nightmare Before Christmas of all things. It seems like some deity has been taken hostage in the lyrics too: “I’ve had faith for all these years and now I want some proof” is the demand. Fair enough really.

‘Living is a Myth’ seems to abandon that faith completely in favour of a warping zen: ‘I’m nostalgic for now / I travelled far ahead / I’m looking back with great affection – at this moment”. The synths spark and smoulder over a brilliant bassline, dealt out with the measured aggression of a casino croupier moodily awaiting the end of their shift.

‘Temporary Lifestyle’ is one of the album’s highlights, a sardonic butchering of middle class mores, sprayed with cheap sitar. A list of metropolitan concerns – ‘Brioche or muffin? / Street art or latte art?’ – is recited deadpan, and may inspire you to hurl the next quirky coffeeshop sideboard you see through the nearest tastefully stencilled window. There’s room for plenty more songs like this in modern society, and Ravioli Me Away’s ‘Temporary Lifestyle’ joins Dog Chocolate’s ‘I Don’t Know’ and Idles’ ‘Well Done’ among the best put out this year.

‘Hot Heavy Horses’ – now there’s a phrase for Theresa May to ponder while browsing your internet history, especially when combined with lyrics about them ‘forcing you to come’. Despite the fact it’s worryingly reminiscent of a book of erotic horse literature I once found in a second-hand bookshop (The Stallion Rides, for anyone who’s interested), in a weird way the floaty keys make it possibly the only track on Living is a Myth that could be described as ‘nice’. Nicer than ‘No Communicardo’ anyway, which tugs at your sleeve insistently, spouting semi-garbled backing vocals that mock the plea for attention in the main melody.

Possessions and identity are equally insecure in stomping closer ‘Bijoux Baby’. Strident yet scrambled, repetitive yet concise, it seems to sum up the album as a whole. The only real criticism is that Living is a Myth could do with more of the spoken word passages that provided the band’s previous record with its most revealing moments. While there is a recital of some generic advice about anxiety on ‘Ultimate Destruction’, the unsettling result is likely to have you reaching for the lorazepam – although perhaps that’s the intended effect. Still, singer Sian Dorrer’s knack for melody, showcased spectacularly on her other project this year, the magnificent Emotional, is still in hook-laden evidence.

The fake ‘Ruff Traid’ sticker on the cover of Living is a Myth describes it as a ‘lowly anticipated’ second album. Lowly anticipated maybe but highly effective, and an album that seems more compact and consistent than their debut. Ravioli Me Away are apparently now putting together an opera. They’ve already got me wanting to start another band.

Earth Moves - The Truth In Our Bodies 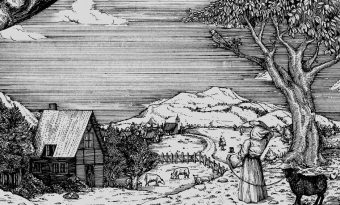 On The Truth In Our Bodies, Earth Moves wear their hearts so brazenly on their sleeves that they are basically just one big heart in an oversized shirt.
Read More