It would probably be tempting the fates, who seem to be in a pretty mischievous mood as it is, to say that the 21st century has reached its nadir this year. Indeed, as long as Iggy Pop is still alive and Marine Le Pen not in power, fate-tempting should be considered as impermissible as badger baiting. Let’s just get through the next six weeks or so without any major disasters, eh?

Perhaps we can spend the time viewing the aptly titled new video from Edinburgh-formed purveyors of ‘palatial pop’ Storm the Palace, which we are delighted to present the exclusive first play of today (see above). Their latest track ‘Nadir’ is a moodily affecting tour through the carefully locked away recesses of the psyche, performed with a sense of quotidian drama worthy of the likes of I Am Kloot.

The video, directed by Joseph Fitz and designed by Anna Yates, emphasises the sense of withdrawn alienation, with the band’s singer and main songwriter Sophie Dodds perennially isolated whether her house is full or empty. Or her former house, as it turns out…

“It’s a psychological thriller,” Dodds explains, “filmed in the North London house I’ve just moved out of (and, incidentally, that Joseph has just moved into). There are nods to some seriously cheesy stuff – The X Files, Bonnie Tyler’s ‘Total Eclipse of the Heart’ video, 70s horror films – but also a really classy colour-scheme inspired by the likes of Nan Goldin and Vilhelm Hammershoi. The whole thing plays on a fear of invasion. It was a masterful collaboration between Joseph’s cinematographic eye and production designer Anna Yates’ feel for staging, detail and colour.

“The song was first inspired by a visit to Snowshill – a house in the Cotswolds bought by an eccentric collector after WW1. He filled all the rooms with items for his collection and gave each one a name and a theme. At the very centre of the house was a creepy little room called ‘Nadir’, lit by a single candle. Nadir means ‘the lowest or most unsuccessful point in a situation’ and is also a term in astronomy meaning ‘the point on the celestial sphere directly below an observer’. I felt that it was an appropriate metaphor for that little part of your brain where you keep all the nasty stuff you don’t want other people to see – and how when you’re in that ‘dark place’ it always seems much vaster than everywhere else.”

The track is taken from Storm the Palace’s first full-length album, following 2015’s In Ruins EP and this year’s ‘La Lido / Cadillacs and Carousels’ AA single. The band’s first ever UK tour kicks off in a fortnight (in a maverick move, they have already toured the West Coast of America), while the album itself is due out next year. Frankly, 2017 seems like an improvement on 2016 already.

Premiere: Broker - 'The Grass Is Always Greener In Kreuzberg' 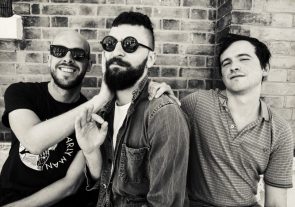