‘BRITNEY, BRITNEY, BRITNEY’. A slow, slurred wind escapes from a decaying oesophagus, creeping languidly over the chapped and fetid lips of an undead malevolent brute-mob hell bent on shafting you like a good’un. Their ever-nearing chants signal the disgusting arrival of Scottish noise-cunts Britney’s third album, lovingly titled Britn3y. A slippery, Lovecraftian wall of gob it is, and well worthy of a lick.

Rotting metallic power-chug ‘Fully Ben’ stops and starts like the loose groping limbs of the aforementioned manky gits as they lurch their shabby silhouettes into view, the dirty flesh-eating bastards wanting to tear your fucking face off with short bursts of manic belches. Screams fill the mind, as no-longer-internal organs and bony fingers are devoured whole by blunt soft teeth. Gingivitis gum cuddles shred and skinless digits thimble-thumble their way through soft living tissue, exposing the hot, sticky life force underneath.

The fuckers will gnaw the balls off any forsaken sod unlucky enough to be standing in their way as they barge and scram to the nearest bar or toilet with the aim of getting some fetid brown liquid to wash down the chunks of hair and flesh.

There’s a pleasantly palatable Eastern keyboard line on ‘Sneezefic’ that gets distorted by some nasty hobgoblin, mutating it into a disturbed, melting pus-satchel. ‘Witch Bucket’ is like having a screwdriver jammed into your ear sockets by a grinning sadistic goon whilst he pops a finger up your bum and encourages you to shit. As I say, dirty bastards.

‘Neon Python’ showcases the fucked up mentalness of Britney’s sound perfectly, exposing their particulars in all their naked, deformed beauty. There are skin striations and bones sticking out everywhere, and what the fuck is going on with the genitals? Still you’ll clutch it to your heart like a bitey, deformed uncle.

Mathy noise-punk comes at you from all angles throughout Britn3y’s brief 21 minutes. Battered keyboards, bass hideousness and drum whacks shunt together like bad skin grafts. The drumming is fucking intense and the bass is top-fucking-notch. ‘Sleep Now Dog Man’ is a warped piss-take instrumental. Foul reversed noises are screwed hard into your face by an ambivalent living turd. It ends with someone being violently sick. Literally. It’s a fucking glorious corporeal mangle.

Britn3y’s songs aren’t so much played as smashed against a brick wall, allowing you to feast on the small vestiges of destruction that shatter off with each slam. Nosh them down you fuckers. ‘Sonseed’ and ‘Bossmoggy’ cause an effect not unlike drowning in sick. There’s enough carrot and sweetcorn life-floats bobbing about the stomach grot to latch onto and just about keep your desperate gaping mouth from going under, but as you dip from air to discharge you can’t help but take on board delicious mouthfuls of evil bile scum.

‘I.I.A.H.S.W.E.S’ has a sexy confidence unbefitting of a rancid construct. It’s a bit like when Death From Above 1979 were good and not a flaming bag of dog shite, but with more death-sludge. It’s a right saucy minx. Keeping things rude, ‘3DPD’ starts like a cheeky disco banger before flinging itself nose-first into a flurry of screeching riffs and clattering, sloping into a final doom-dirge mire. The final onrush of violence, like a closing fist, that crushes any residual life from the cowering survivors who’ve possibly been hiding in bins or post-boxes.

The living, having ceased to be so any more, have been replaced by architectural remnants of flesh, relics of a time that once was but has now been reduced to visceral rubble and gleaming bone temples. Like Bones standing in skin, rather than wearing it. All that can be seen through the detritus and acrid hanging smoke is Britney, bashing away at their instruments, looking for more helpless victims of their savage attacks.

That and sick. Lots and lots of sick. 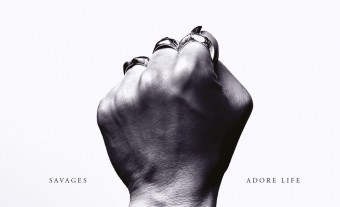 Savages' songwriting may have matured, but the muddy dirge that couches their latest album makes it an enervating rather than energising experience...
Read More