Tonight’s gig was a tough call, the first Thursday of the month being Spirit of Gravity, Brighton’s long running experimental music night which I normally go to. But tonight I required catharsis and checking Palehorse out online it seemed a good chance of that being delivered. I first became aware of Palehorse via The Quietus and, being something of a low end junkie, was intrigued by their double bass guitar sonic attack. There’s something about pummelling doom-laden noise rock that can clean the slate of the psyche, set the mental dials back to zero, and right now that’s what I require.

But first up we have Ghold who are pleasingly interesting, gratifyingly odd. The first piece they play (song just doesn’t seem appropriate a description) sees the three band members doing triple whispered vocals before exploding into full-on rock assault and then back again, riding it out on a drone noise mantra the likes of which most bands would play at the peak of a set but here is dropped as the opener. Outrageous.

There is a mash up of doom, prog, math/art rock and a heavy dose of wtf. It doesn’t feel contrived and they just sound like them. Impressive. Even with all the odd timings, dynamic shifts and bizarre interludes Ghold have a firm grip on their inner caveman and can lay down a tight-locked power groove and deliver balls-on rock.

Palehorse get off to a shaky start due to a half-baked soundman who seems unable to get a vocal microphone to work. The frontman has to pinch the keyboard player’s mic at first but later his mic is restored, which is great as it’s running through some warping FX. (Singers – take a leaf out of the Gibby Haynes handbook of sonic mayhem and get your mic patched through a bank of weird effects.) Anyway, vocals restored, the fun begins. 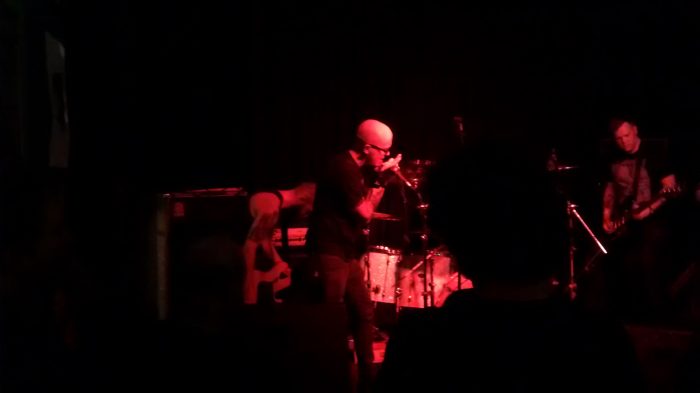 The twin bass assault is pleasingly crushing, the drummer hits his drums like he wants to hurt them, the analogue keyboard knob-twiddler is a study in ferocious concentration. The grooves are huge and lurching; I feel like I’m being immersed in a massive sound bath, cleansed to the bone.

The focus is the frontman though, who looks and sounds like he’s channelling demons from deep within, possessed and possessing the music. It’s very hard to tally up this whirlwind of violent kinetic energy with the mild-mannered, bald, bespectacled, softly spoken chap who appears between songs. He’s even thanking the soundman when he finally gets his mic back on whereas the rest of the audience are probably imagining flaying him right now.

And so it rolls on, powerful and unrelenting, ending with the singer in the audience, one moment slamming into the crowd the next moment hugging us. Which kind of sums Palehorse up – this is music hell-bent on transmuting your inner shit into something better, kinder, manageable. I wake up today feeling tired, hungover and much much better.

This Will Destroy You illuminate Oslo Hackney 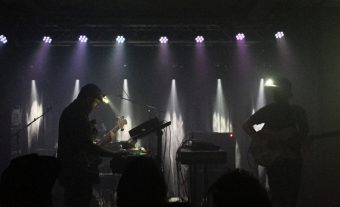 This Will Destroy You live up to their name when they train their beams on Oslo, at the expense of that incorrigible scourge - the gig talker...
Read More