Right, get yourself a tissue handy (or a hanky if that’s how you go about your business) as I’m about to start gushing like Gwyneth Paltrow receiving an award at one of those back-slapping ceremonies celebrating all the totally wicked and in-no-way-shit films she makes. I will gush liberally and steadily for about 700 words then you can go about your business.

I bloody love Of Ruin, the new album from gnarly noise duo Ghold. I bloody love it and I can’t get enough of it. It’s fucking brilliant – simple as.

Using just drums, bass and thundered dual vocals, Ghold (Paul Antony and Aleks Wilson) make a beautiful, battering racket. It’s ruddy savage. Of Ruin is 44 minutes of deep, rich, energetic hammering. ‘Tis the kind of album designed for words like relentless and bludgeoning, like an abusive ogre having a bad day at the office.

With a handful of EPs and cassettes lodged firmly under their grimy fingernails, Of Ruin is Ghold’s second album proper, released through the mucky creases of consciousness by the dirty heavy sods at Ritual Productions. Honestly there must be something in the water at the moment because 2015 has already seen the release of several excellent records, and it’s only bloody March.

Ghold have steadily been mining away at the (heavy) rock pits, collecting barrows full of praise as they go, since they sprouted in 2012. Last year they performed alongside Årabrot at the Windmill in Brixton (man alive that was a good gig), and they share their Nordic filth-brothers’ penchant for textured, shifting doom-noise.

Each of Of Ruin’s 6 songs has its own set of delightful highlights and violent moments like fevered dreams, but trust me when I say that ‘Partaken Incarnate’ is a fucking belter; a patchwork of frenetic drum blasts and tar-thick bass riff dredges. Coming home from the pub the other day I listened to the song over and over again, skipping back to re-listen to it like some sort of One Direction pop goyt. I was left slack-jawed at the triumphant metal vocal wail about two thirds in, bursting through the thick throaty roar which precedes it like an awesome phoenix. It’s so unexpected and righteous that it blew my tiny, pickled mind. What then follows is some topnotch hardcore bellowing, which will never fail to bring a smile to my miserable, sullen face. The wailing phoenix, never to return.

‘Pursed’ powers through its five-minute running time with the stomping force of a thousand platform-wearing elephant metalheads. The way the bass and drums melt together is immense; the first two minutes are almost industrial in their thumping propulsiveness. It’s one pacey bastard I tell you. Which is all the more surprising when it switches down a few gears, grinding to a slow strangling groove.

None of Of Ruins‘ six tracks stand still for too long or labour an idea. Well, being ‘doom’ there is a pre-requisite amount of sludgy repetition and lock-in groove, but these generic tools are used to create expectation and tension to great effect. Which is to say, the songs duck and dive like a dodgy one-legged cockney with an unlicensed market stall avoiding the rozzers. I’ll take what they have, £2 a pair.

‘Odic Force’ is an eleven-minute doom odyssey, like a psychedelic grim reaper getting down to The Melvins as Black Sabbath trickles out of a nearby broken TV, perpetually disintegrating and re-building like a self-conscious derelict building. Or Croydon.

So yeah, I fucking love this album. If, like me, you’re some sort of sick drunken troll who likes diving head first into the noisiest, most brutal pools of bile you can find then I have no doubt you will take this album, clutch it to your warm bosom and cherish it like an ugly child.

That said, if you’re the kind of person that gets off on banal shite like Mumford and Sons or enjoys watching those award-winning Gwyneth Paltrow movies whilst eating Spam from the tin, then Of Ruin may very well not be for you, because you’re a twat.

If it is for you, then you will drink it down, deep deep down. Now go find some tissues and get gushing with me. 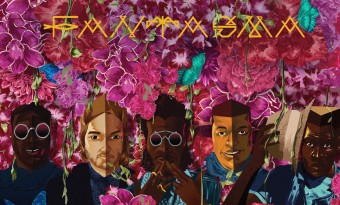 Spoek Mathambo's collaborative project Fantasma kicks down the borders and brings in the sunshine, but does the genre-hopping fluidity leave it sounding a little unhinged?
Read More