Though the headline may lead you to think otherwise, we can assure you that this is not the latest incarnation of Macauley Culkin’s pizza-themed Velvet Underground tribute band. (That did actually happen right? Or was it all just some crazy (melted) cheese dream…)

No, Druggy Pizza are the latest signing to Bristol indie label Stolen Body Records (home of Fruit Tones, Abjects and Al Lover among others), and we’re delighted to host their new video today.

‘In My Veins’ is taken from the label’s new split LP, which Druggy Pizza share with the equally bizarrely named PALBMA (which stands for ‘Peace And Love Barbershop Muhammed Ali’, obviously.) It’s a one-minute, eleven-second slice of piping-hot punk mayhem, with the sneering vocals layered over the thrashy guitars like hot toppings sliding off a burnt crust.

The video meanwhile is a nightmarish vision of a hexed nursery toy-box come to life, all garish plastic and grinning spooks. It goes with Druggy Pizza’s frenzied emissions like hot dough and [insert your favourite pizza topping here].

Head chef Cédric Bottacchi (who you may know as the main man in Dusty Mush) explains the Druggy Pizza recipe:

“It’s a kind of ‘outlet’ so I can do whatever I wanna do on my 4-track cassette recorder. But it’s also the name I use to create visual artwork like show posters, records artwork, logos… for Dusty Mush and friends. It started as a one man band thing – a bass drum, a guitar and vocals. Later for the single ‘Key Lighting’ I found a cheap keyboard in a friend’s attic so I decided to record a short EP around that cheesy sound. For the Chili Cheese Crust songs (on the split with PALBMA), during summer 2014, Romain (who plays bass in Dusty Mush) and I were super bored one day and decided to record something. On this one I wanted to create something super raw and brutal and capture this energy on my 4-track cassette recorder very quickly, so it took us only two days to write and record the songs together with Romain in his attic. Romain played guitar and I played drums, keyboard, second guitar and sang.”

So there you have it. Now cut yourself a slice of ‘In My Veins’, pre-order the album, and flood your system with Druggy Pizza… 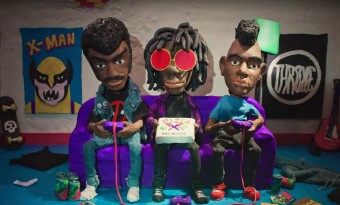