Australian synth-pop three piece Midnight Juggernauts have been around for the best part of a decade, but they only really came to my attention after I stumbled across the video to recent single ‘Ballad of the War Machines (a former Monitors pick of the week). Created to look like a lost art-pop relic from the Soviet Union, the band had Russian friends disseminate it across the country’s forums and message boards in an attempt to convince their countrymen that it was a genuine artefact. It didn’t really work, but the video, which features the band dressed as soldiers, messing around with a surreal collection of props and dancing really badly on top of Russian war planes, is still a winner.

Not as much of a winner as the song itself though. Seriously, this went beyond an ear-worm and became some sort of ear-anaconda, devouring my ears and leaving them trapped inside its slimy belly, unable (and unwilling) to escape. The amount of times I found myself unconsciously singing the chorus while walking down the street became untenable – there are only so many times you can take strangers giving you odd looks and a wide birth as you seemingly croon “Godspeed, travel well, fever through your body raising hell” at them. I was enjoying the song so much I actually had to restrict myself from listening to it, but the abstinence never lasted long. It was just too good. Every time I heard the rising vocal glissando just before the chorus, it took me back to being in the passenger seat of my Uncle’s car as he deliberately sped over inclines in the road. Butterflies, mate.

So needless to say I was looking forward to the release of ‘Uncanny Valley’, the band’s third album. The fact it was named after Masahiro Mori‘s theory about how androids will inspire utter revulsion when they reach the point of being a little too realistic, a subject I’d studied in the past, just heightened my anticipation. I was like Vladimir Nabokov after being given a really nice new net. I was craving more butterflies.

So is the album awash with Saturns and Mutated Spangles? Well, no. That’s not to say you return with an empty net, but there’s nothing that comes close to matching ‘Ballad…’ (which might be a good thing, as if I spend any more time singing surreal lyrics at strangers then I might get sectioned).

Things start extremely brightly though. Opener ‘HLC’ bristles with addictive tension, occasionally finding sweet release on a ‘reach for the lasers’ chorus. The production, as on the whole of the album, is immensely slick. With ‘Ballad…’ following immediately afterwards, the effect is richly disorientating, like gorging yourself on gourmet food and champagne after days without food.

The WhoMadeWho stylings of ‘Memorium’ manage to just about keep the pace too; the vocals are super deep, as if Macauley Culkin was mucking around with his Talkboy in the studio (a trick they later repeat on ‘Another Land’, which sounds like Daft Punk soundtracking a cartoon about space foxes). When combined with the disco bassline and upbeat tempo, it gives the impression of them mistaking valium for ecstasy before heading out raving. Sadly, ‘Streets of Babylon’ sees them slip into cheesy euro-pop territory. It might have just about passed muster with some Pet Shop Boys-style deadpan vocals, but here the singing and synths gloop into a sickly mess, with the drumbeat feeling like it’s pumping tartrazine into your heart. There’s a similar problem with ‘Sugar and Bullets’ – too much sugar, not enough bullets.

Luckily, ‘Master of Gold’ provides a pleasant moment of respite, like drifting down a neon river. A psychedelic heatwave of a track with big booming drums halfway through, it has a touch of former tourmates Tame Impala’s Beatle-fancying about it. Taking the tempo back up, ‘Systematic’ sees a synth line weave in and out like a violet sea snake, while the jovial arpeggios of ‘Deep Blue Lines’ leap up like grinning gophers.

The closing ‘Melodiya’ is as perfectly produced as everything else on the album; the ride cymbals are crisp, the synths sail through like graceful electro-swans and the harmonies are so tight it almost feels like they’re coming from one single, multi-faceted voice. Like the rest of the album though (sublime opening aside) it ultimately sounds like a professional exhibition of talent, when they should really be covering your balls in glitter and hanging them from the ceiling before embarking on a technicolour bliss-ride. Still, while there may not be too many butterflies here, the ones I still get from ‘Ballad’ still seem to be doing fine. One more time: “Godspeed, travel well…”

About Group - Between The Walls 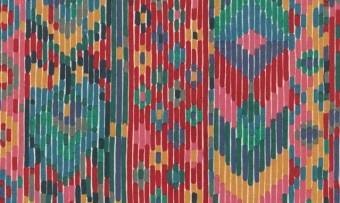 Hot Chip's Alexis Taylor teams up with Charles Hayward and others for a semi-improvised blowout...
Read More