It has been 16 years since Roots Manuva unleashed his debut album Brand New Second Hand (1999) on a British hip-hop scene still in embryo. Illustrating his tales of a murky, downtrodden London with warm, minimal production and a penchant for Briticisms, Rodney Smith’s first full-length would set the standard for a new generation of British hip-hop, desperate to step out from a decade-long shadow cast from across the Atlantic.

Any fears of a sophomore slump were to be short lived when the follow-up LP Run Come Save Me (2001) was released to critical acclaim just two years later. Lead single ‘Witness (1 Hope)’, with its squelchy bassline gallop gave Roots his first big hit. One part confessional to two parts vagabond-exultation, the track and accompanying album cemented him as the flag-bearer for a now flourishing British hip-hop movement.

Album three, the introspective and experimental Awfully Deep (2005), maintained the high watermark with Manuva dwelling on darker themes of a deteriorating mental health and the need for a well-earned break: “This could well’a be my last LP / I’ve had a good run / I’ve made a few G’s / I’ve had a bag of fun / I’ve smoked a few trees / Now I wanna rest my / knobbly knees.”

Unfortunately Awfully Deep signalled the end of an outstanding run, and the sense of foreboding that permeated the record would prove prophetic as the next two albums, Slime & Reason (2008) and the sprawling 4everevolution (2011) found Manuva struggling with a hotch-potch approach to both production and theme. The signature emphatic delivery that brought tracks like ‘Movements’ and ‘Join The Dots’ to life on previous records deserted him and was to be replaced with a listless drawl that relied too heavily on previously favoured cadences. It was as if when separated from a subject matter close to his heart, be it the filth of his beloved South London or the unwanted weight of carrying the torch for UK hip-hop, Manuva couldn’t instill any conviction in his output.

That is why Bleeds is such a triumphant achievement. Coming in at just 40 minutes across 10 tracks, this more concise offering sees Roots turn his eye to the inequalities of modern society and the self-destructive ills of the British psyche. The energetic gravel-ridden delivery that set Brand New Second Hand apart has returned and, now armed with subject matter he is clearly invested in, Bleeds is littered with standout tracks.

Deftly assembled from morbid strings and a reverb-drenched beat, opener ‘Hard Bastards’ sets the tone for the whole record with a scathing sermon on the cyclical nature of generational unemployment. “Kids are having kids, kids that will never work / Granddad never worked, daddy never worked / Now three generations don’t give a shit about work.” Manuva’s trademark dry wit is also back with aplomb, prefixing the main hook with a wry disclaimer: “It’s not me but I know a few bastards / And most broke cunts are all true bastards / And most rich cunts are even more bastards.”

Track two, ‘Crying’, delivers the most unhinged moment of an already dark record very early on. Proclaiming the fruits of a desolate self-analysis, Manuva sets these insights to a genuinely unnerving soundtrack of sub-bass and young children crying. “What I meant to mean is this world cannot be trusted / When I look inside my head and find it so disgusting.”

Lead single ‘Don’t Breathe Out’ provides the only real respite from the darkness. Uplifting washes of strings ride over endearing snapshots of a life at the bottom of the societal ladder. “Get to the black let’s get to the facts / The poor don’t relax the poor do funky soul clap.”

The dub inflections of ‘Stepping Hard’ hark back to Awfully Deep’s ‘A Haunting’, the latter’s stream of consciousness now replaced with astute reflections on the stresses and strains of ambition: “Mole hill or mountain what be you / Situations amounting stopping you / Reaching for the top so we gotta be careful / it’s so beautiful and I’m so tearful.”

There are a couple of mis-steps on the record but not from a quality perspective. The Four-Tet-produced ‘Facety 2-11’ has a jarring quality when heard in the context of the album progression. Its skip-rattle snare and hypnotic vocal refrain make for a decent song but it sits more like an afterthought that made the cut due to the big-name collaboration.

The same can be said for ‘One Thing’, although the razor-sharp wordplay of a new-money South Londoner living in Surrey more than justifies its place on the record: “Poached and scrambled, my preamble / Ambles over, no Land Rover / So what the heck are you doin’ in Surrey? / You don’t look new, you seem to ‘ate money.”

Rodney Smith closes his fifth album just as he started it. ‘Fighting For’ is a bleak, gospel-tinged observation of a society crumbling around him. Similarly to the fantastic ‘Dreamy Days’ from his second record, ‘Fighting For’ makes the most of a choice keyboard hook but this time the tone is conflicted. Instead of the triumphant “one man power house succeeding within the scene,” Roots is concerned with more pressing matters: “a war will arrive with no word of warning.”

What ties Bleeds together and puts it alongside early Roots Manuva records is its feeling of coherence. After Awfully Deep, it was as if the complex musical identity that revealed itself across three superb albums finally broke apart. Both Slime & Reason and 4everevolution suggested an artist struggling with a conflict of direction and a lack of drive. Rather than attempting to tick every musical box, Bleeds sees Smith narrow the scope of his production to an ominous minimalist sound that complements the album’s themes.

In shifting the lyrical focus onto the wounds of modern society as well as maintaining his trademark dark confessional, Manuva has written his best and most honest album in a decade. Welcome back Rodney, we missed you. 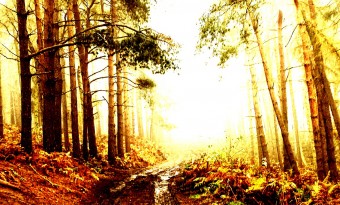