Dragging themselves from the prehistoric goop of a sludge-covered, decrepit volcanic cesspit, Early Mammal peak through the black ash clouds into the festering daylight of 2015 and gracefully release their third album, Take a Lover, hard into the miasma-strewn atmosphere, like an extended middle finger to a passing dinosaur age.

Early Mammal are not actually some vast, cave-dwelling, sabre-toothed mole casting aggressive aspersions on rapidly extincting lizards, but they are a very righteous three-piece from London who specialise primarily in rock; more specifically, spaced-out, blues-rock jams. Grooves are plucked and weaved like there’s no tomorrow, but there is, evolutionarily speaking.

Formed in the not very Triassic 2012, Early Mammal consist of Rob Herian on guitar and vocals, Ben Davis doing the drums and relative newcomer Ben Tat on the bass. The band quickly released two albums, Horror at Pleasure and My Fire, the following year. Take a Lover, released by the ever-excellent Riot Season records, was recorded at Dropout Studios over two days using long single takes, which appears to have allowed the band to experiment and improvise as they plough their musical furrow.

This laid-back recording process seeps from every claggy pore of the album, as the chilled out mood and hazy, groping structures of the songs wrap the listener in a thick fog of sun-drenched bliss. Put it like this, Take a Lover is so chilled it could kick off another ice age. Setting off yet another chain of mammal evolution at the expense of the aging dinosaur population. Giant lizards my arse, maybe they needed to chill out more.

If, unlike the uptight dinosaurs, kicking back and having a rather large drug-filled cigarette doobie-spliff is your thing then I imagine this will be right up your dank, acrid, smoke-painted lungs. Even if you aren’t a narcotic drug fiend and just like to listen to some fucking banging stoner rock, then this is the record for you my friend. Come close as I shall tell you about it in slightly more detail…

‘The Great German’ opens the album with an echo-y feedback-drenched riff, repeated until it explodes. It’s a mellow grower of a song and sets the pace and tone for the rest of the record. It’s like the journey of a wandering comet, crashing its way through the cosmos, knocking stars and interstellar debris aside until it hits the Earth’s surface, destroying all life within its vicinity. It powers into the hard, unknowing planetary dirt, causing devastating shock-waves that ripple through the bones.

‘Morning’ is wonderfully slow and low; a slinky, claustrophobic psych-blues crawl. I was genuinely surprised when I first heard it; it’s like a shifty quadruped getting down with his bad self. Similarly surprising is ‘Sigh On’, a lovely, gentle falsetto midnight whisper. It’s disarmingly delicate, and the two songs form a tantalising pocket of serenity amongst the big fuzz riffs and slow rock power.

Anyone expecting pointy-foreheaded troglodytes bashing away at instruments made out of the carved femur bones of fallen foes will be pleasantly taken aback. The palette of these virile brutes is less raw meat and more ceviche. Which is still rawish meat to be fair (but is delicious).

‘Glad is Night’ chugs along its running time like a powerful beast, slobbering froth-like moth goo as it devours all in its path. The hungry sod.

What you get here is eight slabs of finely cut stoner jams, evolved from the finest blend of all things stoner and developed into something that’s not so much an early mammal as a big, fuck-off rock-loving whale, recently discovered and dredged up from the bottom of the Arctic Sea. [Whales are technically mammals (distantly related to hippos dontcha know) but I’ll let it slide – zoology Ed]

This hairy whale seems to have only been listening to the mellow sound of crashing waves for several million years, gently beating a hypnotic rhythm over and over. It’s had so much cosmic audio that it’s evolved to excrete dirty riffs at will from its massive whaley blow-hole thing. Its wee fishy eyes look a bit red mind you, and there’s a funny smell about the place.

Album closers proper ‘Sak Bacle’ and ‘The Good GG / Return & Out’ couldn’t be more horizontal if they tried, both full of Kyuss-esque desert rock soloing and sand dune grooves, vocals slathered in delay. It’s a bloody great end to a very enjoyable record.

If this is the sound of early mammals then I look forward to hearing where evolution takes them next. 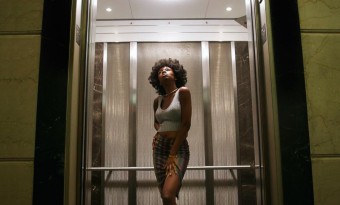