Rather than write a review of Blacklisters’ wonderfully unpleasant Adult, it might be easier for me to just come round to each and every one of your houses, look you square in the eye, holding your gaze in a strong but firm lock, and then spit in your face.

Not just a liquid spit either. A proper full-on, hacked-up phlegm-gob, right in the chops. If you’re not in when I knock, your next available loved one will do nicely. Once I’ve picked my teeth up off the floor, I’ll urinate on your front doorstep, making sure I get piss all over the door handle like a right snide little prick.

I won’t be doing this for my own amusement though – I hate violence. No, this random act of unpleasant, abject aggression is for your own benefit, and I’m just the conduit of salivated delivery. A righteous delivery ejected for your own good, which I’ll deposit in the hope that it might cause you a certain level of amped-up anger, an anger which will emotionally prepare you for the bizarre and intense world of Adult. An anger I assume the Blacklisters must have been feeling too when making this fucking cracker of an album.

Thus my gobby-act will make sense and you will later thank me. It’s a buzz-saw fury of guitar, bass, drums and insane slurring, and my lord is it dirty. If The Jesus Lizard lived up north and existed only on a diet of broken biscuits, vodka and amphetamines, they might’ve sounded like Blacklisters.

Adult is the second album from the Leeds-based noise-gits who comprise of Billy Mason Wood on vocals, Owen Griffiths on t’bass, Alistair Stobbart doing the drums and Dan Beesley on guitar. Though it’s every bit as frantic as their debut (BLKLSTRS), Adult adds a focus to the chaotic sounds, making for much leaner, meaner fists of fuckery. It’s 40 minutes of beautifully violent, cacophonous pummels.

‘Shirts’ is an onrush of terrifying bass-heavy noise punk bile, giving the effect of being repeatedly hit over the head with a bag of sick whilst a small balding man in leather fetish gear dry heaves in the corner, desperately trying to fill more sick bags to hit you with. ‘I’m not messing about here,’ vocalist Billy Mason Wood warns, and he’s fucking not.

‘I Knock Myself Out’ is a savage fury of wobbly-throwing guitar lashes that you just know will be a beast when played live. It thrashes about as though constrained by a straight jacket. There’s a dark manic humour underpinning every song on Adult, and with titles like ‘The Sadness of Axl Rose’, ‘Big Ticker’ and ‘Weasel Bastard’ you know you’re in the company of a band who aren’t going to fuck about with woodwind and 25-part vocal harmonies. This is direct aggro-noise that doesn’t give a shit about your sensitive hearing. Or your neighbours. Or their sensitive hearing.

Imagine Pissed Jeans if they’d rolled around the disused car park of a run-down council estate, causing liberal coverage of dog shit and broken glass, and you’d not be far off. If that doesn’t make you excited about Blacklisters then I really don’t know what to say to you. Maybe a good face-spitting would suffice?

‘Dream Boat’ slows the intense pace to a well moody grunge crawl. It’s a dark harassment by a pus-filled boil, slowly burning away at the back of the neck, too far from reach to lance. Nauseating in the best possible way. ‘Priss’ and ‘Downbeat’ close the album in crushing fashion and will leave you feeling abused and grubby long after the last down-tuned notes have left your impacted eardrums.

If you like metaphorically being spat on, covered in shit and pushed into a bin filled with burning dog hair for good luck, then my child you are in luck because this Blacklisters album is all that and more*. It’s more noisy and chaotic than a busy London train on a Monday morning and just as grimy. To a spiteful little sod like me this album is an absolute treat.

So I’ll hold off the spit for now as I’m a bit dry and I’ve enjoyed our little chat together. Happy listening, you complete bastards.

*It’s in fact none of those things, being music it’s incapable of such physical acts.

Ought - Sun Coming Down 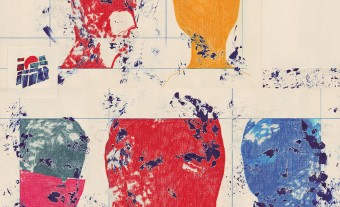 You don't have to worry about the sun going down on mercurial Canadian post-punks Ought, as their second album shows their star is rising rapidly...
Read More