A word of warning in case you ever go to see The Garden play live: they come out flying. Literally.

Recent track ‘U Want The Scoop?’ has barely begun before bassist and singer Wyatt Shears bounds out from backstage and dives straight into the crowd, accidentally clipping our photographer Moa Ceder with his fist on his way into the screaming crowd.

Welcome to The Garden. Watch it bring you to your sha na na na na knees. 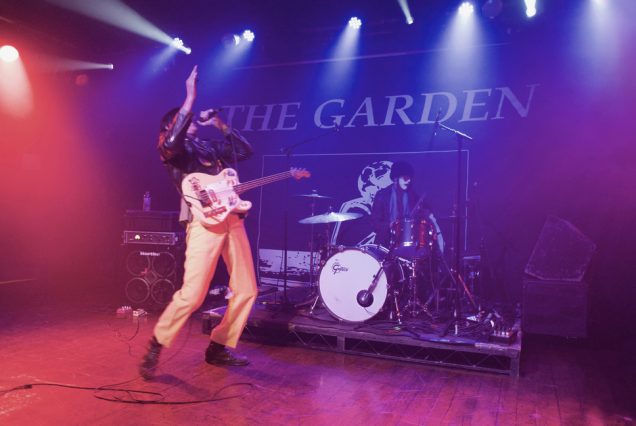 It’s an unfortunate introduction to the photo pit for someone doing gig photography for the first time, but Moa takes it on the chin. (Well, just below the eye actually – luckily it didn’t bruise.) The odd thing is that about twenty minutes before the show began I’d heard one eager young fan enthusiastically telling her friends, ‘I hope I get punched in the face tonight!’ Better bring your camera next time mate.

It’s a youthful crowd tonight. Looking around as Krista Papista starts her support set, it feels like we’re among the oldest people here at 32 – at least until I spot an elderly woman, who could be in her eighties, gently nodding along to the booming backing track. I wonder if she’s related to one of the performers or just a fan. Either way her presence is oddly reassuring.

If she’s part of the Papista family then she must be one chilled nan, given that Krista Papista performs much of her set topless and screaming. Her elegantly wasted disposition and regular hoarse howls of sweary angst are juxtaposed with pulsing pop beats, at one point creating the strange impression of Courtney Love fronting The Bloodhound Gang. Apart from the occasional exotic percussive break, it’s not really my plastic cup of overpriced red wine. The crowd generally seems to enjoy it though. Perhaps I’m just ten years too old.

The enthusiasm that greets The Garden is on another level. Three minutes is enough time for them to chin our photographer, power through the G-Funk hardcore of ‘U Got The Scoop’ and get the crowd so excited that the floor is literally shaking, and not just because of the bass. (Incidentally, it’s good to see a moshpit that is at least 50% female, if not more.) 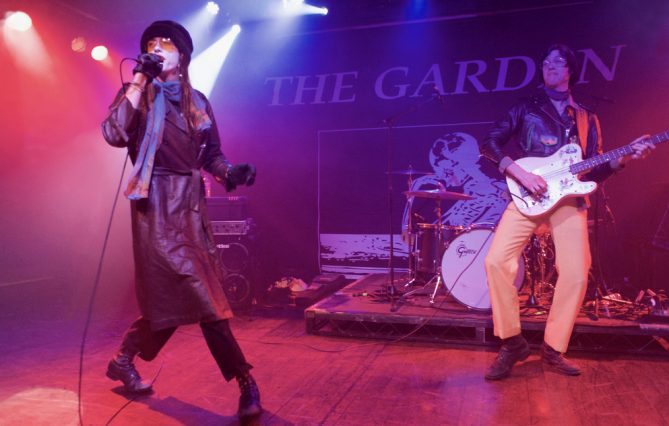 The frenetic opening pace finally settles with the distinctive organ of ‘Haha’, the track which gives its name to The Garden’s excellent last album. The crowd jump in unison and the band, who seem to have dressed as every character in The Breakfast Club at once (with an added splash of Marilyn Manson) are clearly taking the gig in their stride. 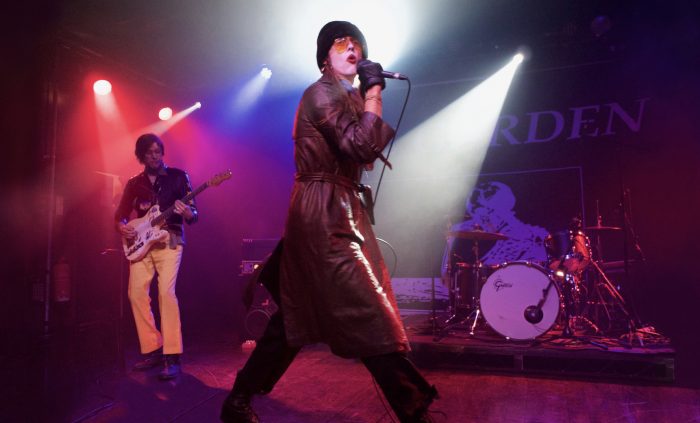 Admittedly it’s a stride that zig-zags maniacally, frequently breaking into an outright sprint. During new single ‘Clay’ Wyatt actually starts doing laps of the stage, while the music is just as unpredictable, taking in everything from Gold Panda to Bad Brains. Twin brother Fletcher Shears periodically abandons his drum kit to snatch the mic and start leaping off amps, and at one point an inflatable fish from Finding Nemo starts swimming through the crowd. It’s that kind of night. 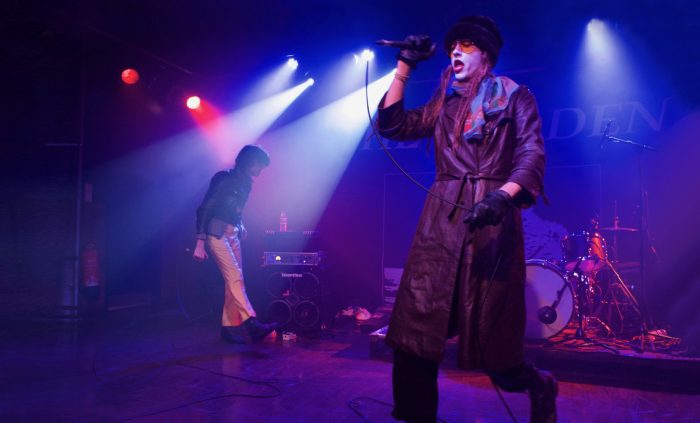 Other highlights include the jungle-tastic ‘Jester’s Game’, a version of ‘I Guess We’ll Never Know’ that summons the anarchic spirit of early Beastie Boys, and a crucial take on ‘Vexation’ that, as Moa points out, gets the crowd moving in such a way that it starts to resemble a simmering pan of water. 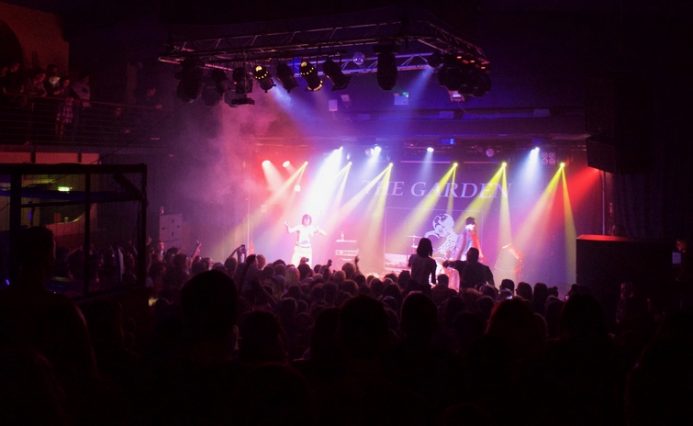 Fletcher’s hectic drumming is on point throughout, whereas Wyatt flips from drawling rap to tuneful crooning without hardly drawing breath. ‘Egg’ is one of the more melodic efforts, a composition that could’ve been penned by Julian Casablancas after taking all of the drugs. (N.B. The Garden are actually teetotal whereas the Strokes singer is by all accounts not, so more accurately it’s like Julian Casablancas after taking none of the drugs. Whatever, it works.)

A rollicking ride through ‘Crystal Clear’ takes us to the other end of the scale, the lightning drumming and gristly riffs giving us a glimpse of what nu metal might have sounded like if it hadn’t been so bloody awful. 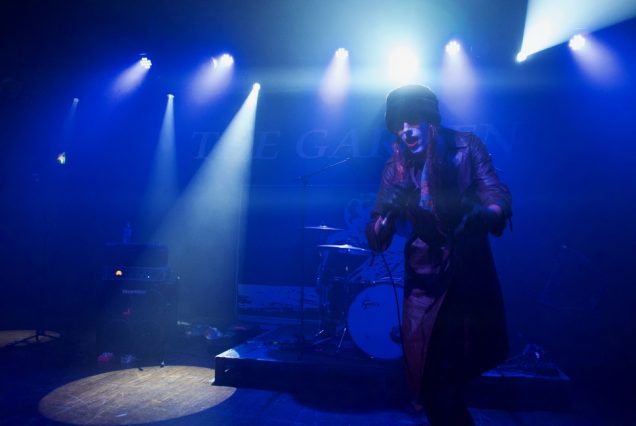 An encore of ‘All Smiles Over Here :)’ sees The Garden offering gratefully received handshakes to a good proportion of the crowd, before they finally end the mayhem with the 19-second punk blast of their virtual theme tune. Named after the conceptual ideal that has nurtured The Garden’s growth, ‘Vada Vada’ is ‘an idea that represents pure creative expression, that disregards all previously made genres and ideals’.

It’s a laudable motto, and it’s fair to say The Garden lived it tonight. 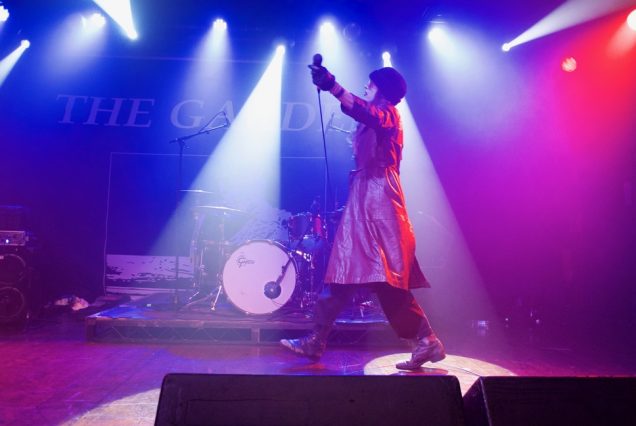 Afrobeat event of the decade? 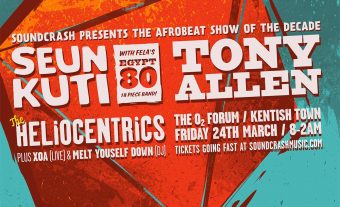 With Afrobeat legends Tony Allen and Seun Kuti appearing alongside some of London's freshest talent, the Kentish Town Forum is the place to be on March 24th...
Read More