If last year’s electronic scene was dominated by total adoption of house into the pop charts, then 2014 has been somewhat of a comeback for more idiosyncratic, artistic oeuvres. There is of course the Aphex Twin album, which has been a tour de force in making a musical release a real event (granted, not many people other than Mr Twin could dictate that sort of coverage), while Flying Lotus has something of a career highlight on the way (you’ll have to trust us on that one). In the past couple of weeks we’ve had Goat and The Bug’s new records doing that thing only they seem to be able to achieve, and the likes of Clap! Clap! and Chapelier Flou making really engaging – but not dumbed down – crossover dance records.

It’s in this family tree that LA based Anenon could be placed. An album “inspired by visual art” would normally send anyone other than glossy art mags to more inviting corners but giving Sagrada a spin is probably one of the most rewarding listens I’ve had this year.

There’s aplenty of minimal, jazzy, glitchy electronica out there, but it seems to be getting swallowed up by lethargic indie kids who five years ago would’ve started a Long Blondes support band but now go about trying to be Chet Faker (but without the songs). It’s either all a bit bashful and boring, or a bit self-aware and pretentious. Luckily Anenon creates music with a solid passion; you can feel the late nights of tweaking sounds here and there across the ten tracks which form the record. The skittish drums of ‘Karma’ clap, Actress-style, around penetrating bass groans. Wide-eyed synths sparkle with a lightness of touch that gives the whole thing a sort of MDMA-induced, speckled vision.

From the sound of it the ‘visual art’ he’s referencing are night-time landscapes, from cities plunged beneath constant day-glo auras (‘Lights and Rocks’) to the darkest ends of a silent countryside (‘Surface Points’). The title track enters like an unwanted techno visitor at a chilled out house party, but soon makes himself welcome by telling you a weird story about how he just got chased down the street by a mugger; the thuggish pace and aggressive tone of the beat jump along schizophrenically.

Dance-wise, there’s not much here which would be suitable for anything other than a sunrise set, ‘The Color White’, especially, casts a sort of Glastonbury-at-6am spell through the speakers. In truth, the reason I like the record is because it does a really basic thing of bringing itself together while never becoming muzak. Put this on in the background while you’re trying to do some work and you’ll find yourself concentrating – it’s music which gives you room to think, via landscapes which you’ll want to return to again and again. Do not playlist or shuffle it, put it on from start to finish and allow it to swallow you up. 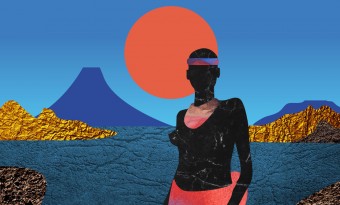