Blanck Mass’ Dumb Flesh has proved an enduringly engrossing album whether listened to through a soundsystem, on your stereo, or during the middle of a seven mile walk to work. Yet in the unlikely event that you were finding the record’s grooves wearing a bit thin, The Great Confuso EP helps inject a bit more juice into the Blanck Mass tank.

The one original track here, which gives the EP its name, is virtually an album in itself. An 18-minute, 18-second triptych featuring the redoubtable talents of Throbbing Gristle co-founder Genesis Breyer P-Orridge, it moves from Wipeout 2097 acid flushes to a KLF-esque beam of organ-led ambience, via a radioactive blast of distorted electronics and doom roars. As befits the title, it is both great and confuso-ing.

It’s joined by three remixes of Dumb Flesh tracks, of which G.B.P-O’s spine-tingling ‘DREAMACHINE MIX’ of ‘No Lite’ is probably the best (and certainly boasts the most unexpected recorder solo). The more ambient takes by Dalhous and Konx-Om-Pax are still more than listenable though, with the latter’s frosty take on the source material being appreciably cinematic. Still, the original music here is easily what excites most, so let’s hope there’s more of that to come soon… Kier Wiater Carnihan

From one of our favourite electronic artists of 2015 to our de facto favourite of 2014. While this acrostic EP doesn’t quite match Clap! Clap!’s masterful Tayi Bebba album for intensity, it shows a gently maturing sound that uses rhythmic dexterity to build some impressive musical constructions.

The descending kalimba and flippering percussion of ‘Ingeniousness’ provides an early highlight, although the record does seem to find Clap! Clap! at something of a crossroads. Certain tracks here succeed by using the trademark African samples as a launchpad rather than the main focus (the undulating club-friendly sounds of ‘Modesty’ does this particularly well), perhaps signalling a move away from overtly afro-centric music in future. Conversely however, the more complex beats of ‘Earnest’ are perhaps the most interesting on the EP. It’s an intriguing dilemma, yet whichever way Clap! Clap!’s compass is pointing the destination will surely remain intriguing as well. KWC

The first few skronky seconds of this EP alert you to the fact that something insufferably annoying may be about to occur, but luckily the rest of Guerilla Toss’ Flood Dosed is angular in all the right ways. The random keyboard stabs that pepper ‘Realistic Rabbit’ soon start to gel with the track’s bassy throbs, before it suddenly shifts into a sax-enhanced chant-a-long that recalls last year’s excellent Ravioli Me Away album.

The post-punk groove of ‘Ritual In Light’ travels down a similarly unpredictable temporal route, while containing the obligatory cowbell required by all DFA releases. ‘Polly’s Crystal’ is the stand-out though, orbiting around Kassie Carlson’s incantations with an enchanting approach that feels both reckless and totally self-assured at the same time. While the prevalence of krautrock-influenced bands at the moment is becoming wearying, Guerilla Toss feel like they’re on board with that era’s spirited, open-minded approach rather than just attempting a rehash of its sound. KWC

We all know not to judge a book by its cover, but you also can’t judge a record by its first track – even if in the digital age that seems to be happening more and more often. ‘Hudson River’, the first track on Jimmy Pé’s Fake Fantasy EP isn’t bad, but it’s also very similar to a lot of other trap-influenced stuff we regularly get sent.

However, as the record progresses, the full extent of Jimmy Pé’s artistry is revealed. ‘Vsezer’ is a perfect example, rolling up a piano motif in an electro-carpet and then chucking it off a cliff, while Ashley Abrman offers a sharp and seductive top-line. It’s a perfect mixture of dancefloor-damaging bass and tight, ear-catching songwriting.

The gloomy yet oddly fun trudge of ‘Elare’ follows, before the lurching title track gets right in your face like a massive hornet out on the piss. The fractured ‘Broken Clock’ then finishes things up, although I prefer the dappled breaks on the Daedelus remix that’s also included. Still, there’s more than enough on Fake Fantasy to understand why The Gaslamp Killer calls Jimmy Pé “one of a very small handful of producers on the planet that I’m checking for musically right now. Keep your ears on this man.” We will. KWC

We’re not sure exactly what the benefit of putting out three records in a week is, but that’s what San Francisco’s Kelley Stoltz did recently. His In Triangle Time album came out on Castle Face last week, while The Scuzzy Inputs Of Willie Weird appeared on Stroll On just seven days earlier. 4 Cuts came out alongside it and is, as the title suggests, comprised of four songs recorded at the same time as those albums that didn’t quite fit on either. These aren’t some cheap cast-offs though; in fact, you could make a decent argument for 4 Cuts being the finest record of the bunch.

It’s certainly a testament to those records that songs as good as ‘Put That In Your Pipe’ could be left off them. The opener is a cool and smoky opening ditty with a pinch of Mexican spice, drifting on the same gusting breeze as Damien Jurado’s last album. The rest of the EP doesn’t quite fly so high, but there’s still plenty of fun to be found amidst the jelly-set rock ‘n’ roll of ‘Peoples Park’ and ‘Some Things’, which is like a bubbly take on The Stranglers’ ‘Get A Grip On Yourself’. You suspect there are plenty of other acts who’d kill for off-cuts like these. KWC

It wasn’t until the end of the first track on Medication that I realised I wasn’t listening to the new Kurt Vile album (or perhaps, due to its upbeat tempo, his former band The War On Drugs). Having now listened to Mr. Vile’s latest, the difference between them now seems obvious – this record is far better. Palace Winter’s engine purrs smoothly throughout, whether slowly cruising through the nostalgic ‘Woke In The Night, The Phone Was Ringing’ or chugging through the scenic synths and cooing melodies of ‘Mention’.

If there’s a problem with Palace Winter, it’s not so much the way they travel but the route they take – only one of the five tracks on Medication clocks in at under five minutes. It’s another Kurt Vile / War On Drugs habit that Palace Winter would be better off shaking, especially on weaker tracks like ‘New Ghost’.

The percussion-free ‘Stockholm’ wields its length more assuredly though (no euphemism intended), slowly winding the EP down into a warm wash of sound. Kurt Vile may believe he’s goin’ down, but these guys are very much on the up. KWC

This Detroiter has been making lush, scuttling electronica for a while now, and we’re pretty big fans of that sort of stuff on The Monitors. His latest EP, Intermission, is sold as more of a career intermission than a musical one, though fans of the producer will still have plenty to like. Pretty keyboard flourishes are abound, the stoner half-time beats are hypnotic, and the eye for atmospheric detail is noticeable.

The tracks manage to sum themselves up: ‘City Living’ is a dense, populated track while ‘Gently’ is barely more than five loops of a couple of monotone synth pulsations. His long-running flirtation with hip-hop re-emerges on ‘Do My Thing’. While Jamie xx gets all the glory for the more chilled out side of club culture, I feel Shigeto has more of a right to claim to be any good at it. Nicholas Burman

The opening track of this record almost caused me to drop a right bollock recently. A lack of metadata meant I accidentally mistook it for a demo by FVC, whose imminent EP I recently played drums on, meaning I turned up to the studio having never even heard one of the tracks I was supposed to be recording. Under those circumstances, the fact I could play Wedding’s ‘Ruth’ by heart was of very little use.

Luckily the recording went without a hitch (and FVC was only mildly offended that I’d mistaken Thomas Craig’s voice for hers) so Wedding’s debut EP makes it onto this month’s EP Address without any negative associations on my part. In truth, I could never stay mad at a record like this anyway. The hazy DeMarco-isms of tracks like ‘Kaleidoscope View’ and the aforementioned ‘Ruth’ can’t help but beguile, and the aptly-titled ‘That Floatin’ Sound’ is similarly relaxing. By the time the lo-fi Beach House lullaby of ‘The Old House’ rolls around you’ll be fully subject to its sedative effect. Unless you’ve just accidentally learnt how to play the whole EP when you were supposed to be practicing something else instead… KWC

Single-Minded: WTF? Missy Elliott is BACK! 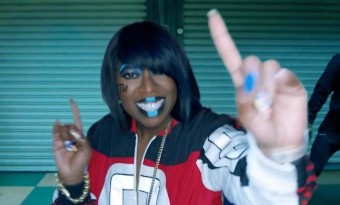 Comeback singles can often be a catastrophe, but Missy Elliott's return is a welcome reminder of EXACTLY how it's supposed to be done. Bow down everyone...
Read More