I’ve given my Rdio playlists some quirky but self-explanatory titles, such as “Feisty Women Rock” (PJ Harvey, Neneh Cherry, and other chicks who don’t take shit), “Melancholic and Profound” (Nick Drake, Low, you get the picture), “Hearty Nostalgia” (Credence Clearwater Revival, The Band, and a few comfortingly familiar guilty pleasures for when I need a sonic security blanket), and other self-indulgent themes that provide some order to the auditory landscape of my life.

I don’t have a collection called “Music To Slit My Wrists To”, but if and when I ever start one, The Soft Moon will definitely feature prominently. Not because it’s awful, but because that’s clearly the vibe they’re going for.

The name “soft moon” might seem like what you’d find on the label attached to a doe-eyed lunar-themed plush toy. But this Oakland trio in fact makes the exact kind of music that scowling parents want to keep their kids far away from, lest it poison their ambition (or at the very least, damage their eardrums). If refusing to clean up your room or tie your shoelaces isn’t enough to piss off your folks, this is the music for you.

Yet the crowd at the Hoxton Square Bar & Kitchen was anything but young – it was hard to mark out anyone younger than 25. Instead of angsty music for the young and frustrated, this instead was clearly heavily inspired by and drawn from the angry music of decades past, appealing to now grown-up 30-somethings in a comfortingly familiar way – in a way, a form of “hearty nostalgia”.

I scribbled “reminiscent of the best angry angst goth” on my notepad, but Wikipedia’s entry on The Soft Moon corrected me with the more appropriate genres the band should be slotted into: “post-punk”, “darkwave”, “noise rock”, and “EBM’ or “electronic body music” (which might sound like the label for boppy techno, but actually combines “post-industrial” with “synthpunk”).

Record shop jargon aside, what does that actually sound like? Heavy and slow 4/4 drums with thick basslines set the bedrock for the entire show, right from the first note of opening track ‘Inward’, off their third album Deeper 2015. Treacle-thick dark synths throughout flooded the room with viscerally tingling low frequencies (including from drum machine set within the drum kit). Assaultive noise, as I always say, can feel strangely soothing. There’s something weirdly comforting about being able to feel the loo seat shake when you’re two rooms over.

Plus, of course, lyrics scripted to slit your wrists to. “Take me far away / To escape myself / Cos I was born to suffer / It kills my mind / It kills me inside / Happens all the time” (“Far”, also off Deeper).

Plus, of course, teenage angst. “I don’t care what you say, you say / Living life my own way, own way” (‘Black’). The crowd may have been all grown up, but repetitions of these two stroppy lines for five straight minutes didn’t fail to chime with them. It’s clear many people who were teens in the ’90s harbour a bit of that bitter adolescent resentment somewhere deep down inside. Plucking those strings now and then probably relieves a bit of pent up psychological pressure, like a tiny but precisely placed acupuncture needle pricked into a stiff and aching muscle. Hearts may have felt temporarily young, but the embryonic mosh pit couldn’t quite muster the critical mass necessary to get going.

Still, the energy in the room undeniably kept building. Continuing with songs with such cheery titles as ‘Dead Love’, ‘Die Life’, and simply, ‘Wrong’, it becomes clear The Soft Moon might be doing everything they can to encapsulate the sound of abject, suffocated misery.

Now, some people – probably anyone over the age of 65 in this country, and most people the world over – cannot understand why some music is made to be ugly. Fiercely angry, violent and dark genres – from heavy metal to industrial, dirty techno and even the earliest punk – seem to be a curiosity of the past fifty years. Certainly most cultures on earth have come together with mourning rituals, and channelled their anger and rage collectively with the drums of war – this medieval military beat wouldn’t sound remotely out of place in certain modern metal tracks. But peacefully coming together to revel in angry music without any violent results seems to be a modern phenomenon.

Perhaps that’s the point: sometimes music is supposed to be dark, because sometimes life is dark – even when you’re not a frustrated teen. And maybe we find music like this – from thudding German krautrock to angry Scandinavian metal and screaming Japanese punk bands – in developed countries that have most erased physical discomforts from daily life.

For a full 90 minutes, it can be a bit much. But if you’re a fan – which clearly pretty much everyone in the room was – it seemed pretty intoxicating. And weirdly, rather cheering. It may have sounded like it belonged in a room of scowling kids with hair in their faces, but you could see smiles everywhere.

Zoe’s book, ‘Sex, Drugs and Rock ‘n’ Roll: The Science of Hedonism and the Hedonism of Science’, is available here.

How Primavera put a spring in our step... 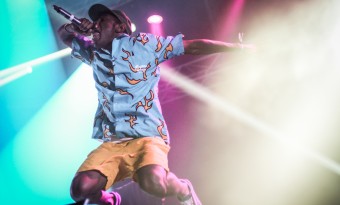 Is Primavera worth packing your bags and leaving the country for, or are you better off sticking with good old British festivals? We decided to find out...
Read More