Our regular column compiling club-friendly sounds that still make sense in your living room. This month Jamie Miller takes a trip back in time to Antwerp’s Prestige club with Peter Van Hoesen, and gets intimate with the latest EP from Organ Tapes…

Techno producer Peter Van Hoesen made this mix in 2010 but it was rediscovered recently after he uploaded it to SoundCloud. The concept of the mix is the DJ’s imagining of how his ideal mix would sound in Antwerp’s Prestige club, which provided formative musical experiences for Van Hoesen with a soundtrack of Belgian New Beat/EBM.

The sound of the New Beat presented here is based around British acts such as Nitzer Ebb and Fad Gadget. Their tracks may not have been tagged with the genre outside of the scene, but their sound came to influence those who frequented the Belgian clubs such as the one in Van Hoesen’s mind here. Homegrown tracks that feature, such as Snowy Red’s ‘Euroshima Wardance’, are seen as classics of the genre and they way they’re blended with the former is an interesting example of how scenes form around sounds heard in different geographical and cultural contexts. The slow groove, pounding drums and industrial slant means that the mix hangs together perfectly for anyone without necessary knowledge of the lesser known Belgian tracks here.

Ukrainian producer Vakula comes through here with a far more hard hitting mix than I expected, having anticipated something more along the lines of his recent album work on A Voyage Into Arcturus, a slightly lo-fi funky disco that can meander into something which I find a little ‘proggy guy enjoying his expensive machines too much’ to actually enjoy. Here we have some fairly straightforward Detroit techno capped off with some chunky electro at the end. This mix doesn’t have any possibility of frustrating in the way I worried it might as it pretty much just bangs.

Organ Tapes is a vocalist and producer from London who has now cropped up a few times on our round-up. Words Fall To Ground is his second official release of original music and it comes through Berlin label Creamcake, featuring work with Soda Plains, ssaliva and Malibu.

This EP may actually have more in common with the sounds currently coming out of the US than the UK to my ears, with the post-club 5am slurring, auto-tuned vocal calling to mind Young Thug at his most emotionally personal. The pop-focused rap and dembow-influenced production style makes the work a little more accessible than some of Organ Tapes’ previous mixtape projects, which were based around stitching together some slightly more disparate ideas. It’s bedroom level personal intimacy while being only a few experimental urges from something that could bother the mainstream.

The second effort for Trushmix series from Canadian producer and DJ LNS. She hasn’t had many releases but if you’re familiar with the diverse sounds on labels such as 1080p and Wania you’ll get an idea of where her esoteric take on techno sits. In an hour-and-a-half the mix glides seamlessly between electro, techno and IDM, with Bochum Welt’s ‘Melodie D’Aout’ and E-Dancer’s ‘World of Deep’ particular highlights from a very strong selection.

The mix starts slowly in an ambient pool before gradually pushing off downstream into stronger currents. Her first Trushmix was a bit of highlight of the series and the fact that this easily lives up to it, while pushing her sound forward, is high praise indeed. 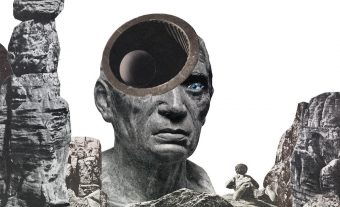 We take a look back at the best EPs released in spring, from the grubby krautrock of Kikagaku Moyo to the kaleidoscopic electronics of Herva...
Read More