Between Autumn and February every year, thousands of starlings flock to the Somerset Levels to roost in its trees. Before they settle for the Spring – between the pseudo mystical land surrounding Glastonbury and the ancient parkland of the Quantocks – they form murmurations, creating black, cloud-like forms in the sky. As a method to keep safely in numbers away from potential predators such as falcons, almost like clockwork they appear at once, and like a coordinated dance routine they take up the sky.

There must be something in the water affecting the human spectators below, as 2015 is seeing the South West currently overrun with music as dark and atmospheric as the murmurations themselves.

If you haven’t been keeping up with The Monitors (if not, why not?), then we’ll bring you up to date with Henry Blacker. Last year’s Hungry Dogs Will Eat Dirty Puddings, released via Riot Season last year, was one of those records which didn’t so much welcome you in as dare you to enter. Bringing in a few death metal influences, Hungry Dogs… certainly makes you either go “ooowww” or “arrghhh”. Indeed, we liked it so much we put in our Albums of the Year list, with Luke O’Dwyer calling it “unhinged and heavy as a motherfucker, just how it should be. Absolute class!”

I wouldn’t really expect someone who makes such loud and expressive music as Joe Thompson, who plays bass in Henry Blacker, to necessarily live in such calm surroundings (spot a picture of a starling murmuration adorning their Facebook page). Thompson’s other band (in which he also plays bass), Hey Colossus, are just about to release their seventh album on Rocket Recordings, and have been an entity since 2003. Lead track ‘Sisters And Brothers’ sounds like Nick Cave on a particularly bad/awesome acid trip (depending on how you hear it). Two thirds Hey Colossus still live in London, and Thompson informs me that their physical locations have little influence on their music.

However, he does admit that two tunes reference their location, ‘The Drang’ and ‘There Ain’t No Love In The Mallet’. He precedes that with a description of his first drive to rehearsal after he’d left the Big Smoke:

“I moved here eight years ago, having lived in and around London all my life. About a week after living down here I drove across the levels to a rehearsal – in another band we were doing at the time – and was terrified of the space… it seemed endless… My dad still says “I like to exercise my eyes”, meaning “see further than the next massive building.” And having been surrounded by massive buildings all my life, that drive almost made me move straight back to London. Whatever the opposite of claustrophobia is, in that moment, I had it.” [It’s ‘agoraphobia’, in case you were wondering – Ed.]

Hey Colossus singer and guitarist Tim Farthing muses on what got him into the noisier side of things. “I think I assumed a lot of the noisier bands I first liked – Killdozer, Big Black, Shorty, Buttholes – were rural bands. Wrongly, as it turned out. But they all had that crazed-backwater-moonshine thing going on that I definitely responded to as a country lad. But mostly it was (and still is) the racket.” When I ask if there’s any way the genre (as loose as my description is) has entered mainstream culture, he asks: “Are they still selling Burzum T-shirts in Sports Direct?”

The darkness started setting in around Bristol in 2011, as the Howling Owl collective began to produce fanzines and tapes. Not that the city was previously known for its lightness, being the birthplace of trip-hop and a sanctuary for the booming snares of drum ’n’ bass. Formed by the band Spectres, fresh-faced from a pretty standard Somerset village where their brand of At The Drive-In inspired rock was more than a little incongruous, Howling Owl has gone from DIY events in church crypts to a label and promoter team proper.

Since their inception, the label’s released records by the likes of the stunningly melancholic but equally uplifting Oliver Wilde, and put on shows at Bristol’s premiere gallery the Arnolfini, featuring everything from techno to experimental rock. In the meantime, the band went from sounding like a very good impersonation of something heavy to something else entirely. Come 2014 and, after being signed up by legendary shoegaze label Sonic Cathedral, they teased the arrival their debut LP with ‘Where Flies Sleep’, a brooding, antagonistic punch of a track. It’s less of a single, more a battering you’re willing to take.

Howling Owl’s addition to this noisy landscape doesn’t stop there. I remember first seeing The Naturals at all ages shows in the area about six years ago. Back then they were a bit of a racket, but nothing your parents wouldn’t put up with in the car. After spending a couple of years hidden away (although probably just around the Stokes Croft Road) and recording with production help from Howling Owl cohorts Dom Mitchison (from Velcro Hooks) and Hugo Bishop (from Oliver Wilde’s band), the group which are finally getting around to releasing an album on the label.

The debut track from the record, ‘2HGS’, is all pulverising drums, distant vocals and disorientating noisescapes. It’s not aggressive like Spectres, but more similar to a radio picking up alien signals – a strange, distant sort of worldview. “In the studio we focused primarily on the live aspect,” Felix Drake from the band tells me, “getting it to sound like four guys in a room playing together, then we were able to go into mixing with a much more electro-centric head on. Mixing with Seb Gainsborough (aka Vessel) helped a lot, he seems to have an encyclopaedic knowledge of reverbs and plugins and all that jazz, which is why we wanted to work with him in the first place. He was able to apply his methods of making sounds onto our recordings – a beautiful, sensual marriage.”

Why would a younger band go for a more gritty, reverberated sound? The likes of Dublin’s Girl Band are already giving the style an impetus it’s been missing for a while. “We think you’d have to put it down to two main factors – the music that we’ve grown up listening to and the environment that we write and record in,” October Drift say when asked why they lean towards the heavier end of the spectrum. “We’ve always enjoyed listening to big guitar bands like Smashing Pumpkins and we guess certain aspects of their music has rubbed off on us. Also the studio that we record in is dull, dingy and in quite an isolated location, which probably adds to the darkness of our music.”

October Drift originate from Somerset but are something of an unknown quantity at the moment, having just released their first tune proper, ‘Whoever’. They’ve been keeping busy on the gig circuit though, having recently sold out two dates in Sheffield and one at the Louisiana in Bristol. Their take on the wall-of-sound thing comes with a little more optimism than the rest, the moodiness put through a more melodic, My Bloody Valentine-esque kaleidoscope, the defining factor being the cleaner and more defined vocals.

Not that it’s all rainbows. In the song, singer Kiran croons “are we a grain of sand in an endless desert?” over an Amen Break-styled drum beat and the squealing feedback of a guitar ready to pop. “We don’t think there’s a limit to how big a four-piece can sound. Every time we write a new song, it seems to sound bigger and thicker than the song before… With samplers and different pedals and effects, you can get a really rich sound that seems greater than the amount of instruments present. You’re only really limited by how creatively you can use those instruments.”

In the suburbs and city streets of the South West, it seems (give or take a bass player or two) the music takes as many cues from the sparse but rolling landscapes than the four wall limitations of the venues. In any case, a storm is brewing. Just make sure you’ve turned your speakers up.

Most of the featured bands are touring in the near future, check out dates and release info over at the following links: 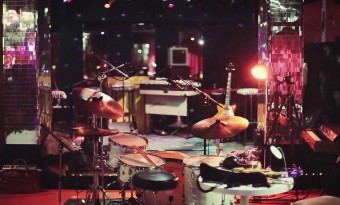 The Monitors are proud to unveil the UK premiere of a documentary about one of our favourite albums of last year, the 'blind date' between Halasan Bazar & Tara King th., plus an exclusive interview with both parties...
Read More