Back in 2009, depraved animator David ‘Fat-Pie’ Firth produced a short sketch for the BBC ridiculing contemporary pop trends and cultural soothsayers. Five years on and it’s still relevant; when Presenter “Rockin” Reece Undercut asks the public what they want to hear, the response is: “Something that sounds like the music I already listen to, but with different words,” while style advice dictates that “having a bloodshot right eye is expected to be mildly fashionable in early spring” (amusingly, a virulent strain of conjunctivitis meant that a large proportion of my friends did indeed sport this look earlier in the year).

After watching it, two questions arose. 1) What the hell happened to David Firth? 2) Why the hell isn’t he regularly on my television screen? Well, the new video from Flying Lotus answers both of them.

See, in contrast to the reasonably gentle satire above, most of David Firth’s creative output is of the type usually deemed ‘not safe for work’. Although that doesn’t do it justice, as it’s not really safe for anywhere else either. His characters, most infamously the rusty spoon fetishist Salad Fingers, tend to exist in bleak, bloody and unnervingly surreal worlds, where a severed head or burnt child is only ever seconds away.

Which obviously makes him the perfect choice to create a music video for Halloween, and noted cartoon fan Steve ‘Flying Lotus’ Ellison (who has previously released music via twisted US animated network Adult Swim, where this video is to premiere tonight) has dragged Firth out of whatever dank cave he’s been eating beetles in to enlist his singular talents – with predictably unpleasant results.

So how does Firth repay Ellison for this generous offer? Well, he doesn’t so much bite the hand that feeds him as chop off the head it’s attached too and cleave its skull into sticky slices. What a bastard.

It works though, not least because this particular FlyLo number, a creepily minimal, quietly mournful track, is pretty similar to the music Firth normally uses (which indeed is often by Ellison’s labelmates on Warp, alongside Firth’s own compositions under the name Locust Toybox). It’s the sort of music you can imagine bruised mutant children touching themselves to.

Which, funnily enough, is what happens in the video. You can ‘enjoy’ the results above, although be warned if you’re tucking into some steaming porridge, as I was, when you press play, lest you want to see it swiftly returned to the bowl from whence it came. While the animation style is a little different from Firth’s more cartoony efforts, it only serves to make the whole thing more queasily visceral.

David Firth has now uploaded his own animated introduction to the video, which you can view below…

Moon Hooch - it has to be seen to be believed! 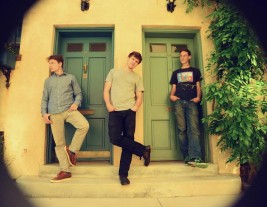 After hearing a load of this lot you'll feel like you've necked a bottle of moonshine.
Read More